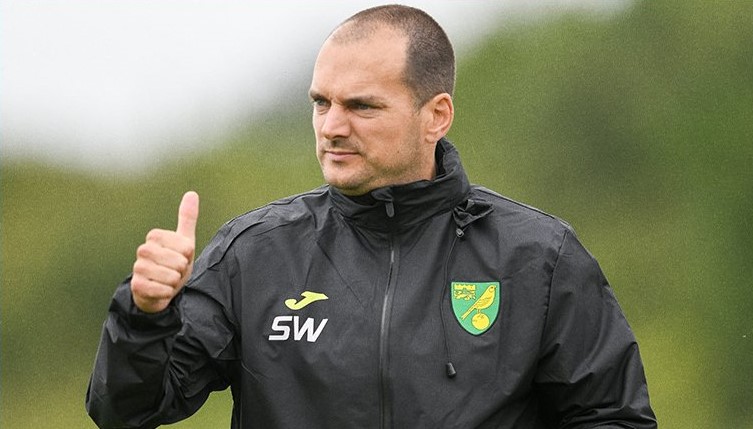 I have to venture into the City around once a fortnight for business and I’m sure I’m not alone in that amongst the MFW fraternity – a few of you poor devils will have to go in every day for work, of course.

There’s something to be said for what is more or less retirement I guess, as it means I don’t have to go to Norwich on non-matchdays all that often these days, although I always enjoy it when I do.

Mrs P enjoys a snout around the shops, so we normally park in Anglia Square. I peg it up to London Street while she enjoys the dubious delights of QD, Roys or the Lanes while also dropping into some charity shops looking for things she can upcycle. If she’s got a few bob, she might divert into Jarrolds on occasions

This generally means I have exactly an hour to perform my own necessary transactions. Racing back to the car in mid-October I happened to notice an NCFC training jacket in the window of the new St Martin’s charity outlet with the letters *SW* on it. It was a Monday and the shop was shut. I kind of forgot about it.

This time last week my meeting at Bank Plain was so short and sweet that I had time to venture to the market to hopefully see the Bowles family at On the Stall City to buy one of their misprinted NCFC tops for two whole quid. I wanted it to cut the badge off to sew on to a plain black quilted jacket of mine. But stall #13 was closed.

Somewhat disappointed, I headed back to Anglia Square and lo and behold – the St Martin’s shop was open. I thought I’d go in and ask what happened to the *SW* coat and was told by the very friendly manager that it sold extremely quickly “for an undisclosed fee”. We had a chat and I asked him if he had any City shirt in any condition with the badge intact.

His assistant said “no chance”, adding that she’d never seen a NCFC item in the six weeks she had been working there apart from the mysterious ‘SW’ one – there was no confirmation from her that it was Stuart Webber’s either.

Then quite literally the curtains opened and a colleague who had obviously been earwigging behind them emerged from the plush velvet that shielded the back room and said: “This coat came in last night but the zip’s bust”.

Manager and assistant put their paws on said coat and confirmed the zip was as dysfunctional as me on the train back from Wembley in 2015. The badge was in the shadow style too so of no use to my nefarious purpose. The manager turned to me and said: “a couple of quid?” without any hope in his heart.

I gave him three, thinking it would make a good dog snuggle if nothing else.

Sue took one look and gave me some verbal for buying it but later had a second thought, remembering some mystical science she’d previously picked up online. It involved a pair of pliers and some candle wax.

Three paper McDonalds napkins and a two pence coin removed from the pockets followed by a cool wash in the Bosch followed by a three day hang in the woodshed to dry and the beast will be available for me to wear against Southampton on Saturday, where Mystic Kev and others will see it in all it’s restored glory. And fully zipped up, too – it’ll be cold that day, for sure.

Genuinely out of boredom I looked online and discovered it’s still available to buy from the Canary Store for a considerably larger amount than three whole quid. It’s this season’s issue and is seriously warm with a great hood that actually serves its purpose, which not all official merch, from any club, does of course.

I think I’d better drop a further donation into St Martin’s cos if you get lucky, remember where your luck came from.

This music clip arrives courtesy of probably the finest lyricist of my generation.