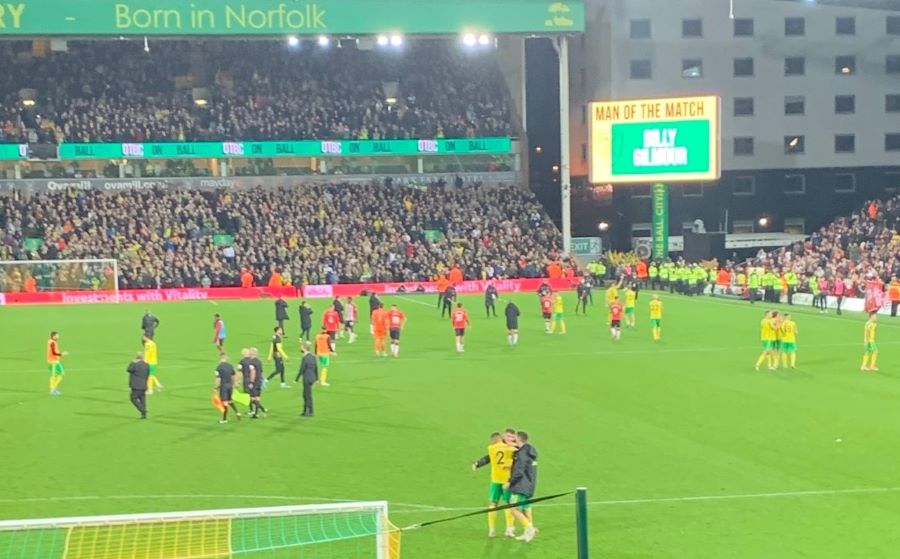 It didn’t take long for Dean Smith to be afforded a demonstration of why City’s goal difference was -21 going into the game.

Hesitancy, missed tackles, missed opportunities to clear, ball-watching, you name it… the full gamut of defensive cock-ups Norwich City-style were on show as Che Adams bundled his way through the Keystone Cops before side-footing past Tim Krul.

The more things change, the more they stay the same.

Except they didn’t. Not this time.

The response took just three minutes and you just know when Teemu Pukki buries an acute near-post header it’s not going to be a run-of-the-mill day, even if for the 38 minutes that followed it looked very much that way.

While the lads took it upon themselves to give Dean that perfect demo of their defensive frailties in the opening four minutes, for the rest of the half, they went for the *let’s show the new boss why we’re so easy to play against* part of his Carrow Road initiation.

It wasn’t an easy watch for those of us in the stands, so one can only imagine what was going through the minds of Messrs Smith and Shakespeare.

That type of inaction, passiveness and lack of aggression is usually reserved for Chelsea, Man City and co. but here we were rolling the red carpet out for Southampton. Submissiveness on a level usually only associated with Cabinet meetings.

The time and space afforded to the excellent James Ward-Prowse and Oriel Romeu was only going to end one way; a half of nothing but backs-to-the-wall defending interspersed with some ‘hot potato’ City passing on the rare occasions the Saints coughed up possession.

To have gone in at half-time level in those circumstances was a triumph. A schooling of epic proportion, and only later did it become clear how vital that Tim Krul save to stop Adams making it 2-0 was. Match-winning.

Oh to have been a fly on that dressing room wall.

But whatever collection of words were delivered, they worked. Brilliantly. I don’t imagine, on this occasion, it was a Shakespearean soliloquy.

Todd Cantwell, who was so far off the pace he appeared to be playing in US Eastern Time, was the one to be hooked but it really could have been one of about seven and, in fairness to Cantwell, his rustiness was clearly borne of being an absentee for most of the season.

Billy Gilmour was among the group who could have had no complaints if they had been the subject of the hook, but was also among those who responded magnificently to what had been said.

The impact was almost instant. From Martin Atkinson’s whistle, there was an extra edge and sharpness to everything City did. Instead of standing off and admiring the qualities of Ward-Prowse and Romeu, the duo were pressed and denied time and space to get their heads up.

Teemu Pukki was, all of a sudden, given some structured support in a high press, and a Saints defence that throughout the first half was able to pass the ball out under little pressure was being squeezed and harassed. As a unit, City shifted a few yards higher up the pitch and coupled with an intensity level that was doubled, the whole feel of the game changed.

In the stands too, where the first-half had been watched in near-silence, there was an appreciation that whatever had been said at half-time had had an impact. 50/50s were being won, so too second balls, and it just grew. It was no longer a matter of when Southampton would get a second.

Everything happened that little bit quicker and with Josh Sargent being the replacee of Cantwell, there was an extra physical and robust presence to disrupt the Saints defence down their left side. As a result of moving to City’s left, Milot Rashica too looked more comfortable. It started to click.

So significant were the improvements in City’s performance level, when the goal came it was deserved. Pukki had earlier stung the palms of McCarthy with a shot he’d tried to squeeze into that near post, but the Saints keeper was unable to stop Grant Hanley downward header in that same corner that luckily skipped up off the turf.

It triggered the first proper outbreak of pandemonium seen inside Carrow Road since February 2020. It was joyous.

Of course, there were another 11 minutes plus injury-time to endure, and bloody nerve-shredding they were too, especially with Ward-Prowse arcing in some outstanding set-piece deliveries, but it felt like, for once, it was going to be our day.

And it was our day. A brilliant day.

Credit of course goes to Smith and Shakespeare for addressing perfectly what needed to be addressed but so too to the players who implemented the changes and somehow forged a win out of what appeared an unwinnable position.

Those who’ve played the game, at any level, will be acutely aware of how difficult it is to raise yourselves from such a low base, but to do it so successfully in those circumstances and under that pressure was extraordinary.

In that second 45, for the first time all season, we looked like a Premier League football team.

The trick for Smith and Shakespeare is obviously how to extract that level of performance week in, week out, but to have done it from a standing start against a good Southampton side should do wonders for the belief in this group.

Also, the fact the new managerial team was able to bring about a drastic change in the space of a 15 chat should be enough to convince the group they are indeed in safe, reliable hands.

It’s too early to get too excited of course but for the Dean Smith era to open with a win in such stirring circumstances was all any of us could ask.

Welcome aboard Dean and Craig.

Christos Tzolis has changed his PFP and removed FC Twente from his bio. #ncfc

I'm so jealous of Wrexham because of @VancityReynolds involvement. It's a wonderful story. Someone needs to invite @RealHughJackman down to Carrow Road 😊 #ncfc

Past 2 weeks has probably been the best time of my life!! ⚽️ #ncfc #COYD