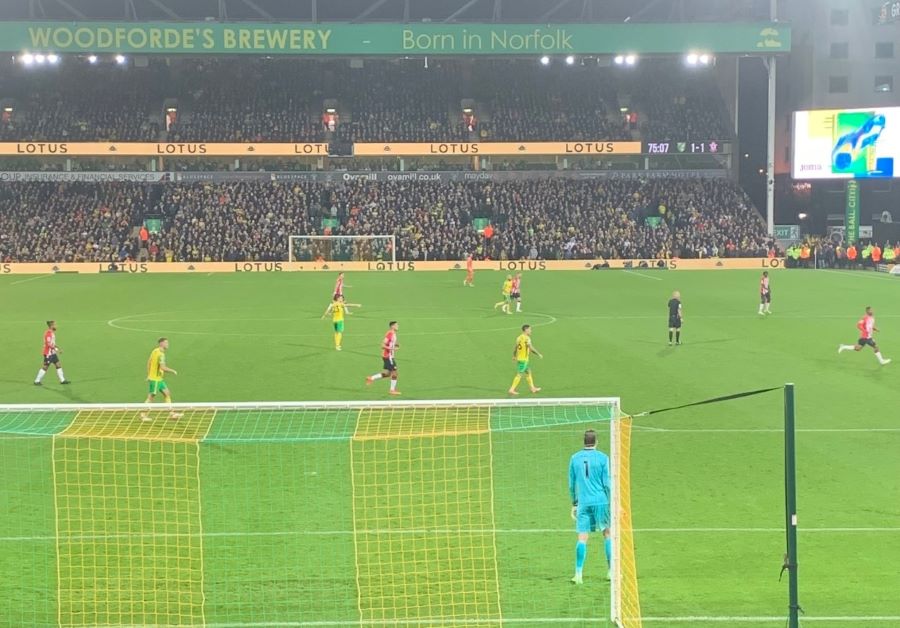 So much seemed to have changed since I sat down to pen my words on the City victory at Brentford. Daniel Farke gone. Dean Smith in. Todd Cantwell and Billy Gilmour in from the wilderness and a feeling of cautious, careful optimism around Carrow Road.

The feeling lasted precisely three minutes. Other than a brief moment where Todd Cantwell had possession, before falling to the floor clutching his ankle, that three minutes was all Southampton, before Che Adams forced his way past three City defenders and tucked the ball past Tim Krul.

This was not on the script.

The Canary faithful tried to rouse their team, but few expected such an immediate response.

Rashica, playing on the right tracked Walker-Peters back. The Southampton player went to ground, expecting to win a free-kick but play was allowed to continue. MaxAarons picked up the ball and played it through to Milot Rashica. The pair advanced up the City right before Rashica returned the compliment. Aarons kept the ball in and played in a delicious cross for those two rarest things: A headed Teemu Pukki goal and a City Premier League equalizer.

The goal was a rare highlight in a first-half utterly dominated by the visitors.  Too many times the Saints were able to pass their way through, round and over the City midfield.  They were particularly effective in finding the gaps between City’s full-backs and the covering midfielders. Too many times they were able to switch the play with raking diagonal balls.

As the half wore on, Smith must have observed most clearly the reasons for the exile of the much-vaunted Gilmour and Cantwell; the Chelsea loanee repeatedly failing to track his runner back, the Dereham Deco losing possession repeatedly in key areas.

On the rare occasion the City ventured forward, the way was barred and an audible groan emanated from the crowd as the ball found its way back to Krul. Much like previous campaigns, Pukki cut an isolated figure, fed a diet of desperately cleared long balls. It wasn’t pretty.

At half time it was 66% possession to the Saints. One shot on target for City.

Who knows what happened in the dressing room at halftime, but the second half saw JoshSargent emerge in place of Cantwell and a very definite 4-3-3 with Rashica left and Sargent right.  And from the outset, it was a very different side. City pressed high and forced errors from the visitors’ backline.  Pukki forced the keeper to give it away to Sargent, who played in Aarons but the ball into the box was delayed and the danger was cleared.

Southampton persisted with the switching diagonal ball but this half, with a higher back line City were more able to intercept the balls – Brandon Williams, in particular, proving particularly effective.

This half it was Southampton who struggled. City were first to almost every ball and Gilmour proved that he is way more effective in a team that is on the front foot, rather than chasing back. Sargent was looking lively on the right whilst Rashica was clearly more comfortable on the left.

Sargent seemed full of energy – losing possession on the edge of the Southampton area, he chased all the way back to midway in the City half catching and halting the Southampton counter.

Rashica was coming to the fore. Mathias Normann volleyed a superb forward ball into space. Few in the stadium thought the City wide man would get near the ball, let alone catch it, cross it and win a corner.

The only threat posed by Southampton came from hesitancy in the City backline – Grant Hanley particularly being caught several times, too ponderous in possession – but these were lapses in a half totally dominated by the players in yellow.

It seemed only a matter of time before they were rewarded. After 75 minutes, Pukki created the clearest chance yet.  Gilmour played the ball to the prolific Finn who had options in the box. He chose to go it alone and unleashed a shot to the near post that was beaten away for a corner.

From the corner, the ball was cleared but City retained and controlled possession. Williams tried to play a killer ball through to Pukki but it was intercepted. City forced a turnover again and Rashica found space down the left before his cross was blocked for another City corner. Rashica swung a swirling ball to the back post where Hanley rose to nod home to make it 2-1.

With 15 minutes to go, it was only to be expected that Southampton would respond but the City defence looked organized and resolute, although somewhat desperate at times. Gilmour gave way for the experience of Lukas Rupp who immediately relieved the pressure with a run down the right. Whilst City were forced back, they largely prevented Southampton from mounting a serious threat upon Krul’s goal.

On 89 minutes, the final occupant of the Colney naughty stair was released as ChristosTzolis replaced Rashica, who had had by far his most effective game in a canary yellow shirt. Moments later, it became clear that the gods were smiling on NR1. Ward-Prowse played a delightful diagonal into the City box, Walcott rose high but nodded his header just wide.

In the dying moments, Normann conceded a tactical foul as Southampton pushed forward.  The free-kick was played in and as it was headed clear, the final whistle blew.  Carrow Road erupted in a mixture of relief and delight.

Dean Smith will have learned so much in those 90 minutes at Carrow Road. Questions remain about key individuals.  The rehabilitation of Cantwell remains a topic, if I may be permitted to use a Farke-ism, and likewise the role of Gilmour in a team on the back foot.

However, there was also much to be encouraged about. The next team selection suddenly becomes even more intriguing than the last and City, finally off the bottom, can go forward with two successive victories for the first time in the Premier League for quite some time.