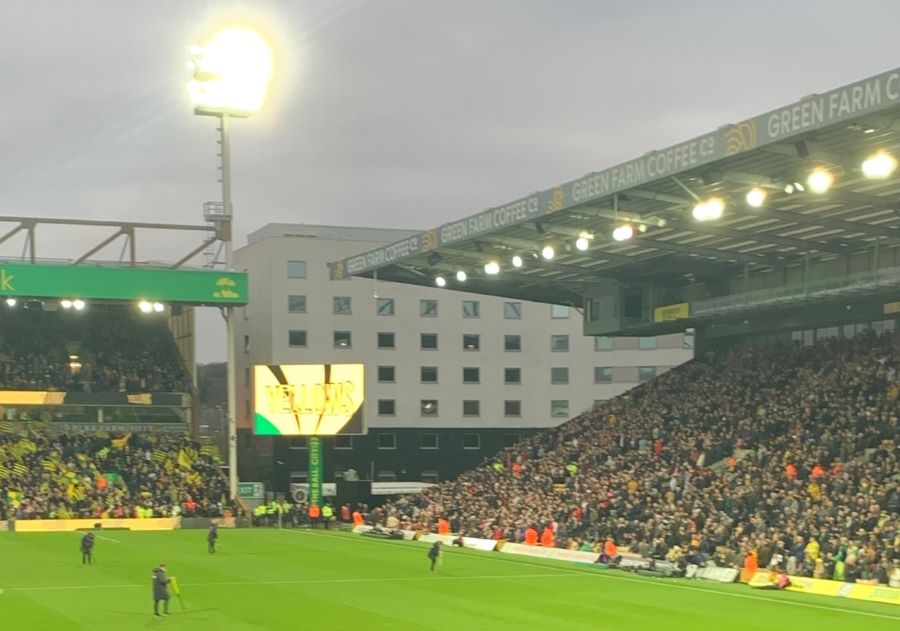 I’ve got some good news for you MFW folks – as if you didn’t know already – that we have finally found a manager with a plan B who isn’t afraid to implement it.

I’m making no bones about it, we were as battered as a loin of Lowestoft cod on Saturday during the first 45 minutes by a Southampton side who were pinging around crossfield and diagonal balls for fun, often ending up at the feet of the dangerous Kyle Walker-Peters who seemed to have so much space in front of him at times it was ridiculous.

Max Aarons got a lot of stick on social media for a so-called poor performance but the red and white overload on him down our right was exploited to the full by the Saints and Milot Rashica did very little in terms of helping him out. More on our Kosovan international later.

The Keystone Cops, aka our defence, allowed Che Adams to slot home after three and a bit minutes. It was like watching Tommy having a bad session on a pinball machine and I don’t know Who would contradict me on that point.

Those from Hampshire chanted “sacked in the morning” at Dean Smith. How they would live to regret that – their message boards yesterday were full of wishes calling for the dismissal of Ralph Hasenhuttl.

Then of course Rashica and Aarons combined to let the latter cross for a stooping Teemu Pukki header at the near post that Southampton keeper Alex McCarthy failed to react to and we were back in it. If I were [Saints’ second keeper] Fraser Forster, I would be expecting to warm my gloves up in time for next weekend.

The Barclay response was typical as in: “you’ve only got one song”, which I think applied to “Oh when the Saints” rather than their verbal attack on Dean Smith.

For the rest of the first 45, we were simply outclassed by a side who knocked it about freely and seemingly at will. About three minutes before the break Adams fired goalwards to Tim Krul’s right. The Dutchman got a big paw on the shot to push it behind and he must have seen it very late indeed as he was clearly unsighted. I sit behind the Barclay goal and realised what a crucial save that was.

That was the first of two turning points in the match.

The second would have been Dean Smith’s halftime team talk. Quite what was said during the break we will never know but the outcome was as impressive as the first time you encounter the Rolling Stones: grit, rawness and a joy to watch.

An understandably rusty and ineffective Todd Cantwell was hooked for Josh Sargent as we switched to what was virtually a 4-3-3 and went on the front foot. With Billy Gilmour playing further forward we started to show a bit of spark and it was the lads from the South Coast who were under the cosh.

The reward came 10 minutes from time when Grant Hanley atoned for some previous errors by heading home a Gilmour corner to send us all ape$hit. Poor old McCarthy stuffed up again as Hanley’s downward header skipped off the turf and through him. Fraser Forster, make sure you’re ready – it was another poor keeper error. But who really cares about that? I don’t.

Being Norwich, we almost chucked it away at the end when a professional foul by Mathias Normann led to a free-kick which was perfectly flighted for the head of Theo Walcott. But Walcott being what Walcott has become it flashed wide.

The Barclay and Snakepit resounded with *Rashica, Rashica, Rashica* in acknowledgment of the Kosovan’s second-half performance after he had switched from right to left which was thoroughly deserved. Certainly the best performance I’ve ever seen from him anyway – maybe the chanting boys have found a new idol.

My unsung hero was actually Sargent. No blood, no tears but sweat in bucketloads. He really knows how to work for the team and made such a difference when he came on.

As for referee Martin Atkinson I admired his ability to let the game flow but there were definitely a couple of incidents when I would have preferred it if he hadn’t. I’m pretty sure Saints fans would say the same.

No oles at the end from Dean Smith, just a round of applause for all of us.

Don’t you just love it when a plan B comes together?

I’ll leave you with this obscurity from Pink Floyd – any MFW reader who’s heard it before deserves our usual prize of a stale bacon roll.