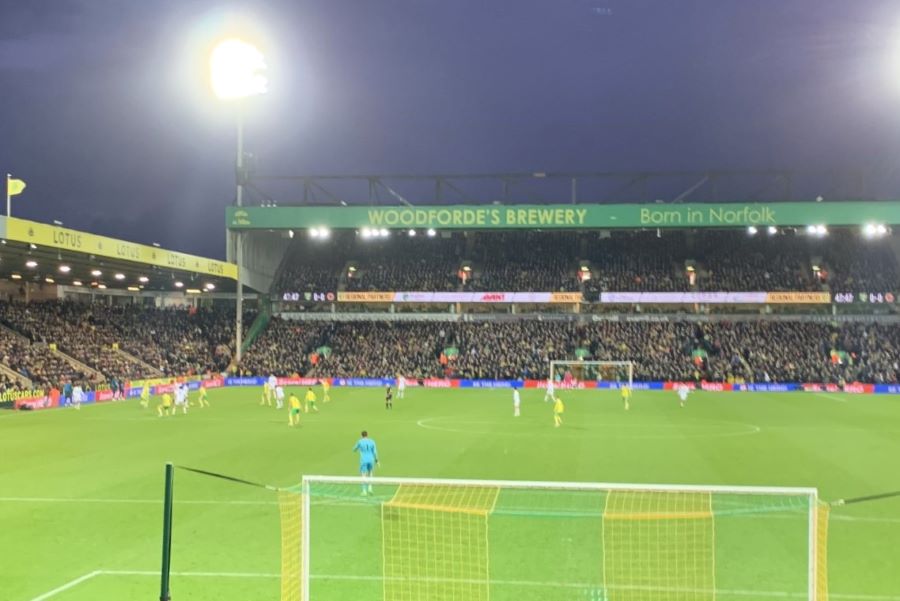 It was my birthday on Saturday. I am proud to say that I share the date of November 27 with Jimi Hendrix, although that is about all we have in common as he was one of the most innovative and exciting guitarists of all time, whereas me?

Well at least all you MFW types know who I am, which will have to be more than good enough for me.

I got the usual raft of presents, as in none whatsoever. After all, it was my 64th and although I got the usual mildly offensive and ageist cards from the kids it was up to me to provide myself with an actual gift, which turned out to be a pair of Poundland gloves.

I rarely wear gloves as I tend to lose them [the old girl had to put mine on an elastic loop when I was at primary school] but it was so cold on my way to the Carra that I thought it was a sound purchase. The skies tipped it down on and off and Norfolk’s welders are surely fully booked between now and Christmas by members of the brass monkey fraternity.

But 0-0 or not, the entertaining nature of the game proffered a kind of extra reward for birthday fortitude as I thoroughly enjoyed the Wolves match in the usual good company I meet up with in the Barclay on a matchday.

We were structured, offered a threat and more than held our own against a Wolves side who must be pretty decent as they’re hovering around a Europa League spot – I’d previously seen very little of them under Bruno Lage.

The loss of Mathias Normann early on through what seems to be a recurring pelvic muscle problem was completely mitigated by a fine performance from the often-maligned Lukas Rupp, who certainly had a very good hour when he came on as an early replacement. Except for shooting weakly at keeper Jose Sa when he could have done better, but I’ll forgive him for that simply because he “got stuck in” as Dad would have said.

Yes, we missed our chances and there was an “along come Norwich” moment between Grant Hanley and Tim Krul which would have been punished by Joao Moutinho on a different day. But the positives were there for all to see, not least the burgeoning partnership between Milot Rashica and Brandon Williams on the left, the tireless running of Josh Sargent and another solid performance from Ben Gibson.

Krul’s cajoling and encouragement of his defenders for the few Wolves set pieces was a joy to watch – and to listen to when the Barclay choir fell silent, which they rarely did. He’s quite vocal and very tactile, is our Tim.

When Wolves made an unenforced 92nd-minute substitution, it confirmed just how grateful Lage was for the point they just about merited.

Dean Smith was spot on when he said afterwards: “I thought the performance was better than against Southampton. We were probably fortunate to gain an extra two points last week and were unfortunate that we probably lost a couple of points this week”.

As always I had a few messages waiting for me from friends when I got home and I’ll pick one out from MFW regular Bernie Owen who succinctly said: ‘Marty, this [Simon] Hooper’s got no better as a ref over the years!‘

I’m forced to agree. Hooper made two terrible decisions within a minute. Both Barclay and Snakepit signalled their displeasure with *Hooper, Hooper you’re a c***, *you don’t know what you’re doing* and of course the referee’s song as well. Every time Hooper is allocated we know what’s likely to happen. This time it didn’t of course but our collective dislike of this particular official remains.

So all in all it was an enjoyable birthday and a performance that surely gives us all some hope of survival. On a sliding scale depending on our individual psyche of course. For me, I feel more optimistic than I did at Halloween.

There were to be two final twists in my birthday tale. Joining most of the rest of us with a big old ovation for Dean Smith and the players on the final whistle I stayed on for a short while. The couple who sit next to me had left a shopping bag under their seat and, of course, my bad weather Mammut boots got entangled in the handles and I had to slow the progress of those exiting from D Block row L as I extricated myself from said mantrap.

I set off to hand the bag into Richard the Steward on the exit gate when the male half of the couple struggled up the stairs against the heaving tide of exiteers to claim his wife’s bag. He was so relieved that I asked him what was on it – I hadn’t been bothered to look.

He said it contained his lightweight rain jacket and quite possibly the remnants of a packet of wine gums as well. Given the weather conditions, I’m not surprised about his joy at the reunion. Maybe Kendal mint cake might have been more appropriate than wine gums.

As the rain poured down and the wind howled like a pack of angry wolves** I emerged onto Prince of Wales to find total gridlock, not a taxi in sight so had to walk three miles home in the inclement weather. But it was worth it to see a good performance from the Canaries in a very entertaining game.

**The Wolvers fans themselves were not angry either before or after the game, so I’m not alluding to them.

Given the traffic chaos on Saturday I can think of nothing more suitable than this from my fellow birthday man, the maestro that was Jimi: