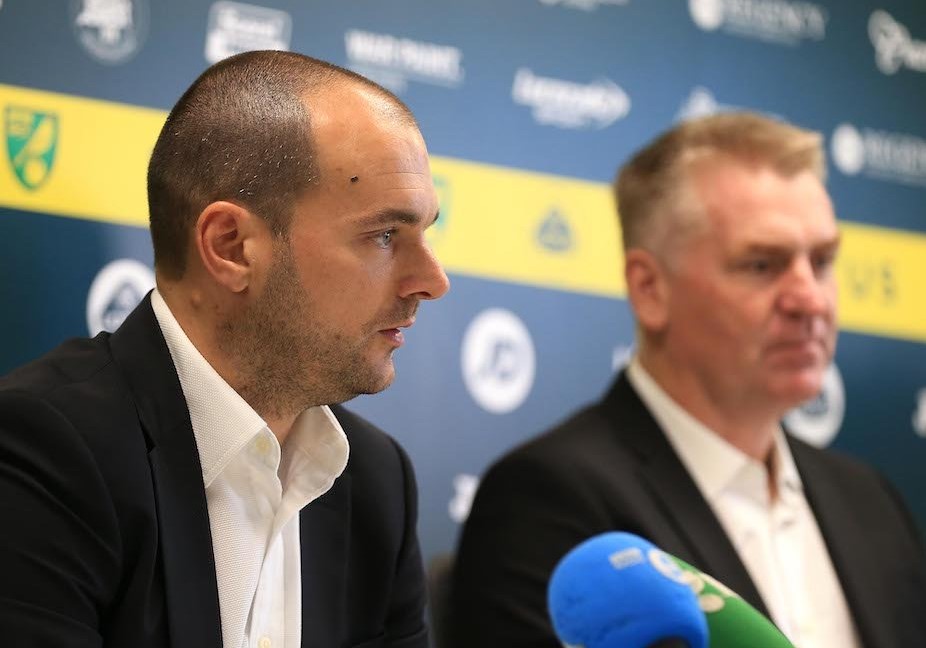 New manager bounce. Now that’s a short, sharp phrase to get the old grey matter working. Tottenham Hotspur have enjoyed the effect with the arrival of Antonio Conte as have ourselves with the introduction of Dean Smith and Craig Shakespeare, who are very much a team from what we’ve seen so far.

But the Tottenham Hotspur Stadium was the venue that showed us how this bounce factor only has a certain shelf life.

Did any of us expect a result in London N17? I certainly didn’t and was sadly proved right in an all too predictable fashion.

The stats say that we were well in the game, and in terms of possession, we actually bossed it in some kind of ironic fashion.

But here lies the rub.

Readers of a nervous disposition turn away now but for the remaining rufty-tufties who are still following I will for the only time in my life quote the late Max Bygraves, whose entrée to a poor joke was always *I wanna tell you a story*. So do I, and here’s mine.

Just over two years ago I was compelled, through previous and long-standing neglect of my oral health, to undergo [deliberate choice of phrase] a full dental extraction at the NNUH. Painful? Only when I woke up from the general anaesthetic and for a week or so afterwards. Covid-19 hit and the only option I had was to get a quick, cheap and cheerful set of NHS dentures courtesy of the admirable Mr Peirson in NR3 who has been Mrs P’s dentist for years. My own dentist in NR11 would only do it privately at an astronomical cost accompanied by a three-month wait for an initial appointment.

Said gnashers were ill-fitting and I cannot get on with them, so I only use them when I get a call to model the latest range of Adidas or Nike baseball caps. Okay, I don’t use the dentures at all, but being a bit of a chef I get by on the old nutrients front and it was quite a self-education to discover a great variety of things I can enjoy eating without resorting to a blender.

But even I have more bite than we showed at Spurs on Sunday. The comparative tale of my teeth and our assembly of strikers to get us through a PL campaign has a point to it – we just cannot cut it in the final third any more than I can eat steak and chips or a roast lamb dinner.

Teemu Pukki is who he is. He scored something approaching a worldy at Newcastle last week but this time around shot tamely at Hugo Lloris in only the third minute when he had to do better. We cannot afford a Harry Kane, a Mo Salah or a Gabriel Jesus so he is the best we have, and let’s be totally realistic – he has given us incredible value for money.

Forgiven for failing to convert the chance? Sure.

Adam Idah is still only 20. His close-range chance seemed nailed on but a complete mishit and possibly an air of panic saw another opportunity bite the dust. More of Adam in a while.

Josh Sargent is another young [misfiring] gun. When he entered the fray he had the last of our chances but it seemed the ball fell slightly behind him and, okay that’s never easy for a player to cope with but a lack of awareness rears its ugly head again. Right now he does not look like a well-spent £8 million and that is for sure.

We just don’t have a back-up to Teemu and from what I can gather there is nobody coming through the Under-23s either who might be able to step up at this level. The rumours of Jordan Hugill rejoining us from his loan to the Baggies next month do nothing for me at all.

Getting everything into perspective, we cannot expect the arrival of a new striker in January. It ain’t gonna happen so Dean Smith has to make do with what he’s got, which is simply not good enough for the task in hand.

Smith might well argue that the loss of Mathias Normann and Milot Rashica is exacerbating our recent woes and he could well be right.

Add in what seems like the consistent absence of Todd Cantwell for a variety of ever-differing reasons, the lack of game time for Christos Tzolis and the ever-growing feeling amongst the Canary nation that Stuart Webber has made a dog’s breakfast of our future profit-projected summer signings doesn’t do a great deal to elevate the collective mood.

Returning to Idah, certain sources claim that he will be sent out on loan in January with Forest the front runners for his signature. Already several Forest fans are complaining and saying they don’t want him as he won’t be an improvement on what they’ve already got, which to me means Lewis Grabban.

I get the feeling *new manager bounce* is starting to wear off a little more rapidly than I’d have hoped.

After all it’s only Captain Smug and the Red cohorts up next. I’d love nothing more than to turn them over but unless we sort it out in the final third that seems extremely unlikely.

I’ll certainly wear a toothless grin for a long while afterwards if we do.

A rarity from the SAHB to leave you good MFW folks with: Sharks Teeth. And oh man do we need some of those from somewhere.

Who was in the away end for this one?

Huddersfield looking for an experienced Champ. manager to take them to the end of the season.
Dean Smith?
Chris Hughton?
Paul Lambert?
#NCFC #Rejects