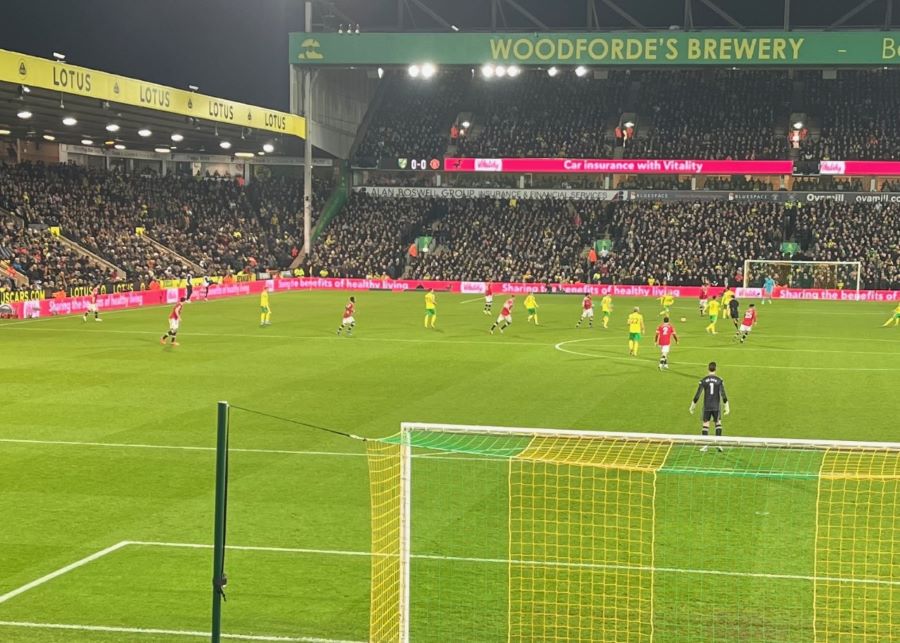 I’ve mentioned plenty of times that the key element of my post-match ritual is a phone call with my dad to dissect what did or didn’t happen at Carrow Road or beyond. He no longer attends games due to his health but the Norwich City fire in his soul still burns and his two penneth is always worth listening to.

He’s a notoriously hard man to please as many a City player has discovered over the years and he’s not big on hyperbole, so when he describes a performance as “magnificent” I tend to listen.

Even through his partial vision, he can recognise a really good performance when he sees one and last night he considered it just that.

“I sat here, all on my own, shouting at the tele and bursting with pride, Boy … we’re not out of this yet”

The kick-back of course was that, despite that really good performance, we still lost and we still failed to score but this was no Tottenham repeat where we created some good chances but failed to take them. On this occasion, we came up against a keeper in inspired form.

For Sky Sports to have awarded David de Gea the man of the match trophy speaks volumes, although I guess it was one way of giving an award to our visitors on a night when, if you were a neutral, you’d have been hard pushed to recognise that United even had opponents.

It was, of course, the Cristiano Ronaldo show – just how they wanted it.

It mattered not that the chosen one was on the periphery of the game all night and had what is colloquially known in these parts as a “stinker”. The penalty was enough to make him the story. Just how Sky wanted it.

I suppose for those who have not seen him in the flesh before there is a certain thrill to seeing an undoubted superstar of the modern game grace the Carrow Road turf, but for an old curmudgeon like me, it was nauseating – starting with the undignified pitchside charge of the thousands, all armed with their smartphones, as Ronaldo came out to warm up.

The visit of United, for so many obvious reasons, is invariably the most irritating of the season whenever we’re in the top flight, but the presence of dear Cristiano and the bandwagon that accompanies him made it doubly infuriating last night.

But what I didn’t expect was referee Darren England to be equally star-struck. Back in the good old days, referees were called impartial and resisted forelock-tugging when in the presence of perceived greatness. Not so Mr England.

All that was missing was him whipping his smartphone out of his back pocket during a lull in play and asking Ronaldo if they could share a selfie.

Luckily for said whistleblower, it wasn’t a particularly taxing evening as, aside from his two assistants and fourth official, he also had the help of Marcus Rashford, Harry Maguire, Bruno Fernandes and, of course, his man-crush – each and every one of them more than willing to help him out with any 50/50 decisions that came along.

I partly jest (obviously) and I’m pretty sure there’ll be someone telling me that once the dust had settled and the big decisions were analysed, he got most of them right but his general demeanour and unwillingness to flash yellow in the direction of red regardless of the level of misdemeanour really irked during the 95 minutes.

And while I accept that by the letter of the law, Max did have a small piece of Ronaldo as that cross came in, I’m not convinced he’d have pointed to the spot with quite the same haste had it have occurred at the other end.

While there wasn’t enough there for it to be overturned by VAR in terms of England making a clear and obvious error, would there have been enough to overturn it if it hadn’t been given?

You know what I’m saying.

And one final thing on the officialdom… why was there so little fuss and not even a hint of a VAR check when Billy Gilmour’s shot struck the arm of Diogo Dalot?

Again… if it had been, say, the Chosen One shooting and the arm belonging to, say, Jacob Sorensen…

I think we know, especially when considered in conjunction with the other penalty decisions awarded in favour of the big six yesterday.

But none of this must detract from what was a really good effort from a squad that has been stretched to the absolute limit. From four fit and healthy centre-backs down to one in the space of 24 hours is quite something even by Norwich City standards but what it did do was offer an opportunity to a lad who can count himself very unlucky to have had so little game time.

There’s no other way of describing Lungi Sorensen’s performance. It was indeed magnificent, as well as being calm, composed and classy. And Ozan Kabak too…. absolutely outstanding against a forward line so decorated and expensive it should rip your average defence to pieces.

But they didn’t. They stood firm. So too Tim Krul.

That it all went wrong because of one faint tug of a shirt was crushing for all of them, but for them to have gone toe-to-toe with such esteemed (but classless) opposition should give the collective confidence a major boost.

Mentions too to Przemysław Płacheta and Lukas Rupp, both of whom came in from the cold to play their part in what was a sterling effort for all 14 players involved.

I’m tempted to say a performance like that against Villa on Tuesday night would be good enough to win the game but we all know that football doesn’t work like that. We start from scratch but at least we know we can now compete and even if we don’t make it, a season that looked like petering out before the leaves had fallen from the trees is still alive and kicking.

For all of their preening, posing and posturing, United got away with one last night. Just don’t expect them to admit it.