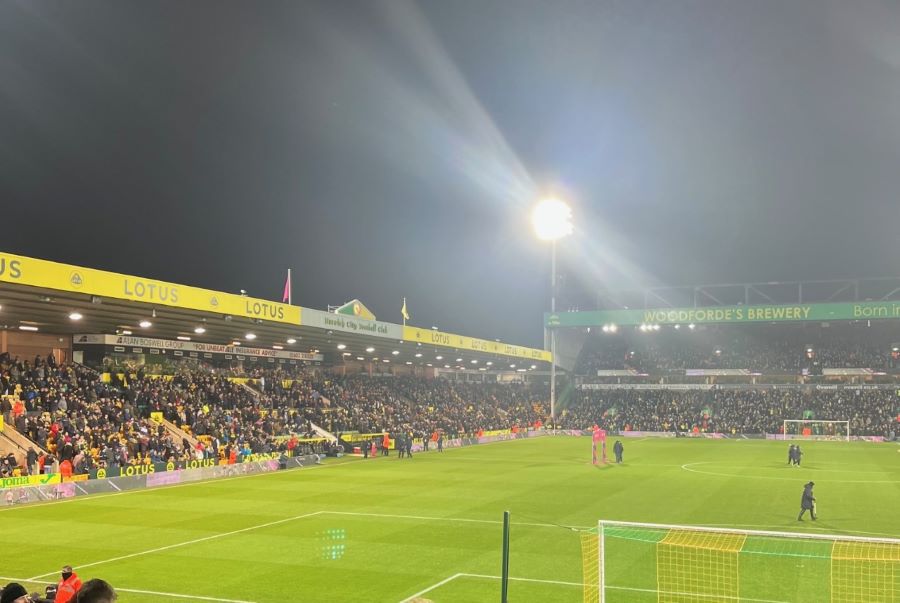 Trepidation.  That was the overriding emotion of a day where for once, I wasn’t counting the minutes until kick-off. Quite the opposite in fact.  The news from the Friday press conference was hardly encouraging, with cagey references to an indeterminate number of players awaiting PR results. Man Utd, rejuvenated under a new manager. It had a stench of Along Came Norwich and a scoreline to beat the England cricket team’s overnight effort.

The mood was not dispelled when the team sheet dropped.  Alongside the ineligible Williams, City lost Gibson, Omobamidele and Tzolis.  Smith switched back to a 4-3-3 formation with Placheta and Sargent making up the front three.

When the game kicked off, it was Sargent who occupied the wide left berth, with Placheta on the right.

City began crisply, confidently with some sharp tackles in the midfield from Rupp and Gilmour, never allowing the United players time to settle. The Canaries began to move forward with confidence, on six minutes working the ball from back to front only to find the way to goal blocked by a packed United defence.

The United players were perhaps not expecting such stoic resistance and began to misplace passes aplenty.  City, however, were unable to capitalize, that final ball continuing to elude them.  They had a clear game plan though, to use the width of the pitch against a narrow opposition, and it was proving effective.

On 12 minutes though, City conceded a soft free-kick right on the edge of the box.  The kick cannoned off the City wall forcing Krul into a sharp save to tip the ball over. Utd played the resulting corner to the near post where Aarons did well to win the header for another corner.  This one was punched well clear by Krul. United worked the ball from left to right where, to howls of derision from the Barclay, Ronaldo miss-hit the ball before tangling with Grant Hanley.

The first hint of trouble came when the Scot did not get up. Clearly in pain after falling heavily on his left shoulder, he played on for a few minutes before making way for the versatile Sorensen; the Premier League season seeming to take an all too familiar turn for City and their centre backs.

The change seemed to knock City out of their stride for a while, perhaps missing the vocal leadership from the back.  Yet despite this, Man Utd hardly stamped their authority on the game and as the half wore on, City began to grow back into it, McLean and Placheta combining to find Rupp in the box, but the German’s cut-back was just behind Pukki who couldn’t adjust himself on time.

As City pushed forward, Man Utd broke. On 36 minutes an excellent ball found Ronaldo in space on the City left.  Instead of unleashing a shot, he chose to cut back once, twice, three times before finally pulling the trigger, his shot well beaten away by Krul.

City struck back, a good ball found Rupp again, he couldn’t shoot but played it to Mclean, then Pukki in the middle before the ball was played to Giannoulous on the left. His first cross was headed away, the second saw Rupp narrowly beaten to the ball in the air.

In the final moments of the half, Krul had to be sharp again. The ball was cleared from a corner before Fernandez played the ball into Maguire. His looping header saw Krul backpedalling to make another good tip over.

The second half continued to the same theme. City were looking solid and sharp in midfield, well organized and effective.  Sorensen, exuding calmness, was proving to be an asset at the back, playing effective balls out to find Pukki and move City down the pitch.  Only once, maybe twice, was he caught the wrong side of his attacker, and City always found cover when he did.  Kabak seemed to grow in stature alongside him, less rash than his early appearances, he was beaten by Rashford once, yet recovered to make a superb tackle before the linesman flagged for offside.

On 58, City had a period of sustained pressure, with four successive corners.  Each time, Sorensen was just beaten to the ball by Maguire.  As City played the ball back in, Sargent conspired to stand on the ball, before Mclean made amends.  The American is something of an enigma.  He has something of the Stieperman about him – ungainly, unconventional yet somehow effective.  That is until the ball falls to his feet in and around the penalty box, when he seems to swap his football boots for flippers.  A goal may do wonders for his confidence.

After 68 minutes, Todd Cantwell replaced Placheta, warm applause marking a creditable effort for the lightweight winger, rousing cheers greeting the Dereham Deco. Moments later, Lindelof seemed to be in some sort of trouble and was forced to leave the pitch.

Only a few minutes later came the deciding moment of the game.  A diagonal cross into the City box.  Aarons laid an arm upon Ronaldo and the Portuguese inevitably went to ground.  A soft, soft penalty, perhaps naïve from Aarons, but nonetheless frustrating.  On the touchline, Dean Smith was furious as the ball was lashed home from the spot.

Yet City didn’t buckle.  They moved forward with purpose, winning a free kick on the left – and a United player finally going in the referee’s book – Dalot with a tackle much tamer than many that had gone previously unpunished. Gilmour swung a vicious ball onto the head of Kabak and the young loanee was turning away to celebrate before De Gea somehow stretched to keep the ball out.

City came again. Lees-Melou, on for Rupp, had efforts blocked before Billy Gilmour had 2 great shots blocked. Cantwell then made his most telling contribution, great quick feet saw him pass 2 United defenders before being fouled on the edge of the box.  The free-kick to the far post once more found Kabak, only for De Gea to thwart him again.

And that was that. City did not deserve to be beaten by a bang average Man U side.  The performance was chalk and cheese from last week.  City moved the ball quickly and progressively out of defence. Where last week, the midfield yielded few options, this week Gilmour, Rupp and Mclean were always there to provide an outlet.  Giannoulis looked like a man playing for his place – always a danger going forward yet much more solid in defence.

And another shout out for Sorensen. He may get another run and centre back in the week. We need not worry.

Dean Smith has done well to pull this performance out of the bag.  Yet it felt a little like City just before the lockdown pause.  Playing well. No reward.

The trajectory, at least, seems upwards this week.