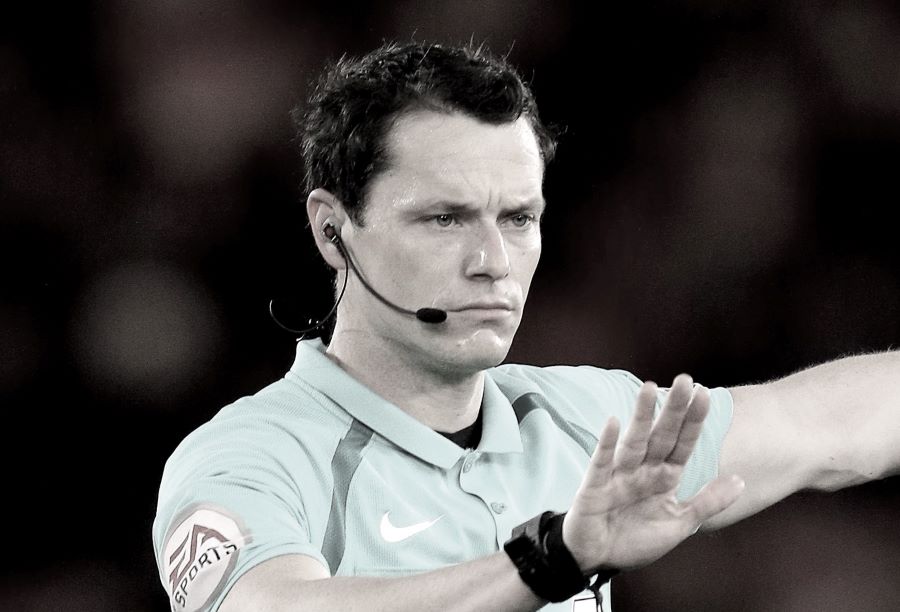 In my lifetime we’ve sung that chant for Chris Woods, Rob Green and even John Ruddy. Maybe even for Kevin Keelan too and if we didn’t we should have done.

But referee Darren England certainly wasn’t Number One on Saturday evening so there was no need for a reprisal of the old tribal chant.

It’s probably a bit petulant of me to openly criticise a match official, which I really don’t do very often, but on this occasion, I feel a little bit justified as his performance was as poor as that display from the multi-millionaires in their red shirts. It’s usually sound to back up an argument with the odd perception or two, so I’ll offer a brace on Mr England.

Firstly everybody wants to see a match official facilitate the flow of a game. I’ve always been up for that and always will be. But some of the niggling little digs coming from the Reds should have been clamped down on early doors. Not a single card from Mr England though until so late in the game that it made no difference.

Harry Maguire shirt tugging at every opportunity? No worries mate, you carry on. Marcus Rashford wants to award himself a free kick? Of course you can pal, off you go. Our ratio of free kicks awarded increased after Manchester United scored and I wonder why?

Secondly, Mr England was like a startled bunny in the floodlights. That’s cynical maybe but I hope I can be forgiven for suggesting that the big-time Charlies played on their perceived status at every available opportunity.

Enough of Mr England – there were many, many positives from this game with our depleted squad showing up very well against a side who will be struggling to make the top four this season, no bones about it.

Lungi, where have you been? Seventy minutes of composure alongside an equally unutilised Ozan Kabak at centre-back was a joy to watch. He’s no speed merchant but our Jacob fitted in seamlessly and really didn’t look out of place in any way whatsoever. He may be required for a while in which once more isn’t his favoured position after a really bad landing for Grant Hanley after a challenge from the Red Devil I’d instructed myself before writing not to mention by name. Speak of the devil and all that.

Steve who sits behind me in Barclay D Block is very much a rugby man and straight away said “dislocated shoulder”. I offered “maybe a collarbone” but he explained the difference and I quickly realised he was right.

Lukas Rupp had a good enough game for me to pick up a chant I’d never heard before. He hasn’t exactly got his own song yet but several chants of “Rupp, Rupp” broke out in the second half and a few “USA USAs” for Josh Sargent who worked so hard while mainly playing on the left, which I’ve certainly never seen before.

Pepe Placheta made what I believe was his Premier League debut and in the absence of Milot Rashica offered quite a lot going forward and gave us a bit of much-needed width. Alex B tells me it was his first start since Swansea last season, in which case I’m even more impressed. He should start against Villa for sure and it would help if Maguire would give him his shirt back. Times are tight, you know.

A little bit of luck and a lesser performance from David De Gea would have seen us win that one so while I’m as disappointed with the result as we all are plenty of hope remains beneath our current position in the league table.

Not normally one to praise myself in prose I deserve a bit of self-congratulation this time around. Well done me for not referring to the penalty, the naivety of Max Aarons and the cynical way it was drawn by the devil incarnate – he who shall not be named in this article.

I’ll cheerfully quote Dean Smith on the penalty incident though:

“It was a soft penalty. There have been plenty of challenges similar to that during the game that weren’t given, so I’m annoyed because I thought there was a lack of consistency from the officials today. [Marcus] Rashford gave himself a free-kick in the first-half.”

Oh well, I always let myself down and breach my own guidelines. I seriously dislike the ego of Cristiano Ronaldo – whoops!

This is dedicated to the match official. I know it’s a Springsteen song but being a bit of a prog fan in my youth I much prefer this version: