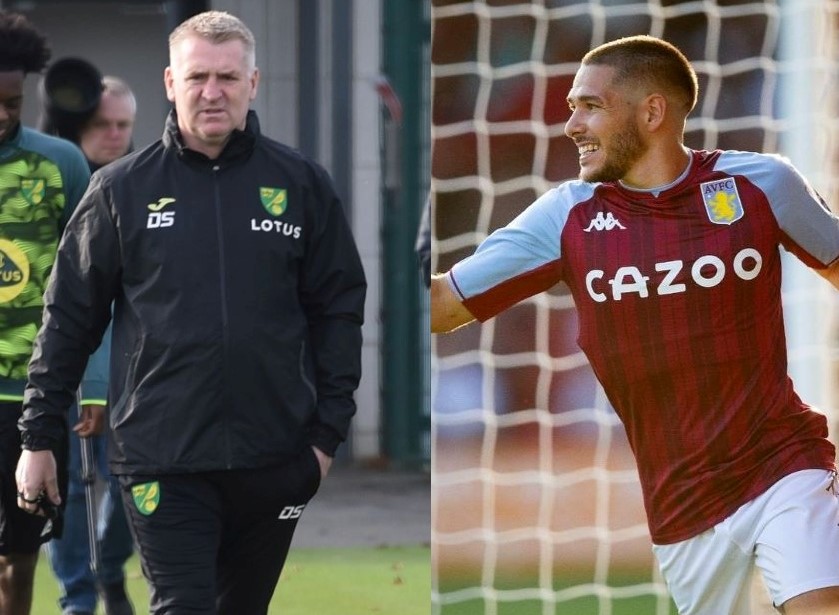 And so we move on swiftly to the visit of Steven Gerrard’s Aston Villa™, an evening loaded with so many sub-plots it could have been written by David Lynch.

Dean Smith is, of course, not the kind of guy to hold any grudges, and Villa is his club, but he’d not be human if this didn’t have an extra edge for him. His departure from Villa Park was largely free of acrimony – at least in public – but however it’s dressed up, he was sacked and it was brutal.

The final straw for Christian Purslow was a run of five consecutive defeats but most Villa fans, prior to being seduced by the appointment of the next Liverpool manager, were of the opinion that he was a little hard done by.

They, it seems, felt that same pang of regret that we all felt when Daniel Farke was shown the door, and there’ll be no hostility from the visiting fans. In fact, not since the visiting Villa hoards courted the then City manager Paul Lambert in May 2012, will there have been so much love drifting across from hotel corner to dugout.

But none of the above should hide the fact that Smith and Craig Shakespeare will badly want to win this, if only to just remind Mr. Purslow that he was a tad premature in pulling the trigger. It’s no revenge mission – as he stated at today’s presser – but I suspect human nature will kick in around 7:45.

While Steven Gerrard will have tinkered with the set-ups deployed by S&S at Villa, both will be acutely aware of the strengths and weaknesses within that squad and will be naturally looking to use that knowledge when assimilating the game plan.

For what it’s worth, this is how Villa lined up at Anfield on Saturday:

One name absent from that starting XI is Emi Buendia – once of this parish. He’ll not be missing tomorrow night though. Gerrard confirmed as much in today’s presser.

When Emi left it was one of those that really stung, even though it’s subsequently been revealed he’d made it crystal clear he no longer wanted to be here. But back in August, the thought of seeing him pictured in that claret and blue shirt for the first time was a horrible prospect and didn’t disappoint when it happened.

He was, without doubt, one of the best players ever to wear the yellow and green – the beating heart of the glorious Farke era – and so left a massive chasm to fill when he decided Norfolk was no longer for him.

In an era where stats are only a shade less important than goals, the bloke we knew as ‘5 feet 7 of football heaven’ (even though Wikipedia thinks he 5 feet 8) was head and shoulders above the rest when it came to assists and big-chances-created, as well as chipping in with more than his fair share of goals. He also excelled without the ball and made more tackles than anyone else as well as drawing the most fouls.

That Dean Smith wasn’t able to get a particularly melodic tune out of him over the first three-and-a-bit months of this season, was a bit of a surprise although, in reality, him being seen as heir to the throne once belonging to Jack Grealish was always going to end in disappointment.

The general consensus seems to be that Smith didn’t get the best out of him by using him as a 10 rather than as an attacker who could float and drift in from the right.

Either way, despite a few flashes of the Buendia that we recognise, he’s yet to set Villa Park (and the Premier League) alight in the way we anticipated, although I’m conscious I’m tempting fate by even mentioning it.

Interestingly, Dean Smith did comment on Emi’s short fuse and how it had revealed itself in training, and so, for all the love he may feel from the City faithful prior to kick-off (only a brief ripple of applause from me), we shouldn’t rule out the odd bit of subtle provocation if the opportunity presents itself. All part of the game you understand – just business.

In terms of City team news, Ben Gibson looks likely to be available while Andrew Omobamidele again misses out, so unless Smith decides Jacob Sorensen’s outstanding pocketing of Ronaldo was deserving of another outing, it could well be a Gibson/Ozan Kabak combo at centre-back.

There’s also a choice to be made at left-back where Dimitris Giannoulis was another to excel against Manchester United while Brandon Williams missed out due to the Red Devils being his parent club. It’s very much an either/or type decision with both bringing different qualities to the party but it would seem harsh to leave the Greek international out after performing so well on Saturday.

Unfortunately, Mathias Normann’s pelvic problem persists, so we can expect to see the Gilmour/Rupp/McLean midfield trio being given another outing, although Sorensen has to also be in that equation if he misses out at centre-back.

Teemu Pukki is the biggest shoo-in in history to lead the City line and while Josh Sargent and Przemysław Płacheta both staked valid claims for a start against Villa, Todd Cantwell’s ability to create and chip in with the odd goal must surely put him in the frame for a start.

Also missing from the centre of their midfield will be Marvelous Nakamba, who has a knee problem, but the aforementioned Argentinian, who according to Gerrad has been nursing a couple of knocks over the last few weeks, looks certain to feature:

“The idea was always to have him fresh and ready for this game”.

And there we have it. A game that has clearly been on the Villa radar for a few weeks, no doubt as it’s one they have identified as an easy three points.

The sense of entitlement that accompanied the visiting supporters on Saturday night won’t be matched by those who arrive from the second city tomorrow night, but they too have had their moments, not least when we questioned at the time whether Villa was a big enough stage for Buendia.

We were put firmly in our place in no uncertain terms (Quote: “You can’t compete, we have BILLIONAIRE owners”) while being reminded of our lowly place in the English footballing food chain.

So, while Dean Smith and Shakey clearly have no desire to turn tomorrow night into a grudge match, from a fans’ perspective it’s useful to note how we’re perceived by others and to then use their air of superiority as fuel for the Carrow Road fire.

The players did a fine job against United and were desperately unlucky, but the Y’Army too was in good form and made the type of noise and created the type of hostile environment the new gaffer has demanded.

More of the same from all concerned tomorrow night and maybe, just maybe, the Carrow Road fire will be lit and we can all go home happy.

How brilliant would that be.