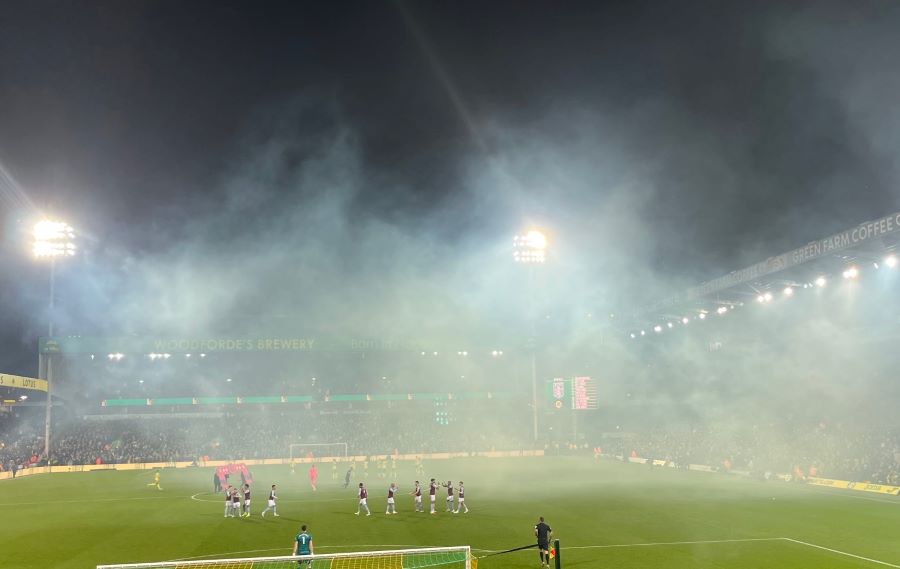 If Saturday’s performance against Manchester United offered hope that survival is not beyond us, last night’s tame offering against Villa was a salutary reminder of how and why we are rooted at the foot of the Premier League. And why survival probably is beyond us.

There is of course mitigation in the form of a squad ravaged by injury and illness, but nothing can nor should excuse the paucity of performance in last night’s first half. That chosen XI was capable of more than they delivered.

Everything we so loved about Saturday’s stirring effort – the fight, the fire, the tempo, the intent, the precision etc – was missing and Villa were allowed, at their leisure, to do to us what Southampton did during Dean Smith’s opening 45 in the City dugout.

It was a painful watch made all the more painful by us convincing ourselves beforehand that it was a game we could win. As it transpired, Villa were too fast, too strong, too sharp, too skilful, too organised and won it without even having to shift through the gears.

For Tyrone Mings, who we desperately wanted to watch flounder in a Harry Maguire style, it was instead a cigar and carpet slippers type evening. Emiliano Martinez, in Villa’s goal, will not have an easier 90 minutes all season.

It’s hard to be too critical for the reasons stated and, by the sounds of it, there are players in the squad who have tested Covid negative but are still feeling unwell, who are having to soldier on. That could explain the general lack of energy and zip in that first half but still it was a tough watch.

Whatever the reason(s), it was one of those games in which we specialise when playing in the Premier League – one completely devoid of joy. The only positives came prior to the first blast of David Coote’s whistle in the form of some impressive pyrotechnics.

Sadly, the lingering smoke that, for a few minutes, shrouded the pitch eventually dissipated.

In fairness to Dean Smith, he wasn’t about to use the fact his squad is down to its bare bones as an excuse for that first half and knew, as we all did, that his starting XI was capable of producing more than it did in that opening 45. “Passive without the ball and slow on the ball”, was his succinct summing up of what unfolded.

That we went in at the interval only 1-0 was quite the bonus but despite a second-half improvement, this never really looked like being a Southampton mark II. And, to be fair, with Sam Byram playing in the centre of midfield having not kicked a ball for nearly two years, we couldn’t really have expected it to be.

But it was better. There was more bite and purpose. Mings even had to stub his cigar out.

Indeed, if Kenny McLean had gobbled up one of those chances that would be taken by every one of our opponents but are routinely fluffed by City, then it could have been a different story. But he didn’t and it wasn’t. And that would have been harsh on Villa who were in total control.

Interestingly, Smith observed that City were the fitter of the two sides as the game entered its final stages but while that should be advantageous, it really isn’t when you’re as devoid of quality in the final third as City are right now. Even when we had decent spells and got in semi-dangerous positions, it was powderpuff stuff.

The inevitability of Villa’s second goal on the break was obvious to all and didn’t disappoint but even at 1-0, our visitors were sadly more than comfortable.

For Dean Smith’s part, there’s only a very limited amount of room to manoeuvre right now, but if it was a tactical decision to replace Dimitris Giannoulis with Brandon Williams, it was one that backfired.

The Manchester United loanee had a poor evening, with and without the ball, and it was one of those where his natural inclination to check back rather than go on the outside stood out like a sore thumb, with several promising attacking positions being squandered because of an unwillingness to use his left foot.

If part of the reason for his inclusion was for him to use his inherent tenacity to leave one on a certain volatile little Argentinian, it didn’t happen. In fact, no one did, which was disappointing.

But that was only one aspect of a night that disappointed on many fronts, and not all of them within City’s control.

I’d welcome an explanation from the Premier League as to why it was okay for City to play with at least four Covid related absentees while Manchester United – and Tottenham before them – were permitted to postpone a game for that very same reason. Anyone would think it’s one rule for the Big Six and another for the other 14.

Smith remains, publicly at least, convinced that this squad had enough within it to clamber out of the mire, but with every passing defeat that possibility becomes that little bit more remote.

We were always going to need some good fortune and a fair wind behind us to give it a real go, and right now it’s deserted us and we’re going headlong into a gale.

Lucky breaks and sympathetic decision-making are, it seems, for others.