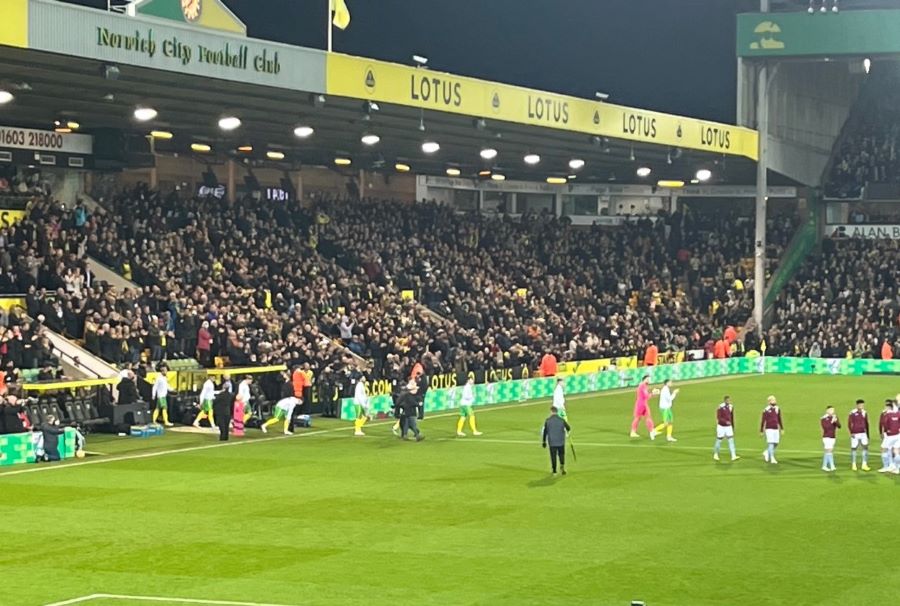 Now for the rest of the game.

As performances go, it is easy to exhaust the list of superlatives to describe how awful the first half.  Shapeless, listless, languid.  I could go on.  From the kickoff, Villa looked like a side who meant business, sharp to the ball, quick, crisp tackles.  Everything City weren’t.

After 10 minutes, the City faithful even got bored of booing Tyrone Mings – or it may have been that the ball never got as far as him.

Villa were pushing everything down the City left.  Poor Brandon Williams, shorn of any cover in front of him, had a torrid time against Cash who, as early as 30s, played the first of a seemingly never-ending stream of dangerous balls into the City box.

In defence of Dean Smith, the team news saw him shorn of Rupp, Lees-Melou and Sargent, presumably Covid related, and the City midfield had the twin rarities of Cantwell and Sorensen, both starting in their preferred positions.  Sorensen took a little time to settle in but looked composed, made some excellent interceptions and tackles however, along with the rest of the home team, too slow and too square in possession.

And Cantwell. What can be said. So talented, yet for much of the first half he looked utterly lost, unable to exert any influence on the game either going forward or back. With neither the outlet to go forward, or the cover going backwards, City’s left was wide, wide open.

The middle was little better. McLean was, as ever, a willing runner but can only cover so much of the pitch.  Gilmour was back to the square and backward passes we saw against Spurs. At the back, Kabak at times looked great, but in possession he was unusually hesitant – perhaps a lack of players showing for the ball.  Other than Sorensen, only Placheta could be singled out amongst the City outfield players.

With so much dominance, it was a wonder that Villa only managed a solitary goal – thanks in no small part to the agility of Krul.

When it did come, it was from one of the few occasions that City moved out of defence with pace and purpose. Aarons started it running the ball out of the back line before giving it to Gilmour. Inexplicably, instead of opening his body and moving infield, he ran wide into a congested area and immediately lost the ball, which broke to Watkins.

Kabak charged at him and cleaned him out, well after the ball leaving Ramsey with a run on goal.  Despite the attention of Gibson and Aarons he unleashed a shot past Krul in the City goal.

And then it got worse. Kabak got the ball at the back, hesitated to resounding boos from the Barclay, before playing the ball out of play and sinking to the turf.  He didn’t recover and we were treated to the sight of Sam Byram coming on into midfield, with Sorensen dropping back into defence.

The crowd were expecting a reaction in the second half. They got it, but only just.

City set out their stall straight away. A string of pulls, fouls and pushes disrupting the Villa rhythm. The tactic seemed to work and City began cautiously to build some possession. Most attacks seemed to result in corners being conceded and nearly every one was lofted into the box with little pace such that, when City won the headers the ball merely trickled to the keeper.

Placheta seemed to be relishing the physical battle with the much sturdier Targett, and had the beating of the Villa full-back on more than one occasion. The Pole was City’s best attacking outlet but still struggled to create serious danger.

Cantwell gave way to Idah and it was the young Irishman who mustered one of the few efforts that caused Martinez’ heart rate to raise above torpid.  Gilmour drilled a free-kick towards the edge of the box, but Idah’s powerful header was directed straight at the former Arsenal keeper.

City had a spell of sustained pressure, pinning Villa back into their half and nearly forced a chance. Ashley Young playing a blind back pass that Kenny Mclean latched onto but couldn’t find the touch to finish.

On 75, the tiring Placheta was replaced by Dowell and thus ended all serious attempts on the Villa goal. On 78 though, Pukki was finally given something other than scraps to feed on. TV replays showed he was clearly pushed over by Mings but Norwich just never get those ones awarded.

And it was inevitable. On 86 minutes Villa played a quick ball forward to the youngster Chukwuemaka who brushed Gilmour off with disdain before squaring the ball for Ramsey to tap home to make it 2-0.

If I am to be charitable, I will point out that this was a team put together from the nether regions of the squad, that may not have played too much football recently. But that does not excuse the dismal first half – this was as bad as we have seen this season.

In the second half City at least made a game of it but were still disjointed and toothless. Once again, all the good work at the weekend has been undone.

And there it is. I made it without mentioning Villa’s record signing. A player who was booed and applauded in equal measures both arriving and leaving the pitch.

How we needed his creation.