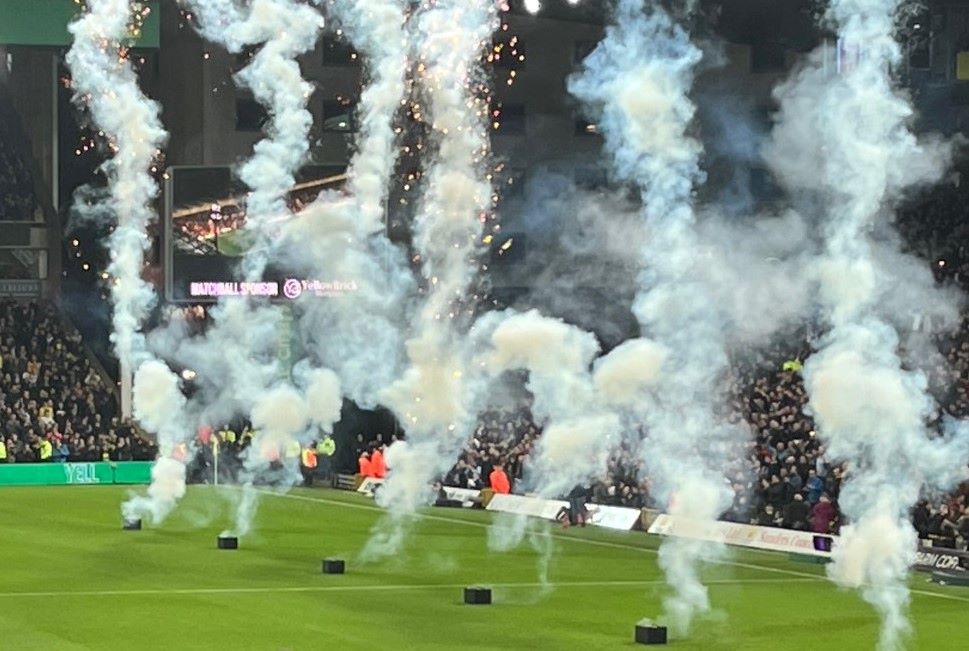 Night games. I rarely attend them these days due to escalating old age, logistics and in Tuesday’s case a certain apathy towards strolling along Prince of Wales Road around 10pm just ten days before Christmas.

In that spirit, I passed my ticket for Villa to MFW regular Don Harold, who kicks off this piece on my behalf.

“I met with friends in the Kings Arms. We were all optimistic following the performance against Man Utd. The mood dropped when the line-up came through at about an hour before kick-off.

“It was clear that Covid and injury had ravaged the squad and there was discussion as to how Man Utd and Spurs were able to postpone their games but we couldn’t, opaque EPL regulations and the same favouritism that gives big teams penalties that we’d never get were cited.

“The first half was as bad as it gets, right up there with the Watford game in its disjointed awfulness. At half time Martin’s friends on the row behind were congratulating him on choosing this game to miss. The second half was less terrible, but Martinez (one of the PL’s best keepers) could have brought his knitting with him such was the lack of threat Norwich provided. Other than the mistake that put Kenny McLean through, I can’t recall him being troubled at all.

“I have no idea what’s wrong with Todd Cantwell, but he shouldn’t be playing. I think a January move would be best for all concerned. Billy Gilmour doesn’t look anywhere near the player who was man of the match for Scotland against England and other nations and looked so good in his initial breakthrough games for Chelsea; he looks a long way from being a player who is going to play regularly for a top-six team.

“The saddest thing for me is the realisation that Adam Idah looks as though he’s not going to make it. He’s one of those players who has a bright future behind him.

“Villa won as comfortably as the score and stats suggest. God knows what we’ll be able to do against Wetsham and Arsenal.”

When Don dropped the ticket back yesterday morning his assessment hadn’t changed.

My friend and MFW regular Bernie Owen was even more pessimistic:

“Hi Marty. Well that’s it, we are down. I know it’s not mathematically proven but we are. New manager bounce gone. Would Farke’s Norwich have been as bad as tonight?

“Webber is all smoke and mirrors. We all appear to think he’s great – I don’t. His buys have been, at best, inadequate except Pukki and Buendia which means a success rate of 2/20.

“Ah it’s over. Norwich toothless as ever. Rant over.”

Circumstances conspired against us like they often seem to. Covid issues eliminated Christos Tzolis, Lukas Rupp, Pierre Lees-Melou and Josh Sargent while we were already missing Mathias Normann and Milot Rashica. Dimitris Giannoulis was on the bench but apparently unwell so in this case making up the numbers.

I suppose Ozan Kabak departing from cramp was the black icing on an unpalatable cake, mildly alleviated by the return of Sam Byram after an absence of nearly two years for a gig in central midfield as Jacob Sorensen dropped into the back four.

As I write Dean Smith is concerned about the lack of clarity from the Premier League to the point that he does not know when to pull the trigger on calling off a fixture because of Covid issues. I doubt any other manager outside the top six does either.

I’m afraid to say I can see another behind closed doors scenario emerging here. I know MFW readers’ views will differ on vaccinations but for the record I have had a brace of Astra Zenecas and a Moderna booster, so I have done all I possibly could to continue to be allowed to go to Carrow Road.

But will it be enough for the politicians? I don’t know, the situation changes so fast.

The only thing I am certain of is that I will not go to a game if I am expected to wear a mask in my seat in the Barclay. Is that a far-fetched fear? I’m not sure it is, to be honest.

Nobody takes relegation as a given before Christmas [well, maybe Bernie does] but as Gary said yesterday the omens are not good – we could yet end the calendar year rock bottom with 10 points. That’s the reality right now.

Does the January transfer window offer any hope? Probably not in this case even if we sell Max Aarons. Dean Smith will reach a point where he will have to plan for a large-scale rebuild targeted at next season in the Championship. There will be no Billy Gilmour, Normann, Kabak or Brandon Williams and I doubt the recalcitrant Cantwell will be here either. We won’t get much for him when we sell and those quotes of £30 million seem like a lifetime ago.

This is football as we Norfolkians know it, I’m afraid.

I’ll leave you with this offering from Skeggy’s finest, Graham Bonnet of short-lived Rainbow fame. Those of a metal persuasion will recognise a couple of very famous faces in the *backing band* and clips in the video will illustrate why I am no longer prepared to walk along Prince of Wales Road at 10pm. The visuals really could have been created in NR1, although I know they weren’t.

Enjoy – and set the volume to eleven: