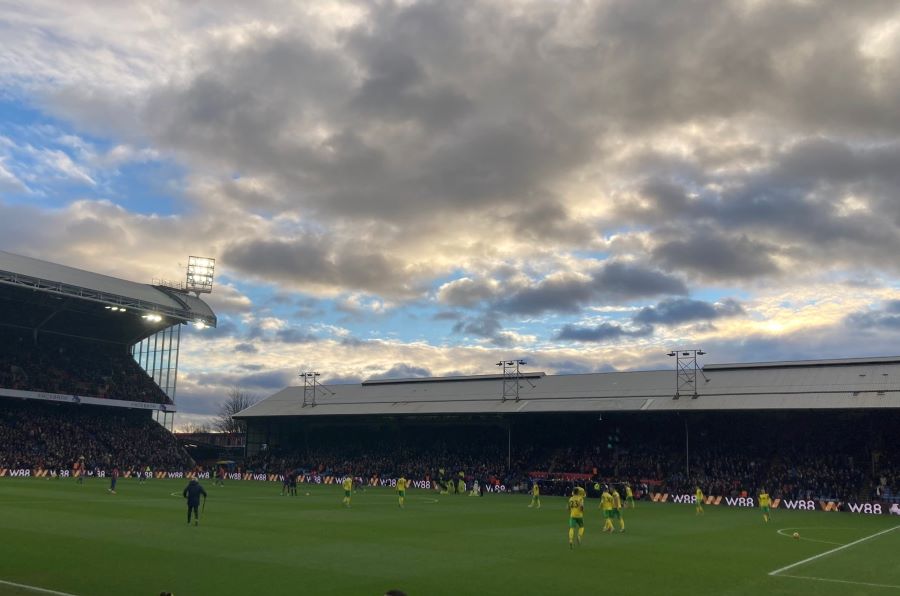 You have to feel for Dean Smith.

He knew he was signing up for what many deemed a mission impossible, but his own professional pride and some carefully chosen words by Stuart Webber were enough to convince him that there was enough quality in this squad for it to achieve 17th place or better.

There isn’t and we won’t.

He didn’t of course expect for said squad to be ravaged by illness and injury to the extent it has, and he certainly didn’t expect to be picking a team at Selhurst Park that was without all of its best players, included two goalkeepers on the bench and was still one short of a full complement.

As tends to be the case when you’re rock bottom, we’re in the full grip of Murphy’s Law. Anything that could possibly go wrong has gone wrong and when we think we’ve ticked the entire list of potential disasters, we then go and discover some new ones.

So I should really start by saluting the 2000+ loyal, hardy foot soldiers who made the trip to Selhurst Park. If only City’s players could display similar levels of commitment.

Because for all the injury and illness woes and however threadbare our squad is, there were points to be had at Palace yesterday. They too were minus some big names and, as a result, fielded a side that had an unfamiliar look to it. But this City team has forgotten how to win; even how to draw.

From the second that Kenny McLean made that ill-judged challenge and Will Hughes used his public school drama lessons to good effect, the die was cast.

From that moment onward, not a single player in yellow and green believed they could anything from that game. And the fans knew too… we’ve seen the film many times before. Just like watching Elf for the umpteenth time, knowing the ending but without the warm, fuzzy feeling.

After what had been a bright opening, the cock-ups began. Stray passes, missed tackles, lost 50/50s and that general befuddlement of the brain that occurs when things start to go awry.

That goal number two came just 22 seconds after Jacob Sorensen had missed a very presentable chance at the other end summed up the Class of 2021-22. Carelessness at both ends of the pitch and hot-knife-through-butter syndrome in the middle third. The perfect recipe for disaster.

Goal number three shortly after was inevitable I’m afraid, and that was Palace finished for the day. Job done.

City’s huffing and puffing of the second half simply had to be better than the first and it was, but that was all it was. A couple of half-decent chances came and went, as is our wont, but this was Palace in cruise control. Never troubled and never even the slightest hint of a stirring comeback.

Not saying things are grim, but in order to entertain themselves, the travelling Y’Army had to pretend to celebrate a goal. And while it’s gallows humour at its finest, one can only imagine the dispiriting effect it must have had on the players.

Talking of whom, the one whose display has attracted the most attention yesterday was one Billy Gilmour, who was on the receiving end of a song from some City fans who were suggesting, in industrial terms, that he be returned to his parent club.

Now it’s clear the young Scot hasn’t been the fledgling superstar we desperately wanted him to be, nor is he the international superstar that Chelsea fans already believe him to be, but some of the abuse he is taking from certain quarters at the moment leaves a distinctly bitter taste.

For all his current failings, and there are a few (too loose with his passing, too easy to bypass etc), he never hides. Yesterday, at 3-0 down Gilmour was still demanding the ball and trying to make things happen – even if it didn’t. Unlike others, not least his fellow Scot in the centre of that midfield who, despite being the senior pro of the two, seems to get a free pass.

In a team that badly lacks leaders and those with a voice, the least we should expect of the experienced internationals in the team is that they use that experience to help lead the younger players through these troubled waters. Not to concede a stupid penalty after six minutes and then hide for most of the second half.

But the problems Dean Smith faces are multi-dimensional. It’s a team that can’t defend, create or score and none of us should get too carried away by the fact that we’re still only three points adrift of 17th place. The fact we have played more games than anyone else, apart from Newcastle, and can’t score a goal for love nor money means our goose is well and truly cooked.

Maybe a fleeting sign of what’s to come in the second half of the season came in the form of young Jonathan Rowe’s late and lively cameo. We’re already in what-do-we-have-to-lose territory, so why not give some game time to those youngsters who may well be leading the Championship charge next season.

Whether the rest of us have the stomach to go through it all again when we know how dispiriting the prize is, is an altogether different question.

Leicester away next. Hey ho.