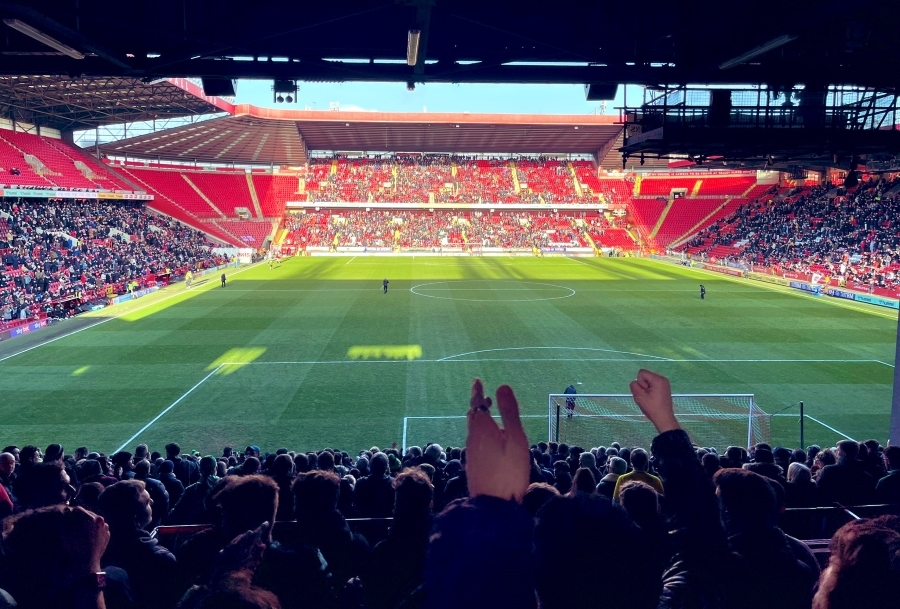 I didn’t go to Charlton on Sunday but was aware in the days leading up to the game that a Delia Out protest was planned by a small group of City fans. This was confirmed when a picture of said group with said banners appeared on Twitter.

I trust it’s not being ageist to say that lads and lasses involved were of the younger generation because they were.

It also became apparent as the afternoon unfolded, that a small group of fans, accompanied by a drummer (it may have been the same group), were singing songs of a similar theme, as well as songs colloquially described as ‘gallows humour’.

Typically, this was not well received by the majority.

Some have accused them of being the ‘Football Manager generation’, others of them being of the generation that wants everything now, while some have gone route one and told them to grow up.

But, while I don’t (anymore) have sufficient fire in the belly to take such a stance, part of me feels their pain and shares their frustration. I don’t necessarily agree with the route they’ve taken but I don’t suppose for one second, however young and fearless, that any of them took the decision lightly.

Not since the Chase Out campaign of the mid-90s has there been a single protest aimed at the club’s owner(s) and not since the Worthy Out movement of the mid-Noughties have we felt the need to raise the collective head so high above the parapet.

It’s not something that occurs on a whim.

Others may disagree, but I see us as a resilient, hardy bunch who can take on the chin almost anything that’s thrown at us. And we have had to endure our fair share. For all the jubilant ups there have been an equivalent number of heart-wrenching downs, especially when we hit the refined air of the Premier League. We don’t compete – not properly.

And that’s why I just can’t get as angry as some over the banners, the drum and singing at The Valley.

I accept Dean Smith’s assertion that the negative chanting and gallows humour probably don’t have a particularly positive impact on the mindset of the players, but equally, these folk travel far and wide to follow the Canaries and, in the Premier League, have been dished up an absolute load of rubbish.

The negativity and black humour is only a thing because they have nothing to get behind and support. Missed tackles, stray passes and half-heartedness are not going to rally the faithful however cleverly it’s spun and whatever the perceived mitigation.

Sunday was slightly different from the average Premier League away day because it was one where we weren’t faced with teams who were technically better than us – the angst came from playing against opposition from two tiers lower but who still, for long spells, were better than us.

Away trips, like tonight’s, are simply seen as unwinnable before a ball has even been kicked. In a two-horse race (three if we include the draw) you can get 9/1 for the City win, while West Ham – who let’s not forget are not even part of the big six – are 1/3!

The Yellow Army will still travel in numbers and still with hope in their hearts because that’s what they do, but knowing that it will take a turnaround and upset of extraordinary proportions for City to even get a point from the game.

So forgive us if we’ve all become a little disillusioned and cynical. Setbacks and disappointments have become our norm. Misery is now our default setting.

In the cyclical world of football, this is hopefully only a phase and there will be happier times ahead but in the here and now there’s no escaping how disheartening this all is.

So, personally, I think we should cut the Delia Out brigade some slack. Ultimately, they’re hurting, as we all are, and whether their angst has been directed in the right direction or not, they felt the need to do and say something.

And, like most of us, they want to see the club they love being given a chance to fulfil its potential.

There’ll be those who’ll not thank me for penning this piece but to those people, I say I salute you. To have been able to watch what’s unfolded in #NCFC world since August and still not feel any sense of gloom or cynicism is quite something.

To me, it feels like something needs to change, or else we forgo any daft notions of making it to the Premier League and competing. It feels like a discussion that should take place, even though it won’t.

The young ‘uns can see that too.

#OnThisDay 43 years ago, the 1980 Goal of the Season and arguably the greatest #NCFC goal of all time.

Here is a snippet from the excellent @justin_fashanu documentary #ForbiddenGames.