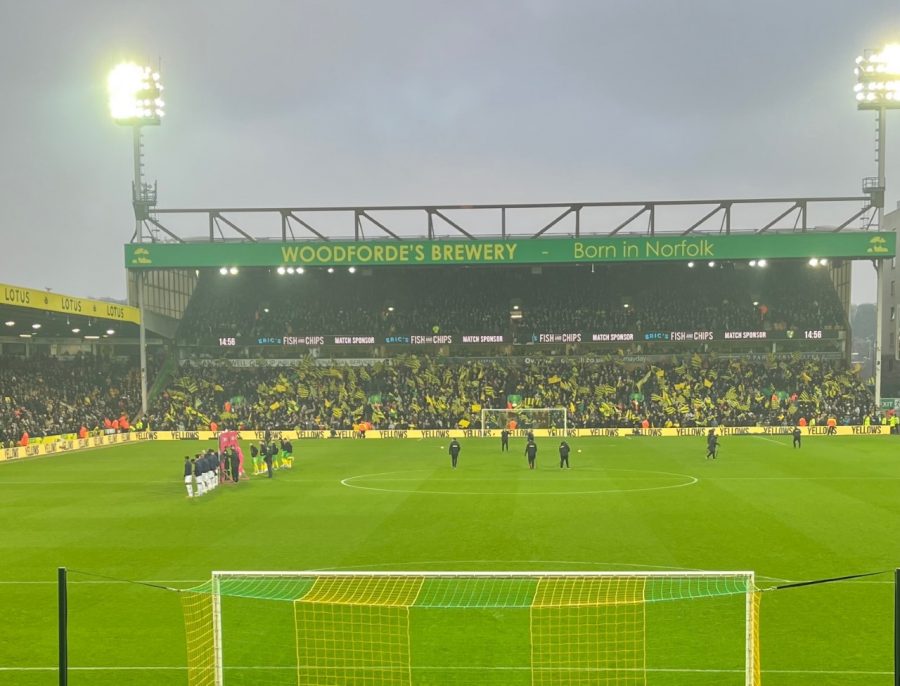 We’ve not experienced a feeling like that for a while. Felt good, right?

It’s all too easy to get carried along on the tide of emotion on days like yesterday and before you know it we’re all proclaiming “WE CAN DO THIS” a few hours after resigning ourselves to City being the worst team in Premier League history.

At the end of the day, it was just a single win against a team who are, quite frankly, fairly cr.@p – like we have been for most of the season – but it was also a perfect example of why we still go, even when all feels lost.

And fair play to Dean Smith, Craig Shakespeare and the players. They found some belief and desire from somewhere when many of us had lost faith and had given up.

Ironically, the first inkling of this stirring afternoon came in defeat at the London Stadium where, amidst the gloom and disappointment of that evening, sprang one or two signs of promise.

The most obvious one was the performance of Adam Idah, who, in Stratford, appeared to revel in being one of the two strikers in what, at times, become a traditional 4-4-2.

As a lone striker, Idah finds it tough. His first touch often fails him when back to goal and the opportunity to run the channels is limited. It looks like an uncomfortable struggle.

But put him in the vicinity of Teemu Pukki…

All of a sudden, with Pukki occupying another defender, that first touch doesn’t have to be quite so precise and there is a necessity, with one less midfielder, for that ball to be slid into the channel one or two passes earlier. In doing so it offers Idah the chance to face up a centre-back he’s dragged out wide or a full-back he’s forced to tuck in.

And it worked like a dream. Just as it did on Dean and Shakey’s whiteboard.

I guess the problems come further down the track when we face teams against whom playing 4-4-2, or a variation of it, would be suicidal, but against Rafa’s hapless Evertonians, who also are ploughing the 4-4-2 track, it was the right call from Smith.

The big concern when the team was announced – for me at least – was whether the midfield pivot of Jacob Sorensen and Pierre Lees-Melou would be good enough or robust enough to match up with Abdoulaye Doucoure and Andre Gomes.

I needn’t have stressed. Both were magnificent, especially in that breathless first half during which the game was effectively won.

In a 4-4-2 (4-5-1 out of possession), the onus tends to fall on the wide men to join in, leaving the two centre mids to hold and be solid while also ensuring there is no gaping chasm between them and the front two. They got it absolutely spot.

Lees-Melou tended to be the more advanced of the two, always looking for a shooting opportunity on the edge of the box, while Sorensen reveled in plugging the gaps in an Oliver Skipp style.

That’s not to say it will work like that every week against better opposition, but yesterday it did. And if nothing else, it will have reminded Dean Smith that Kenny McLean doesn’t have to be the first name on the teamsheet. The alternatives, if they find that level of performance on a consistent basis, are there.

Ironically, going back to the summer I’d have given anything for a City midfield pairing akin to Gomes and Doucoure. Shows how much I know.

But it takes more than a rock-solid midfield engine room and a reborn striker to win a game of Premier League football.

So poor had Everton been in that first half it was clear there would be a response. There had to be and there was. When Richarlison was finally added to the fray in place of the wholly ineffective Salomón Rondón, all of Rafa’s big guns had been deployed.

It then became a battle of will rather than tactics and, on this occasion, City didn’t crumble.

Grant Hanley, clearly playing through the pain barrier, was every bit the Braveheart hero we all know him to be, while the edge that Brandon Williams brings to the team – and which nudges him ahead of Dimitris Giannoulis in the pecking order – came to the fore and some.

The running battle the Man Utd loanee had with Anthony Gordon was one of many fascinating sub-plots that ran through the afternoon, and even though he had to depart early through the onset of cramp, it was game, set, match Williams.

Ben Gibson and Max Aarons too stepped up when stepping up was needed, and supported by the fearless Tim Krul it was a defensive effort on a heroic scale, especially as two of those three were to suffer pain and injury for the cause.

Part of that same team effort were the two wide men – Milot Rashica and Josh Sargent – both of whom played their part and who will have no doubt clocked up running metrics that will land them in their head coach’s good books. If Rashica had rolled that shot in the final seconds inside rather than onto the post, it would have been a just reward for a fine shift.

So, the rarity of a good one at the Carra; one that got the blood flowing, the adrenalin pumping and the heart racing. Just how we like it.

One that permitted us time to embrace and enjoy the small things, like the one-man pitch invasion, the crowd in the Geoffrey Watling getting continually incensed as Everton players sneaked an extra metre or two from a throw-in, and that gent in the same stand joyously hand-delivering rather than throwing the ball to an Everton defender a to use up vital seconds.

An afternoon that brought joy and happiness and smiles and invoked a feeling we’ve not experienced for a very long time.

And, yes, I’ve fallen into the trap too, it brought us hope. At least until Friday.