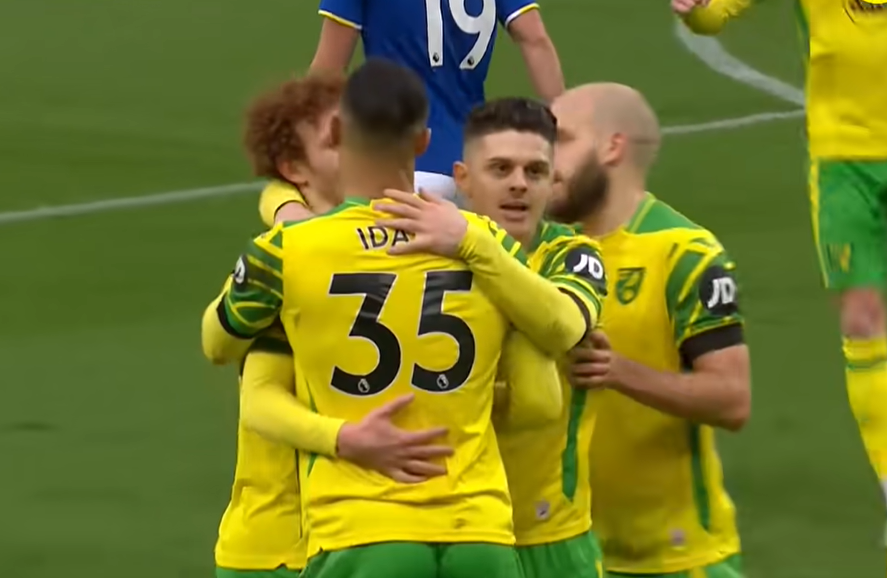 It was a big weekend for the Football Family Mitton.

My son, Henry, has already accumulated more first-team experience before his 12th birthday than I had at his age. At this point, I was still seven months away from my City debut.

But except for a single appearance in each of the FA and League Cups, all of Henry’s experience had come in the Championship. This past Saturday, however, finally brought about his first Premier League game at Carrow Road.

I say finally, as this has been long delayed. His first opportunity should have come in February 2020, but Sky’s decision to move our home game against Leicester to a Friday night robbed him of that milestone, along with a mascot experience package, before Covid then resulted in the cancellation of the subsequent Southampton game.

All a minor inconvenience in the global scheme of things, of course, but disappointing enough for a young fan.

Our journey from central Bedfordshire on Saturday morning was probably typical of many others that morning. Excited to be going to the game, as any exiles making rare visits are bound to be, but with a dull edge brought about by the team’s, well, dull edge. Fans of most clubs very often travel more in hope than expectation, and that was certainly the case on Saturday.

We’re all aware of the circumstances. So many games without a win, without a goal. The status of plucky underdogs that a lot of people were secretly rooting for, replaced by a national laughing-stock or, more insidious and worrying, the tone befitting unwelcome interlopers who aren’t deemed worthy of the time and opportunities being afforded them.

What all of our pre-match chat boiled down to was this – just give us a performance.  Show some bottle, some commitment, make the opposition work for everything. All the things that Norwich City are most definitely not famous for.

Give us that, and if you must go down, go down fighting.

Well, those boys in yellow and green gave us all that, and more, against Everton.

From the start, there was an energy and verve about the side that was exemplified by the front four. I would suggest that you’ll do well to see a front four work as hard as Milot Rashica, Teemu Pukki, Adam Idah, and Josh Sargent did in this game.

I’m sure that Dean Smith wouldn’t have anticipated having to replace both full backs, so I dare say the intent would have been to give more than just Sargent a few minutes off at the end.  All four of them worked their socks off, and the fact that Milot and Teemu set off on that lung-bursting 2-on-1 at the death speaks wonders to their effort and determination to see the game out.

As well as working hard, they also appeared a more cohesive unit than we’ve seen in recent weeks.  Rashica is clearly the class of the summer recruitment – Mathias Normann could probably run him close when restored to full fitness – and you can feel his influence increase week on week.

Josh Sargent has come in for criticism – understandably, to some degree, although as is often the case the level of vitriol reaches unnecessary levels. He’s a tireless worker, he wins more than his share of aerial battles, and while he’s unlikely to go on jinking runs putting defenders on their heels, the quality of his low, driven cross that put Michael Keane in all sorts of trouble for the opener was undeniable.

We should all hope that Josh gets a confidence boost from that and the ovation he received when he departed, and his performances kick on.

As for Teemu and Adam, the changed dimension from a single attacker ploughing a lone furrow appeared to work well. Idah’s not an old-school number 9 but he won several headers against Everton that sparked attacking moves, and it was a deft finish to notch for the first time at Carrow Road – although he did well to recover from a heavy first touch that almost negated the fantastic work of Brandon Williams to set him up.

And while it wasn’t Teemu’s best day, his constant motion and interchange with the rest did the job the team needed from him.  We saw Rashica and Sargent swapping sides; sometimes it would be Idah playing wider with Sargent central.

As a four, they all put in an excellent shift and got their rewards.

Elsewhere, there was a fire and determination that hasn’t always been present.  I mentioned Williams earlier, and he deserves recognition not just for the interception, driving run, and piercing pass to set up Idah, but for a tremendous all-around performance.

Yet it’s hard to not shout-out the whole team.

The level of effort was consistent across the park, and it was encouraging to see the performance of Sam Byram off the bench, particularly if the injury to Max Aarons is as bad as it looked, as he limped around the field on cutches at the end.

The midfield pairing of Jacob Sørensen and Pierre Lees-Melou did enough to make me want to see them in there again, particularly pleasing for Sørensen given the difficulty he’s had in getting minutes in what is generally considered to be his favoured position.

That said, and while it feels somewhat churlish to do this after such an uplifting afternoon, that midfield area does look vulnerable when exchanging a CDM role to facilitate the front four.

To combat that, the plan was clearly to press on halfway but no further, only on rare occasions did we push higher up and therefore stretch the formation too much, and for the most part one could see the more compact defensive set up limiting space for the opposition to work in.

However, on more than one occasion, that space in front of the centre halves did open up, most often with either Rondon or Calvert-Lewin dropping into it, or Demari Gray coming in from his left-wing station.

Gray in particular, operating right in front of me in Block N of the South Stand, looked dangerous early on – quick, direct, and skilful, in the early stages he had Max in reverse on several occasions.

The gaps most often appeared when PLM joined the pressing numbers. An Everton shirt would then drop into that space, pulling Grant Hanley or Ben Gibson out with them.

Teams other than Everton, with the mess in which they find themselves right now, will likely be quick to exploit this space. If Dean Smith and the back-room task can find the way to reduce and restrict those opportunities, while maintaining the front four, allowing them to get more and more cohesive as they play more together, then there are reasons to believe the improvement can continue.

I talked about fight and determination, and I’m struggling to think of many previous examples where a Norwich City side have gone so far down the route of the dark arts – refusing to be intimidated, putting themselves about on the pitch, and using every tactic in the book in the second half to break up the flow of the game.

For my taste, we almost went too far with it – as the seven minutes of stoppage time would indicate.

How often have we seen teams get punished so late in the game? For me, at some point, it becomes more important to get the game over with than give a referee an excuse to extend the inevitable late-game barrage we’ll have to endure.

But for a side that is too often deemed soft and a push-over, a belligerent attitude will be more of a help than a hindrance in the coming weeks, starting with what is now a massive game with Watford on Friday.

As has been mentioned countless times in every facet of life, it’s the hope that kills, and that’s what these players delivered on Saturday.

An important three points, yes, but reasons to think that just maybe, we’re still in it.

Off the bottom, one point from safety, and for that afternoon at least, players and fans back in sync. Nothing less than the same levels of commitment and courage will be required on Friday – from players and fans alike.