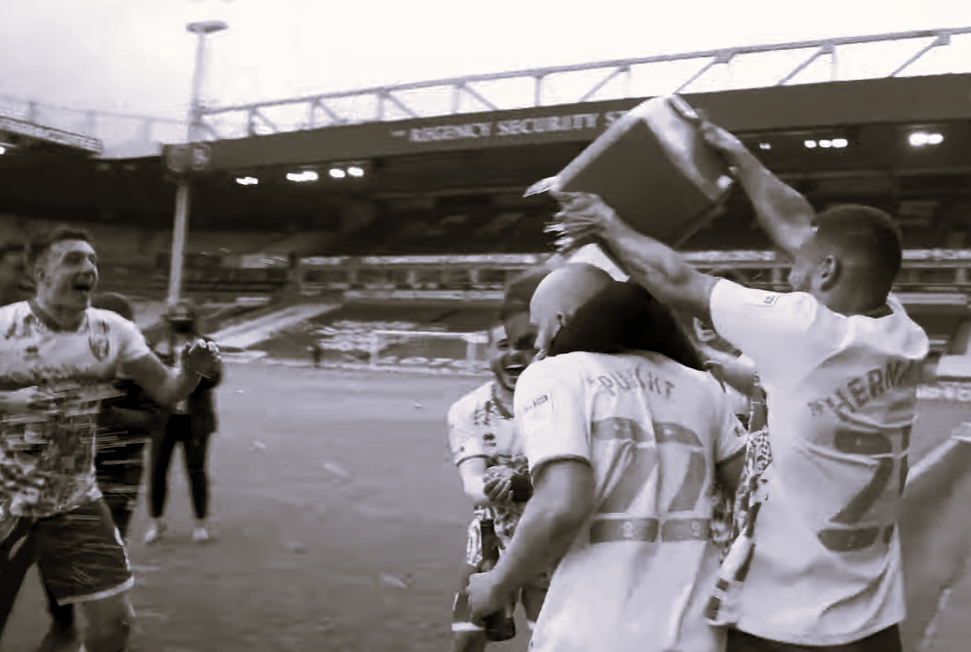 With no match report to write this week, there has been an opportunity to spend a little time reflecting on the season so far, to reflect on what went so wrong for Daniel Farke, and what has changed under Dean Smith.

Before I get into the meat of it, let me stress this is little more than the thoughts of a long-distance fan, whose exposure to the Canaries is usually limited to the TV coverage I can find in whichever country I happen to be in at the time.

I’m not a qualified coach or tactician – not even on FIFA – and my reflections are based on my own observations. I haven’t spent hours poring over the masses of data and statistics available on various websites. If you have, feel free to add to my musings in the comments.

So the elephant in the room. That sacking.  Was it inevitable?

If you had asked anyone during the closed season, they would most likely have said no.  There was a sense of cautious optimism that we had learned lessons and that things would be different this time. Yet, barely a dozen games into the season, the affable German who had brought so much pride to NR1 was gone.

Let’s be frank – no managerial candidate pun intended – Farke was not sacked for the 7-0 and 5-0 drubbings handed out by Chelsea and Man City. He was sacked because he failed, once again, to win the games in the so-called relegation mini-league.

The top Premier League sides are capable of handing out such drubbings to almost any team in the league and these losses, whilst painful, have to be taken on the chin.

With the lion of relegation chasing, you don’t need to be the fastest zebra in the pack, just faster than the last three. Yet, for the second top-flight season in succession, City were the lame equine struggling at the back with the lions licking their lips in anticipation of another taste of canary pie.

But why? We were promised after ‘the last time’ that lessons had been identified and that the approach would be different.

For four years, we played possession-based football with an identity so distinct that we gave it a name. Farkeball. We retained possession, we worked the ball up the pitch, we waited for the killer ball. This mantra brought so much success, a record points totals, and goals galore. In the Championship.

In the Premier League, in 2018/19, it had so nearly worked. But for every game where City showed promise, there was always a slip in possession, a ball given away leading to an opposition goal. With a lengthening injury list, City toiled but as the season progressed, there were tentative signs of improvement, right up until the world came shuddering to a halt.

What followed after Project Restart can be filed into the darkest Canary archives.

Whilst Webber and Farke may have identified the lessons of the previous campaign, when and how they chose to implement them is a matter for debate.  What followed last season was still the Farkeball we all knew and loved.

Admittedly though there was a slightly more pragmatic approach to games. The full-backs were a little less gung-ho and the addition of Ollie Skipp added an obdurate streak into the previous porous midfield.

But it was the same shape, the same objectives. And it was even more effective. This wasn’t Boaty McBoatface, it was HMS P!ss The League.

So, come the closed season, Stuart went shopping. We were looking, we were told, for versatile wide players who could also play through the middle and score goals. We spent unprecedented amounts of money (albeit caveated with ‘for Norwich’) and overhauled the squad in order to suit the new vision.

According to various sound bites, we were to play a new style, a 4-3-3 formation, based on our analysis of other successful survivors in the league. With the pieces in place, once again, Covid intervened and as a result, we went into the first game of the season with our new recipe looking distinctly undercooked.

And here is my first point.

If we had identified these lessons 12 months previously, why had we not adjusted our shape in the less intense atmosphere of the Championship? Why did we persist with 4-2-3-1?

OK, I know Daniel was supposedly not wedded to a particular formation and that we were flexible, but the 11 on the pitch were set up as four defensive players, two screening players, three flexible attackers and the Goat.

If we had instead played the way we intended to play should we be promoted, then the effects of the truncated pre-season would have been less severe. For the second promotion season in succession, we watched teams who finished below us, perform so-called miracles in the Premier League and leave us trailing.

My second point may seem slightly strange at first. One of our problems was our leading goalscorer – Teemu Pukki.

Almost by accident, Pukki had become the headline act for Farkeball. His uncanny ability to get in behind the defenders and convert chance after chance is what has rocketed him up the club’s all-time top scorers list.

His seemingly telepathic connection with the players behind him, whether that was Emi Buendia, Todd Cantwell or Marco Stiepermann, led to goal after goal in the Championship. But why by accident?

Remember, at the start of the 2018-19 season, Teemu was not the main man. Jordan Rhodes had been brought in to provide the edge, with Teemu relegated to a support, number 10 type role. It was only after a succession of goals for Finland that Daniel took the fateful decision to move Pukki into the prime position and to slot Marco ‘born to score goals’ Stiepermann in behind.

That decision propelled the Canaries to promotion and into the Premier League. The first game against Liverpool was a defining moment as while Pukki slotted calmly home as we won the second half, Stiepermann looked out of his depth and wasted several chances that he would have buried in previous seasons.

So why highlight this, of all things?

Premier League managers are smart. They soon identified that if you defended deep and denied Pukki the space in behind, then you blunted City’s main attacking threat.  Moreover, with Stiepi failing to make the step up, not only was Pukki robbed of that awkward physical support that had upset many a defence, but also City had lost an important out ball.

When pressed at the back and forced to go long, Tim Krul no longer had a big target to aim for and the ball inevitably came straight back.

All of which makes the decision to go with 4-3-3 all the more curious.

The best exponents will usually have three quick, athletic and physical front players who can interchange, get into the box and cause a goal threat from crosses. Pukki at the point of this spear was never going to work – he simply isn’t that kind of player – which is why I feel some of the early games of the season saw us shorn of attacking intent and often with barely a player in the box when the ball came in. It’s also why we failed to register any kind of meaningful result in those early games.

This brings us neatly to where we are now.  Notwithstanding the ‘bounce’ game against Southampton, City had to get worse before they got better. Admittedly, what is hopefully the nadir of the season was precipitated by another unprecedented injury list, but in the last few games, the changes made in the approach to the game by Dean Smith and Craig Shakespeare have gradually become more evident.

Gone is Farkeball. Gone is the search for the slide rule pass in behind a packed defense. In their place is a far more pragmatic approach to the game. A simpler ethos, playing the percentage game – not in the old Wimbledon route one manner, but more an approach that requires the ball to be moved forward quickly and delivered into threatening areas.

Key to this has been the dramatic improvements in both Adam Idah and Josh Sargent, and here we may finally have found the answer to the Stiepermann dilemma. The answer was actually there all along.

Idah has now taken the Jordan Rhodes role, leading the line, whilst Pukki is the support act, an arrangement that has benefitted both players. With more long balls being played both by Krul/Gunn and by the defence, there are now two awkward physical targets to aim for.  Wide on the right, Sargent is more effective in an aerial duel against the full-back than when he is central, Idah looks transformed in the middle.

All credit to the coaching team.

As well as a desire to get the ball forward more quickly, there have been other more subtle tweaks of late.

On the right, Max Aarons still gets forward in support of Sargent, but the cavalier overlapping runs have been tempered. More usually he is combining in a triangle aiming to set Sargent free, cutting inside to create space on the flanks.

On the left, a noticeable feature of late has been the surging runs made by Brandon Williams. Again, no longer looking to go outside the full-back, instead of ploughing a furrow slightly inside the pitch, creating space for Milot Rashica.

And now when City finally get into the final third, the manner of the delivery has changed.  No longer looking for the cute ball in behind the centre-backs, there is far more emphasis on getting the ball to the byline and pulling a cross back into the area.

The last two games have illustrated this percentage game most clearly. In both, defenders have put the ball past their keeper at the near post. In both games, had they missed, Rashica has been poised to tap in.

So what we are seeing is part evolution, part revolution. Evolution of Webber and Farke’s pre-season (post-relegation) master plan – one that should have been enacted 12 months previously. Revolution in the abandonment of the purity of Farkeball in a quest to become more obdurate in defence and more potent in attack.

Under the affable, charismatic Farke, City had an identity, a style, even a swagger.  We all fell in love with it and all that it brought with it – the famous Parker coat, the olés and that famous wink.

Life under Smith and Shakespeare is unlikely to bring such a sense of connection, such a joie de vivre. But it seems more likely to deliver one thing that our favourite German never really nailed in the EPL –  real hope for a survival battle.