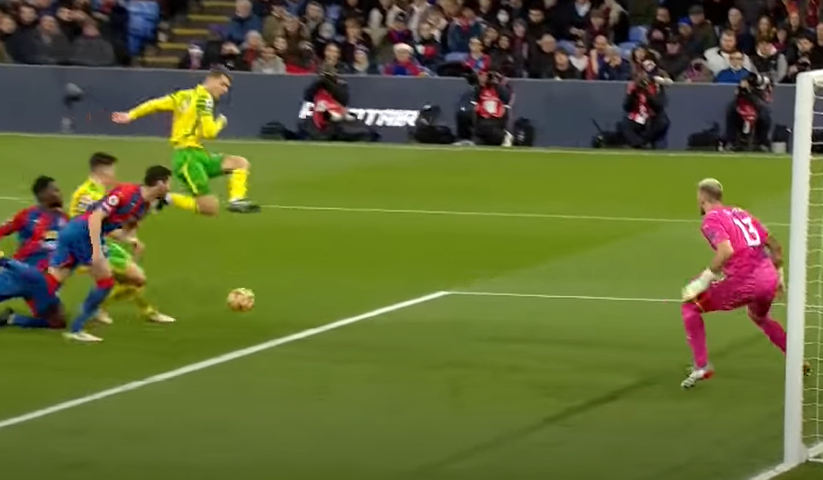 With the dreaded dotted line finally breached by Norwich City, their next task is to start dragging new rivals into the relegation battle. Crystal Palace’s visit tomorrow night provides them with the perfect opportunity to do just that.

Patrick Viera’s side are currently 13th in the Premier League table and eight points ahead of the Canaries, but they’ve won the same number of games and arrive at Carrow Road with an appalling away record so far this campaign.

Just a few weeks ago, when City were labelled by many the worst Premier League side of all time and Palace continued to receive praise as their transfer-bolstered side put on a series of entertaining performances, the idea of this match as an even affair seemed ludicrous.

To add fuel to that fire Norwich were soundly beaten at Selhurst Park on 28 December, on one of the most demoralising afternoons their fans have faced in a long time.

But how quickly the tables have turned since those dark days, as Dean Smith’s assertion that the return of his injured players would be like new signings proved prescient in a barren transfer window for sporting director Stuart Webber.

Since the turn of the year, City have won four of their five games, keeping three clean sheets in the process.

Milot Rashica has looked more dangerous than ever since returning from a number of weeks out, Billy Gilmour produced one of his best performances in a Norwich shirt at Molineux on Saturday and the return of a certain Mathias Normann has lifted the spirits at Colney.

That both the Scot and the Norwegian will struggle to make the starting XI tomorrow speaks volumes for how impressive Kenny McLean and Pierre Lees-Melou have been in their absence.

As declared by McLean, the return of two of City’s most talented performers adds depth to a squad that looked thin for that festive trip to south London.

“With Billy and Mathias coming back the squad has been strengthened. “They have been out for a long time, and they are big players for us. So the squad has strengthened over the break that we have had, which is good for us.

“We have got a fully fit squad now and competition for places is there. Nobody takes their place for granted so it is case of we need to keep performing at the highest level that we possibly can. That is what it is all about.”

Perhaps the number 23 and Lees-Melou are two of the less fashionable members of the City squad, but their presence has been vital in a team that’s received a serious injection of fight, desire and that much-discussed ‘hard to beat’ quality.

Where Palace faced a submissive and subordinate side just over a month ago, they can be sure they’ll leave NR1 having worked hard, and any complacency will be punished by one of the top flight’s in-form sides.

That’s not to say that Palace don’t have the quality to take all three points.

After a poor attacking display from Wolves followed matches against impotent Everton and Watford sides, City are likely to face their sternest defensive test since visiting West Ham tomorrow, but Grant Hanley and Ben Gibson have hit their stride just at the right time.

Whether the physical duo can combat the likes of Odsonne Edouard and Conor Gallagher remains to be seen, but they’re starting to resemble the solid duo they were in the run-in last term when City’s canter to the Championship title was based on defensive strength.

As  Smith has outlined on numerous occasions, a clean sheet tomorrow and a vital point is guaranteed for his side.

With Ozan Kabak and Andrew Omobamidele unavailable the pair are almost guaranteed to start. Lukas Rupp is back in the frame to be in the matchday squad, while Josh Sargent is a doubt after illness forced him to withdraw from the starting lineup on Saturday.

On the face of it, the visit of a talented team presents a difficult task for City, but in reality these are the games they must see as opportunities to win if they’re to stay up.

They’ve done the hard bit, now comes step one of getting the job done.

S to the E@CanaryEllis·
57m