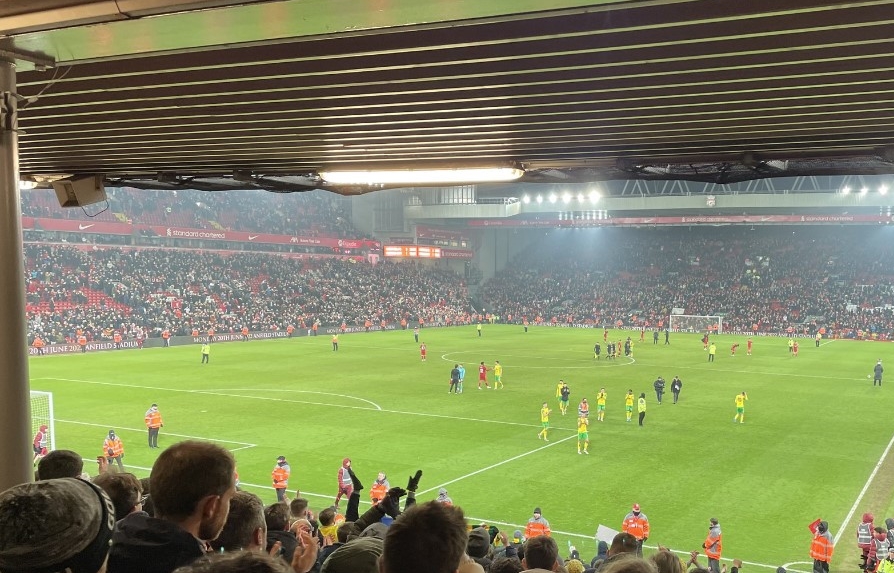 There’s always something about Liverpool away that jars.

That probably boils down to the fact that they’re a very good side and we usually end up on the receiving end of a tonking, but there’s so much about the Anfield experience that can get the hackles up if you’re a visitor – especially one clad in yellow and green.

I’ll not list them because that same Liverpool fan who called me sad and bitter 12 days ago may return for round two, but you all know what I mean. 🙂

But last night it wasn’t Liverpool FC per se who did the jarring. Instead, step forward ITV Sport.

We’ve not had the pleasure of a live FA Cup game on ITV for a very long time (Paulton Rovers in the FA Cup possibly?) and on the evidence of last night, that’s no bad thing.

It all began before a ball had been kicked – 45 minutes worth of Mark Pougatch, Roy Keane and Ian Wright eulogizing over the new Carabao Cup champions while having to begrudgingly squeeze in five minutes of ill-informed Norwich City chat before returning to the Liver-love-in.

It was a tough listen and the players hadn’t even yet lined up in the tunnel.

When they finally did, I swear I heard Keane utter the words “Norwich are a Premier League club, they deserve respect”; ironic given that he’d not shown us an ounce in the preceding 40 minutes but maybe the penny had dropped or, more likely, a producer had had a word in an earpiece.

Then enter “Lee Dixon alongside our match commentator Sam Matterface”.

Neither was clearly listening when Roy mumbled those prophetic words.

To be fair, it’s not an easy balance to strike when you’re commentating on what you’ve already decided will be a mismatch. If you’re not careful you find yourself oscillating wildly between being overly patronizing and overly critical.

Neither Matterface nor Dixon were careful. Both of them did oscillate wildly in both directions and managed to do so while offering the impression that Liverpool were up against a plucky underdog from League Two.

It was unlistenable – at least for City fans.

Luckily, some typically ropey City defending proffered the mighty Reds a 2-0 halftime lead and, even better, was that Matterface was offered numerous opportunities to get his tongue around M-i-n-a-m-i-n-o...

It also gave Dixon a brief chance to stop reminding us how terrible our Premier League record has been this season – as if we needed telling.

For obvious reasons, I gave Pougath, Keane and Dixon a swerve at half-time. I knew what was coming.

That City improved a bit in the second-half and Liverpool didn’t “put the game to bed” was clearly a source of irritation for Dixerface, and worse was to come when, just after the Arsenal legend declared that “no-one will be more surprised than me” [if Norwich score a goal], Lukas Rupp had the temerity to fizz one past Alisson.

That wasn’t part of the plan nor part of Sam’s script.

Imagine the horror if Jonathan Rowe’s shot had flown into the top corner instead of being brilliantly saved.

But the stats don’t lie. We only had two shots on target. The best side won and it was left to Wright and Keane to hammer the final nail home when they agreed City were never going to win the game from 2-0 and it’s all too easy to rally a little once the cause is a lost one.

The final credits were, typically, a homage to the quadruple-chasers in red with barely a yellow shirt in sight.

For a more insightful analysis, I preferred instead to listen to Dean Smith who of course admitted that the best team won but was also happy that we, at times, were able to ask questions of the Liverpool backline.

He also told BBC Sport, “a lot of players who haven’t had many minutes have come in and done exceptionally well. That’ll help us [in] picking the team.”

What he didn’t mention is that there were also a few who did harm to their chances of making his starting XI, but almost forgotten behind the din of Klopp’s ten changes from Sunday’s starting XI was the fact that Smith made seven changes from the defeat at Southampton.

Perhaps it doesn’t count because we lost at St Mary’s and Liverpool won at Wembley, but the general lack of acknowledgment around us being the have-nots competing in a footballing world of very wealthy haves never fails to irk.

Yes, Klopp made ten changes but so what… he has virtually another team of internationals at his disposal.

Not so Dean Smith.

So, as expected, our FA Cup journey of 2022 comes to an end but it wasn’t the complete mauling on live terrestrial TV that some of us feared.

Other than possibly Przemyslaw Placheta, whose argument with an advertising hoarding looked very painful, there looked to have been no real damage done last night, either physical or mental.

In fact, there were at least a couple who must have pushed themselves to the forefront of Smith’s thoughts ahead of the Brentford game – Rupp and Rowe, in particular, putting forward solid cases for a start on Saturday.

And even better… we’re now spared the ITV Sport treatment for at least the rest of the season.

There is a downside though. They have wrestled the rights for the Championship highlights package from Quest TV. So there is a chance…

If ever there was an incentive to beat Brentford and make a fight of this.