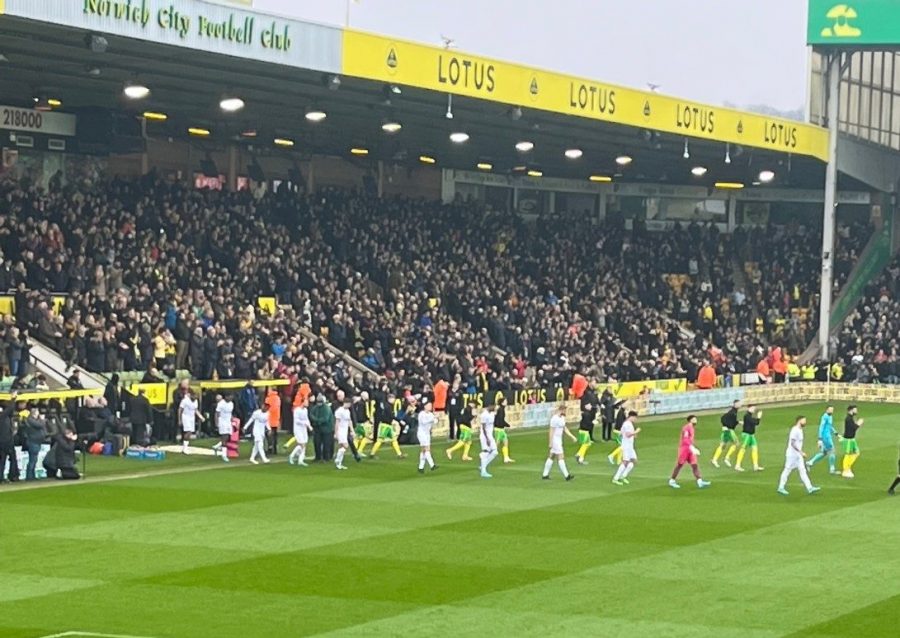 At times like this, it seems a little frivolous watching football, even when Carrow Road was bedecked in Yellow and Blue. There was always the hope that the football might prove a welcome distraction. Alas no.

Dean Smith said that this wasn’t a must-win game, but it was a must-not-lose game.  We lost.  Presumably, he has a mammoth task now, convincing his players that there is a reason to continue to fight for the rest of the season.  Assuming, that is, that they were fighting in the first place.

They say madness is doing the same thing over and over again and expecting a different result. I cannot be the only person whose heart sank when I saw ‘Mclean, Gilmour and Norman’ on the team sheet. No place even on the bench for Lukas Rupp – presumably injured. Sam Byram came in at right-back, perhaps to provide aerial strength to counted a big Brentford side.

After the early exchanges, it was City who created the first chance. Brentford were slack playing the ball out at the back and City stole possession. Billy Gilmour laid the ball off to Milot Rashica who elected to flick the ball with the outside of his boot, rather than a more positive shot, and Raya made an easy take.

City continued, dominating the ball for the first 10 minutes. They were neat, tidy, almost slick at times in possession, playing the ball out from the back.  At times they broke quickly but whenever they got to the final third, they stopped allowing Brentford time to re-group.  It was like watching a Farke-era game all over again.

City created more chances, A Tim Krul kick caught a flick from a Brentford defender and fell for Teemu Pukki whose near-post shot was well saved by Raya. Rashica pulled a ball back slightly behind Josh Sargent who was unable to keep his shot down.

It wasn’t all City. Christian Eriksen was pulling all the strings in the Brentford midfield with a series of superb balls unpicking the City defence – Sergi Canos appearing to be surprised that the ball even met his run and as a result allowing Grant Hanley to beat him to the ball.

The opening 20 minutes had seen a fair number of robust challenges from Brentford, with referee Taylor electing to leave the instigators unpunished, despite some appearing to be obvious yellows. Rashica slipped free with a trademark turn only to be hauled back by Ajer. Free kick but no card.

On 23 minutes, Brandon Williams burst forward. Ajer slid in with a scything tackle that even Taylor couldn’t ignore and he finally brandished the yellow card.

City had another spell of possession and pressure, but it was becoming very scruffy, punctuated by a series of niggling fouls. City finally played a free-kick that found Sargent out wide, the ball was moved slickly to Pukki and Rashica before the shot was blocked.  Moments later Gilmour had a weak shot from the edge of the box.

The game was getting even more staccato. Brentford edged down the City left with a series of throw-ins, more akin to Rugby possession than football. Finally, they were within the range of Pinnock’s long throws.  The looping ball was cleared initially but fell to Canos on the edge of the box. His shot, through a crowd of players, was well saved by Krul for a corner.

It was Eriksen who stepped up to deliver a perfect near-post ball. Ajer got the flick. Williams got dragged in ball chasing and left Toney unmarked to bury the ball in the back of the net.

City struck straight back, earning a corner of their own.  Unfortunately, the delivery from Gilmour was poor and easily cleared.

Brentford gained confidence from the goal and began to have more of the possession, but City still made half chances. Williams broke forward only to be pulled down by Eriksen. The loanee went to retaliate but then saw who it was and elected to hug the Dane – who eventually was awarded a yellow for the initial tackle.

As the halftime whistle went, a smattering of boos briefly rung out around Carrow Road.

The second half started with Brentford continuing as they finished the first, but it was Williams who made the first inroads with a powerful run. Mbeumo shoved him to the ground inside the penalty box but VAR decided no penalty.

Brentford broke back and Hanley blocked the cross from the right for another corner. This time it was cleared initially by Ben Gibson and then by Williams popping up on the right. The referee signalled a VAR check was in progress, which revealed a Gibson challenge with a high boot, exacerbated by the stooping Brentford player.

It was unnecessary – he could have gone with his head. The referee was called to the pitchside monitor and a penalty was awarded. Krul tried his usual tricks but could do nothing to stop Toney scoring his second.

City moved forward again. This time McLean was caught in the area and went down theatrically – there was never enough contact for a penalty. From the throw-in, Williams put in a good cross which was cleared.

Moments later Toney was through, running slightly away from goal.  He slowed, waited for the lunge from Gibson and went down. Clever. Frustrating. Clear penalty. More Krul games. Same result. 3-0.

From that moment on, football rarely broke out. Brentford took every opportunity to disrupt the game with foul after foul.  Perhaps if Referee Taylor had not been so keen to leave challenges unpunished in the first half, we might have actually seen some football. Alas no.

On 65 though, City thought they had one back. Rashica had quick feet to dance past two players only to be fouled by Canos. The free-kick was played in, after a good turn by Pukki the ball was cleared to McLean who played it in. Brentford could only clear back to Pukki. The ball came across the area for Rashica to fire home from the edge of the box.

The Carrow Road celebrations were short-lived as a forensic VAR call showed Pukki ducking under the ball in an apparently off-side position. The ball taking the merest skim off his back. It took three or four minutes to decide that this was a clear and obvious error and the goal was disallowed. However, as the referee signalled no goal, a subsequent replay showed that Pukki seemed to be behind the ball as McLean played it in and therefore onside.

With 73 minutes on the clock, Smith finally made a change bringing on Jon Rowe; Glimour giving a surprised ‘who me?’ to the bench. Yes Billy. You.

Brentford then made a substitution too, further breaking up the game. On 75 they scored again. Pinnock winding up for a long throw played it short. The ball came straight back for a quick cross into the box.  Krul saved twice before Mbeumo put the ball in the net.  But there was another VAR check which this time clearly showed offside at the time of the cross.

On 80, two more changes for City, Pierre Lees-Melou on for Normann and Max Aarons on for Williams.  City finally began to play with the Frenchman spraying some great passes around. Rowe had several great runs – Roerslev checking him with a trailing thigh that looked worthy of a yellow – and five minutes later being taken out again by the same player who was finally punished, but should have been walking off.

On 91, Rashica did well down the left. He played the ball to Rowe in the box who battled well and pulled the ball back for Pukki to lash home to give some cheer to the home support.

Are City going to be relegated? Yes.

Is Billy Gilmour the wonder kid that he is claimed to be  – No.

Compare and contrast with Eriksen – admittedly a world-class player. Other than the early ball to Rashica, and a late run into the box, almost every ball to Gilmour went six yards sideways or backwards. Yes, he dictates tempo but there is no threat.

In the first half City had over 60 per cent possession yet he barely produced a threat. Eriksen on the other hand played a succession of dangerous balls and crosses from all angles. What we would give for him in our team.

And set pieces. Wee Billy took the lot. Free kicks, corners. Every one as woeful as the last. Whatever talent he is supposed to have, dead ball situations are not it.

Are City any better off than with Farke? On this evidence, no.

Is Dean Smith the right man in charge? Well, it will be fairer to judge him when he has had a transfer window to build his own squad, but one feels that Rowe would have started today under the previous management.

Turning out the same suspects in midfield was uninspiring to say the least. The decisiveness to hook Cantwell at halftime in his first game was not in evidence yesterday. I was genuinely surprised to see the same eleven out for the second half.  And leaving it to 73 minutes and 3-0 until finally making a change…

But chins up. It’s Chelsea next…