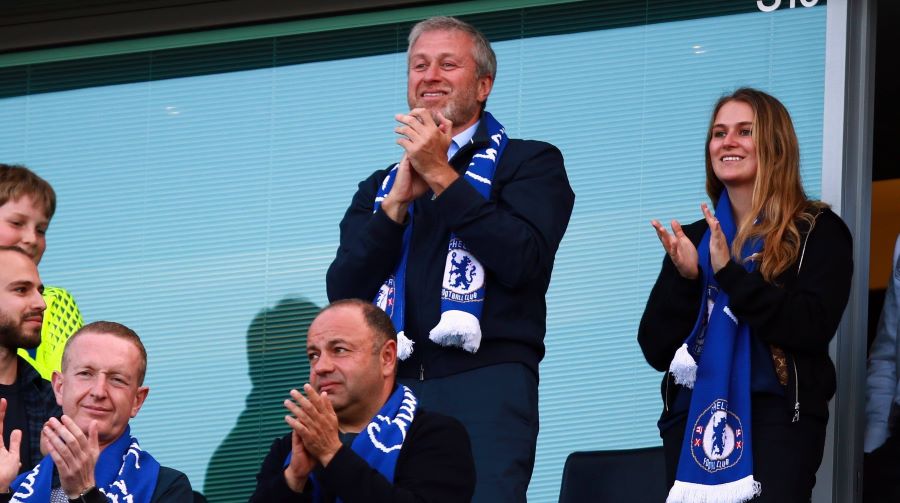 It is extraordinary that City’s encounter with Chelsea on Thursday is likely to be the last before the fall of the Roman empire.

The arrival in West London of Roman Arkadyevich Abramovich in June 2003 began the transformation of the Premier League into a rich men’s playground. English football has always been split into the haves and have-nots, but the then Governor of the Russian region of Chukotka ushered in the era of the have-yachts.

I had a close-up view of the advent of Abramovich. I think I might well have had a couple of brushes with his armed bodyguards. I certainly gained insights into the seismic shift he led in our game.

Now the founder member of English football’s billionaire cadre is dashing off in haste, leaving Chelsea to contemplate a future suddenly made unsure. Yet, sadly, the uncompetitive competition he leaves behind remains irrevocably wedded to wealth.

I find myself, like all Norwich fans, full of dread and despair watching my club being battered game after game by clubs whose owners have much, much deeper pockets than ours. It is utterly crushing being a City supporter right now. But waving goodbye to the Russian instigator provides a moment to take stock.

Ken Bates, the irascible, difficult, old whatsit who sold Chelsea became an unlikely ally to me a year before he struck the deal with Abramovich.

When I was an executive on the (London) Evening Standard, barely a week went by without him sending me a letter threatening legal action about something we’d published. Eventually I sent him a reply which said, merely: “Ken, stop being such a curmudgeon”. Apparently, he went around Stamford Bridge showing everyone my missive and laughing.

When I left the Standard, not entirely of my own volition, his secretary called me at my home, where I was sulking and worrying. “I’ve got the chairman for you,” she said, and so I waited to hear him gloating about my diminished circumstances. Instead, he said: “You’re going to find out who your friends are.”

And in the months that followed he kept inviting me to events, keeping me visible and “in the loop” as I began what was to become 20 good years of freelance writing and broadcasting.

So I saw, first hand, how building the swanky new West Stand at the Bridge pushed Chelsea close to the financial abyss. I saw the increasing desperation with which Bates looked around for ways of keeping the Blues out of the red.

That is the first important thing to understand about the Abramovich era as it ends: he bought Chelsea because they were financially distressed. He got a bargain because they weren’t really able to bargain.

The man who conducted the sale was Chelsea’s then chief executive Trevor Birch. He told me: “He won’t stop, you know. Abramovich won’t stop until he has made Chelsea the biggest club in the world.”

Birch was one of the first casualties of that quest. He went on to work with Bates at Leeds, then became the country’s foremost expert on saving clubs in administration. Now he’s chief executive of the Football League – where he must cope, daily, with the implications of the Premier League’s profound wealth.

Chelsea first won the title in their second season under Abramovich. They clinched the crown with a home win against Charlton, whose manager, Alan Curbishley told me that evening: “If I buy a player for a million pounds, and he flops, I lose my job. Chelsea can buy a £10m player, and if he doesn’t work out, they’re not bothered. That’s how they’ve changed things.”

In fact, they led a price inflation so that £10m became considered a pittance. And they stockpiled players, parking dozens at a time on loan around Europe (and, more recently, in our under-performing midfield).

For us, £10m remains a significant commitment. Yet it is not sufficient to buy a cert. The excitement about the crop of summer signings has wilted because only two them – Milot Raschica (who cost £9.4m) and Mathias Normann (who arrived on loan but won’t stay if we’re relegated) – look like the finished product in the world’s richest league.

It is so deflating and depressing watching the rest giving only glimpses of potential. And the abandonment of Farkeball only emphasises how our dreams have been dashed since the sublime summer of 2019. Promotion that May seamed a vindication of doing things properly: recruiting cleverly, keeping the books balanced, brilliant coaching, fabulous football.

But it was Daniel Farke himself who, this season, abandoned what Luddites called ‘the tippy-tappy stuff.’ Tim Krul had started hoofing the ball (usually straight out of play) before Dean Smith arrived. And defenders had begun thumping the ball forward in the forlorn hope of releasing Rashica. Instead, they mostly gift the ball to the opposition.

For the record, I understand why it had become necessary to attempt a complete reboot in November. But I shall always be glad that my wife and I were among those at Brentford who celebrated the season’s first Norwich win in the Premier League by feting Daniel at the final whistle – not know we were waving goodbye.

And, also for the record, if we again wave goodbye to the Premier League, nobody can say it is anything other than rotten failure.

So, of course, fans want to blame someone. That is the nature of being a football supporter. After every defeat at every club, you’ll find fans blaming a particular player, or the ref, or the playing formation … anything and anyone, but definitely someone. Because if you can convince yourself there’s an obvious, simple failing it must follow that there’s a simple solution.

Currently, the glib plan gaining traction with many (most?) fans is for Delia Smith and Michael Wynn-Jones to sell the club.

The question, “To whom?” is not being asked. Just tell them to sell! The self-funding model has failed, so, you know, get someone richer in.

But let’s look at Chelsea again. The best analysis I’ve read was in The Athletic, where a clutch of good journalists with good knowledge of Chelsea and the wider picture concluded that whoever buys the London club will have to be much less spendthrift than Abramovich.

Nobody is likely to come in and say: “Putting in about £1.7billion in less than 20 years? Yeah, that’s fine. Carry on.” There is likely to be a clear-out of players this summer as a new regime tries to bring costs under control.

Meanwhile, though, UEFA is predicting a 40 per cent increase in TV and commercial rights when the next round of deals is signed in 2024. That will mean big increased payments to the top clubs in our Premier League (who can already bank more than £100m in prize money alone from the Champions League).

There will be a growing disparity within the Premier League between those playing in Europe and those making up the EPL numbers.

For clubs like, say, Crystal Palace the most that they can realistically hope for is to stay in the area between 17 and eight or nine in the EPL. They have American investors and a substantially well-off chairman, but they must keep treading water in the middle to lower reaches of the division.

Or, consider Everton. Bill Kenwright listened to fed-up fans calling for a really rich owner and sold a controlling interest to Farhad Moshiri. He is definitely really rich: a bonafide billionaire. But it’s their turn to fight against relegation this season.

Or there’s Fulham. They have an American billionaire owner. They are currently romping to the Championship title. So they will yo-yo up again – but, as they have shown twice before, are no better at staying up than we are.

Or West Brom. Their billionaire owner is Chinese. They’ve also had a couple of recent yo-yo seasons. They’ll be lucky to finish in the top half of the Championship this season.

Or Stoke. Their owners, the Coates family, are blooming rolling in it … in the Championship.

Or Derby. Their owner, Mel Morris, is only half a billionaire, admittedly. But you can’t fault his ambition for the club. Unfortunately, you can fault his compliance with Football League rules. Derby County were docked points and have been in administration for five months.

Of course, there are clubs who, you could argue, have done well after, and because of, being sold to one or more wealthy “investors”. But define success. Is treading water like Palace success? And, if so, how certain are we that it won’t be Palace’s turn to go down in a few years’ time?

I haven’t even addressed the fact that there has not been a single credible approach for the club since Peter Cullum made an ill-thought-through bid in 2007. Not one. Despite our employing first Deloitte and then deal-broker Keith Harris to seek out potential purchasers.

Part of the issue is that when we owed £23m we weren’t a good buy. But since we cleared that debt, we haven’t been “distressed” … so now we’re a different type of bad buy.

I don’t know what the way ahead should be. Sorry.

I expect us to go down. I expect that it will be tough in the Championship next season. Stuart Webber has built three promotion-winning squads (the first was at Huddersfield) but the odds and history suggest a third quick promotion would be extremely unlikely.

But is the Norwich model really broken? Isn’t it football that is broken? And doesn’t that mean that “Delia out” is just noise?

Still, remember that song Chelsea fans sang about her? They can’t sing the first line now.