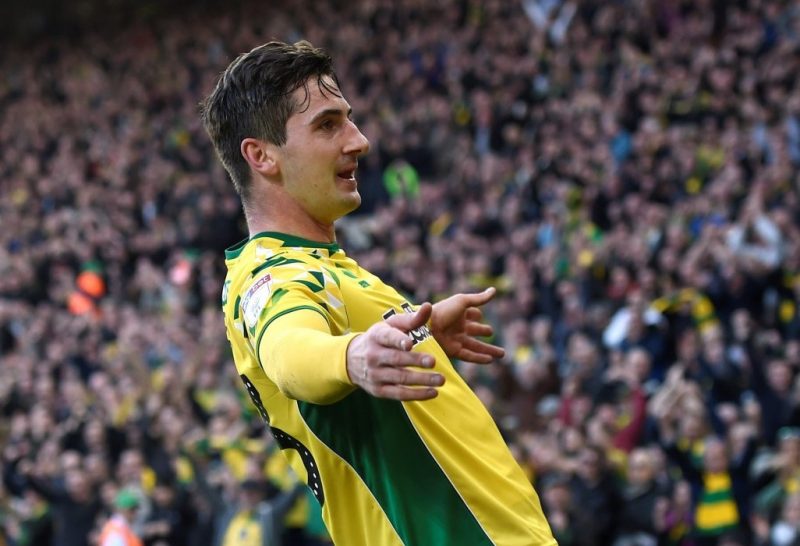 Another game. Another defeat.  Games to play are reducing. The Championship is waiting.

This was a game that City could have, should have had reasonable expectations of a point or 3 against a side on a poor run of form. Grant Hanley was missing with Covid with Gibson deputizing whilst Dean Smith elected for a midfield trio of Pierre Lees-Melou, Kenny McLean and Lukas Rupp.

From the very off, Leeds looked sharper, faster and more aggressive, snapping into tackles without giving the City players a moment on the ball.  Frequently the tackles were on the wrong side of the rules but for 20 minutes it seemed that Stuart Atwell had left his cards in the dressing room.

Rodrigo first fouled Lees-Melou with a stamp on his foot and then two minutes later cleaned out Brandon Williams with what should have been a clear yellow.  Williams was on the receiving end of some particularly brutal treatment, Forshaw next to go in studs showing onto the loanees ankle. Still nothing.

The net result was that the City midfield began to look almost afraid to receive the ball. Throughout the game, it was noticeable that the City players stood waiting for the ball to come to them when it was passed. Leeds made numerous interceptions and turnovers as a result.

When the players did get the ball, they rushed the passes meaning that although City shaded the possession in the opening third, they had little to show for it.

But then neither did Leeds. Apart from a corner, City had kept them largely at arm’s length until Leeds played a long ball forward. Bamford was up with Ben Gibson and Ozan Kabak chasing the ball but the Turk’s header was weak and fell to James. He rolled it into Rodrigo who hit a shot that hit Gibson’s back, deflecting it beyond the wrong-footed Tim Krul.

From the outset, it was obvious that Bamford was offside. Yet Mike Dean in Stockley Park deemed that he was not interfering with play, an utterly farcical decision.

So incensed were the Norwich technical team that referee Atwell finally remembered his yellow cards, brandishing it at goalkeeping coach Ed Wootten.

It is decisions like this that just make you think that the establishment will be only too glad to see the back of City in the Premier League so its place can go to a more lucrative opponent.

Leeds were lifted by the goal and began to cut through the City midfield with ease, and get around the fullbacks. Williams was caught several times losing possession in an advanced position exposing the flank to the quick United counter-thrusts.

On 27 minutes, another frankly baffling VAR review. Ayling slid in on Rashica. It was a hard, aggressive slide from a distance back. His studs were up, foot off the floor catching Milot Rashica just below the knee sending him rolling to the floor, albeit exaggerated as is the modern way.

Atwell showed a yellow but the tackle went to Stockley Park for review. Here in the US, the pundits were in no doubt that it was a straight red. It wasn’t given.

Meanwhile, Leeds were knocking on the door. Bamford shot over after Gibson dithered on the ball and Struik somehow blazed over from a few yards after a great Krul save. Most bizarrely of all, £17m man Rahpinha had the goal gaping but somehow he missed with his striking foot, hit it with his back foot only for the ball to hit his striking foot again.

Meanwhile, City huffed and puffed. Josh Sargent, for all his running, looked short of pace on the right.  Max Aarons made a few good runs, likewise Rashica, but time after time the final ball was woeful. At halftime, the only bright spot was that it was only 1-0.

Smith brought Mathias Normann on at halftime. Rupp had looked well out of his comfort zone in the first half but realistically, Smith could have withdrawn any of the three midfielders.

The result was that City looked marginally more composed in the middle of the pitch. Normann was fouled on the right and Rashica curled a wicked free-kick in between the defence and the keeper. It only needed a touch but through a crowd of players, somehow Leeds bustled it clear.

Shortly after, the ball was played to Rashica. He was stationary, waiting once again for the ball to reach him and inevitably was dispossessed by the onrushing Leeds players. The ball was hit long again, Krul was quickly off his line but when the ball was played back in he could do nothing to stop the goal. However, this time a clear off side was spotted and the effort disallowed.

On 60 minutes, Sargent made way for Jon Rowe, giving the youngster a decent spell to attempt to influence the game. It was the start of City’s best period of the game. Rowe first had a slightly weak shot saved, then another hit the bar – although there was an offside somewhere that would have ruled out a goal.

As a sidebar, Aarons and substitute Harrison had taken an instant dislike to each other. The Leeds man deeming it acceptable to push, shove and foul at every opportunity. Aarons was not to be bowed and gave back as good as he was given, the outcome being a yellow apiece over a period of 10 or 15 minutes.

On 75, City finally looked to have a change of luck. Good work on the right put Teemu Pukki through but good defending forced him wide before he could get a shot in. He pulled the ball back to Rashica. Again, Ayling slid in from a distance. Rashica went down and a penalty was awarded… however it went to review.

The replay showed that Ayling made contact with neither player nor ball, but that as Rashica ran, he trod on the outstretched leg and fell.

Mike Dean invited Atwell to the monitor to review the decision and it was reversed. On another day you may be reflective and say it could be awarded either way, but it just felt like another nail in the coffin for City.

Leeds then hit the crossbar from a free-kick and Harrison somehow escaped a second yellow after another tussle with Aarons. This seemed to prompt Smith to withdraw the full-back, bringing on Billy Gilmour and switching to three at the back.

And then it happened. Gibson played a great long ball forward to Pukki who played a first-time ball across the six-yard box where the onrushing McLean gleefully hit home to silence Elland Road.

It wasn’t quite for long though.

Another long ball forward. This time Gibson made a weak challenge and Raphinha was through.  Krul rushed out and drove him wide but he was able to cut the ball back for Gerhardt to slot home.

Wild chaos amongst the home support.

The final few minutes of added time were frantic. Krul went up for a corner, played a beautiful ball to Pukki but his shot was saved. As Krul stayed up, Leeds broke but could not take advantage of the vacant net.

And that was it.

City were second best in almost every department, the players looking jaded, shell shocked and well off the pace.  The introduction of Normann put a bit of bite back into the team in the second half but it took the introduction of Rowe to galvanise the team into serious action. Sargent looks some way off his best – surely Rowe must be a candidate to start in three weeks’ time?

This hasn’t quite reached Project Restart levels of dreadfulness, although that might be just the effect of having a crowd in the stadia. But it was dreadful nonetheless.

The only surprise is that City were only beaten by a solitary, illegitimate goal in the end.