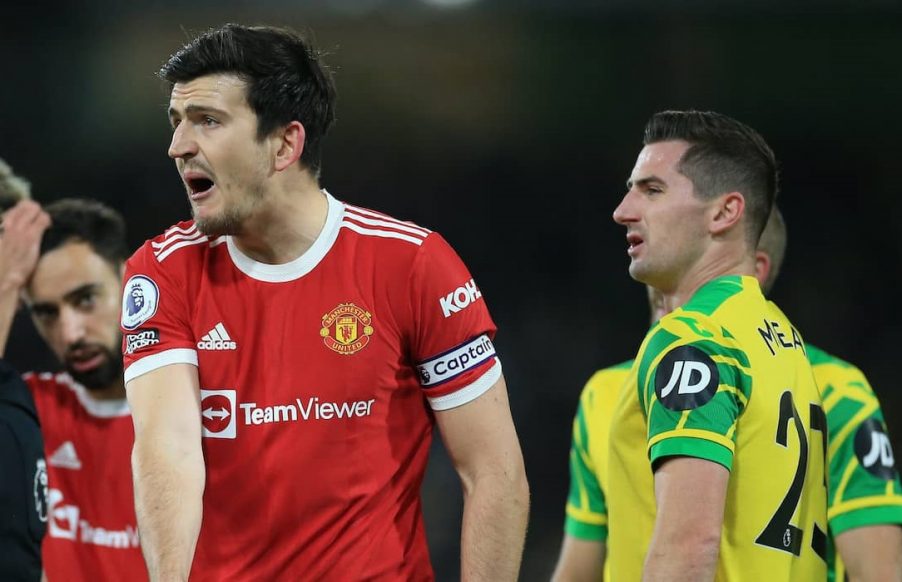 On Saturday, it’s the so-called Theatre of Dreams for City as we take our imaginary relegation battle to (don’t for god’s sake tell them) one of the world’s great sporting arenas.

In ‘celebration’ of that, we are revisiting one of Allan’s We Meet Again… classics, adapted in places to make it 2022-friendly.

This Saturday we head north to play arguably the world’s biggest club. From the Busby Babes to Charlton, Best and Law, the Class of ’92 and Sir Alex Ferguson’s dynasty, it is more than a football club, Whether we like it or not, United is a global sporting institution.

England’s first European Cup winners and the country’s most successful club domestically, they have a trophy haul most can only dream of, including 20 League titles and 12 FA Cups. And with a reported fan base exceeding 500 million, for a couple of hours this Saturday afternoon, the eyes of the world will be on Norwich City.

Such is the legacy of the Red Devils, for many supporters, games against the likes of Manchester United are the reward for City making it to the Premier League.

Our first meeting can be traced back to over a century ago. Previously Newton Heath, Manchester United was born in 1902 and so shares a birthday with Norwich. Three years later both meet in the 1905/06 FA Cup.

On that occasion, we lost 3-0 but since then there have been some unforgettable FA Cup encounters between the two.

Perhaps the most famous occurred in the third round of City’s legendary 1958/59 cup run to the semi-final. In the depths of a snowy winter, Norwich beat their illustrious opponents convincingly 3-0, the win coming just a year after the tragic events at Munich and the loss of many of the Manchester club’s staff that was felt so deeply across the football family.

A greater achievement, even compared to 1959 in my opinion, came in the 1966/67 FA Cup. This time there was only a gap of one division (City were then in Division Two) but this time City were away and facing football’s most famous trilogy – Bobby Charlton, George Best and Dennis Law.

It was a trio that would lead United to the title at the conclusion of the season and, a year later, the big one – the European Cup. Nobody, therefore, gave City a hope but with the goals coming from unlikely sources – Don Heath and Gordon Bolland – City shocked the football world to win 2-1.

What made that win all the more special was that it was United’s only defeat in 22 games.

There was further FA Cup Third-Round delight in 1990/91, a 2-1 win for City at Carrow Road – a result that, at the time, maintained a better FA Cup head-to-head versus the Red Devils. After United’s win in the 2019/20 quarter-final during Project Restart, that particular battle is tied at three wins each.

In the League Cup, we actually do hold the upper hand and are unbeaten against the Reds in that competition. Admittedly, we have only played them on three occasions but two of those clashes came in a semi-final, games that have since gone down in Canary folklore.

The year was 1975 and Norwich had progressed in the tournament beating Bolton, WBA, Sheffield United and, famously, Ipswich Town at Portman Road in the quarters. Drawing a team of Manchester United’s stature out of the hat is a special moment at any time let alone meeting them in a major cup semi-final.

It was a backs-to-the-wall effort in the first leg at Old Trafford, with the bonus of a last-minute Ted MacDougall equaliser to leave the door ajar at Carrow Road. It was an opportunity that City didn’t waste. On a memorable night under the Carrow Road lights, Colin Suggett scored the winner to send City on their way to Wembley.

That defeat of Man U was not as big a shock as some may imagine. United were in a period of transition and, only five years after being crowned Champions of Europe, were relegated, alongside City, at the end of the 1973/74 season.

Both bounced back at the first time of asking with Manchester United winning the 1974/75 Division Two title. City went up in third having won and drawn against the champions in the league, making it – in addition to the two cup games – four unbeaten that season against the Mancunians.

Where the 1970s witnessed triumph and trouble (United hooligans ran riot, in the worst trouble ever witnessed at Carrow Road, in the league match of 1977), the 1980s represented a period of Norwich dominance over their distinguished rivals.

There was a thrilling 3-3 in October 1983 when City came back from 0-3 down, but topping that was the first-ever victory at Old Trafford.

Kevin Drinkell’s winner on the 27th December 1986 marked an excellent end to the Christmas festivities. It had taken 16 attempts (and over 50 years) to leave Old Trafford with three points, yet in 1988/89 and 1989/90 Norwich were at it again winning 2-1 and then 2-0 to complete a famous away treble.

1986/87 was also the first season that Norwich finished above United (fifth and eleventh) and this trend continued in three out of four seasons in the mid to late 80s. In fact during those City ‘glory years’ United, under new boss, Alex Ferguson, would win just once in eight attempts against us.

The Canaries, between March 1988 and January 1990, won five consecutive Division One games against United.

Sir Alex Ferguson struggled in his early years, having to make do with mid-table finishes. It is often quoted that he was one game from the sack, but earned a reprieve after a Mark Robins goal brought him victory in the 1990 FA Cup third-round tie at Nottingham Forest.

Robins, of course, would go on to become a Canaries favourite and faced his former boss in two epic encounters as both clubs challenged for the first-ever Premier League title in 1992/93.

When Norwich arrived at Old Trafford on the 12th December 1992, they were an incredible eight points clear at the top. They narrowly lost 1-0, on what was Eric Cantona’s full home debut and it makes you wonder how that would have defined our season had we left Manchester with an 11-point gap.

United roared back that year. The return at Carrow Road on 5th April 1993 proved to be the day City’s Premier League dream died. United, in particular down the flanks, were unstoppable. Their 3-1 win that evening was the mark of the champions they eventually became – winning all six of their remaining fixtures to seal their first title in 26 years.

Norwich would taste one more victory over Sir Alex Ferguson. Another famous match in the club’s history; 9th April 2005.

Rio Ferdinand, Gary Neville and Paul Scholes all started, but after just 22 minutes, the one and only, Cristiano Ronaldo was thrown into the mix, followed later by Wayne Rooney and Ruud van Nistelrooy.

To put it into context, rock-bottom City’s 2-0 victory was a score-line to rival the 3-2 win over United’s now-illustrious neighbours in September 2019.

At last, a result to mirror those that we regularly dined on back in the 1980s.

There have been other highlights, with Anthony Pilkington’s header and Alex Tetley’s toe-poke both springing to mind, and such is the global brand that is Manchester United, any win, any game, is extra special.

Despite their current struggles, there is always an aura around the Red Devils and a trip to Old Trafford.

Whether Dean Smith can conjure one more special moment to add to those described above remains to be seen.

Also well worth a listen is the pod, Allan did with his mate, Val Tolhurst, where they look back at City v United games of yesteryear.

S to the E@CanaryEllis·
55m