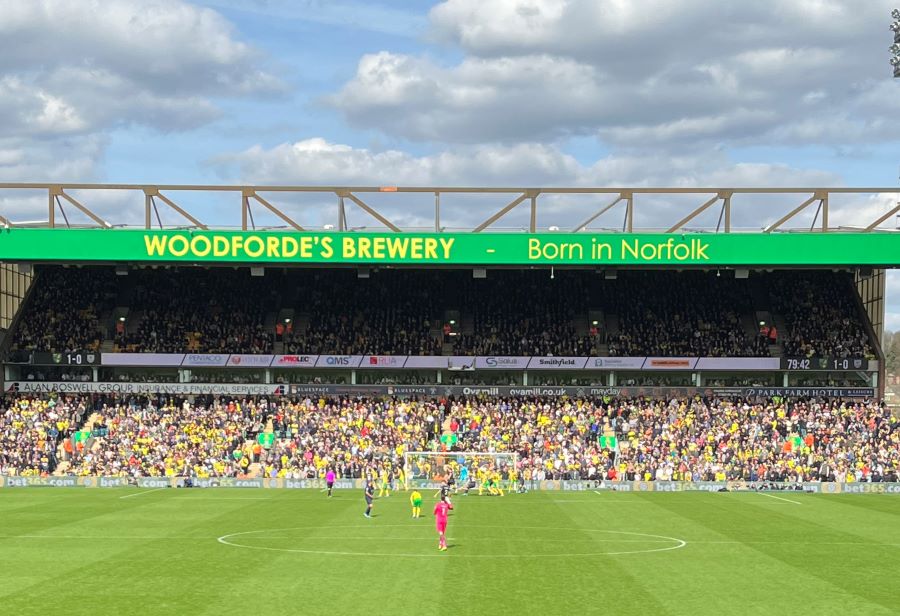 Carrow Road will take on an American theme tomorrow, but that isn’t the only thing that’ll feel foreign to Norwich City fans as Newcastle United visit NR1.

For the first time in a long time, there’s a sense of optimism around the club, after the Canaries’ last home game ended in victory. That sense is more a result of having nothing to lose than genuine hope of survival, but there’s at least a hint of excitement rather than the duty-bound trudges that were becoming routine on the way into the stadium.

On a day chosen to be Visit Tampa Bay’s ‘takeover’ – a range of Floridian activities are taking place including wings and ribs on the Yellows menu and pre-match pyrotechnics – one of the Premier League’s form teams arrives looking to extend their impressive recent run.

It’s an altogether different fixture to the last between these sides, when a Norwich galvanised by Dean Smith’s arrival were the favourites heading to St. James’ Park. Now, as they have for most games this season, City go in as underdogs.

They may have boosted their points total and goal difference in recent games but survival prospects still look very bleak for Smith’s side, and they head into the game eight points adrift with just 21 collected all season.

It looks highly likely that both clubs’ fates are sealed. If there was any doubt as to the home side’s survival status it was all but put to bed by Burnley last night, and the visitors have now reached that hallowed 40 points with five games to go and seven places clear of the relegation zone.

There is a little more at stake once the surface is scratched, however, and it’s mostly to do with career prospects for the respective players.

City’s dismal performance has inspired calls for a rebuild, while Newcastle’s recent takeover has left them with the funds to improve areas of their squad at will.

Smith’s players are on a mission to either prove that they should be key in the Championship promotion campaign next season or that they deserve a move elsewhere, while Eddie Howe’s squad are fighting to retain their spots as the Magpies map out which areas to improve upon.

As in the reverse fixture, Norwich will likely rely upon Teemu Pukki for goals, and the Finn has the extra incentive of matching Grant Holt’s tally for the club if he scores, as well as the confidence provided by the 12-month contract option taken up this week to keep him in Norfolk.

January signing Bruno Guimaraes has been the star man for the Magpies in recent weeks, scoring a double in a 2-1 victory over Leicester City last weekend before turning in another impressive performance against Crystal Palace on Wednesday.

That game against the Eagles does mean that Howe’s side will have travelled around 250 miles to play their second match in four days against the Canaries, a factor Smith’s physically-based side will look to take advantage of.

They’ll be without long-term absentees Adam Idah and Andrew Omobamidele but will likely have Kenny McLean available.

The Scot was forced off against Manchester United last weekend after suffering a small fracture in his toe, but has trained today and is expected to be involved.

Josh Sargent will miss out tomorrow but is scheduled to be back in the fold for next week’s trip to Aston Villa, while Lukas Rupp is also out for Newcastle’s visit thanks to an injury sustained in training.

Smith said ahead of the game: “[Newcastle’s] recent away record has been good as their home record. We played really well against Burnley and got our supporters behind us, and if we do that again we will give ourselves a chance.

“We still believe there is a chance to stay in the league and we have got to give it all to stay in this league.”

After a season of disappointment and frustration, it feels almost freeing for City fans to be heading into a game in which the result has very little consequence, although it’ll feel a lot better if the result is a positive one.