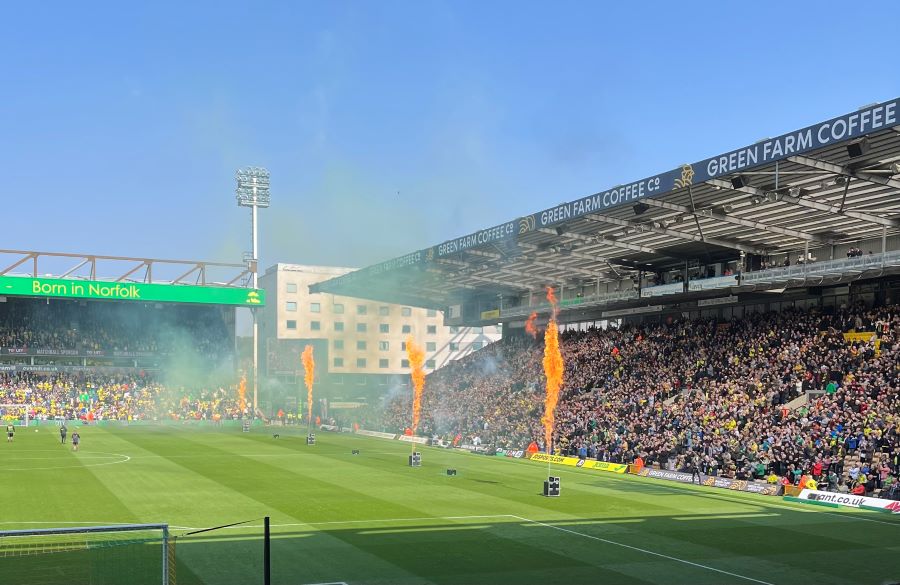 If ever there was a game between the financial David and Goliath of the Premier League then this was it.

A match-up of ethical ownership versus the morally corrupt. The haves and the have-nots. For those who crave change in the business model at Carrow Road, this was the perfect illustration of their reasoning. Newcastle United has bought its way to Premier League survival, and potentially upwards from there.

This is what we so wish we could do at Norwich.

Yet for much of the first half, it was the home team that looked the better side. Christoph Zimmerman replaced Ben Gibson in the back but it was an unchanged side otherwise.

City’s passing was crisp, they were quick into the tackle and largely controlled the midfield.  They also created more chances. Kieran Dowell had two good chances to score early on.

The first came from a long ball from Mathias Normannthat was blazed over the bar. The second following an interception and powerful run from Pierre Lees-Melou which put Teemu Pukki through. The Finn rounded the keeper but was forced wide. His eventual cut-back was slightly behind Dowell and the subsequent shot was over the bar.

Milot Rashica was also beneficiary of a great long ball, but as it dropped over his shoulder he couldn’t get near to make contact.

Newcastle had created some threat of their own too. The main threat seemed to be down the right flank with former academy player Jacob Murphy, making his first return to Carrow Road, proving a thorn in City’s side all match. The best chance came from an excellent near-post corner flicked across goal and inches wide.

Despite the odd scare, City were looking competitive but in attack, all too often Pukki was isolated. Lees-Melou continued his recent good form and Rashica was lively as ever, yet whenever City fashioned an opening, all too often the Finn was unsupported in the area.

And then, after 34 minutes, the game was over.

A long ball to the right found Murphy. Initially, Giannoulis mashalled him well but with an audacious backheel, then collecting the return ball, Murphy played a dangerous ball across the box. The otherwise excellent Sam Byram could only get a toe to it before the multi-million pound Joelinton curled a shot into the City net.

Right from the kick-off, the Newcastle players were visibly lifted. Sharper to the tackle, brighter on the ball. City were deflated as much as the visitors were lifted.

Passes all of a sudden were going to no one. Where players had been making themselves available for the ball, they were suddenly hiding. A second goal was inevitable and was not long in coming.

A long ball forward. Kenny McLean and Giannoulis were both the wrong side of their players – standing wide of them leaving them a clear passage. Murphy chased and won the ball, despite the efforts of the deceptively quick-over-the-ground Grant Hanley, and squared the ball for Joelinton to score his second.

City came out for the second half hoping to strike back as they had done so well against Manchester United. Instead, the usually reliable Tim Krul hit the same self-destruct button recently so well used by Ben Gibson.

Under almost no pressure, he played the ball straight into the path of another multi-million pound signing, Bruno Gumeirez. The Brazilian neatly chipped the ball back over Krul’s head to make it three.  Krul went on to atone for his error with some good saves as the half went on, but the damage was done.

Smith reacted by replacing Zimmerman and Normann with Jon Rowe and MaxAarons, Byram moving across to centre-back but these changes did nothing to make City more potent.

For the rest of the game, they were poor – looking every inch like a dispirited rabble resigned to relegation.

Rowe provided some moments of threat, but for each of those there was also a naive, perhaps over eager but unnecessary foul committed. Christos Tzolis replaced Rashica, but City by now were shapeless, toothless and hopeless.

The second half was a complete non-contest. At one stage Newcastle were able to stroke the ball about unchallenged for several minutes, accompanied by ‘ole’s from the visiting supporters. Finally, Mclean ended the torture by committing a foul.

All in all, a game that was a microcosm of City’s season.

Some flawed promise, too many mistakes, gifted goals, meek surrender and a complete failure to improve following substitutions.

Of the 11 on the pitch, perhaps only Hanley, Byram and Pukki can claim to have given 100% for 100% of the game. Krul, despite his gaffe, made some good saves. As for the rest?

Giannoulis looked threatening going forward but had one of those games defensively where he looks all at sea. Rashica huffed and puffed but produced little. McLean and Normann did well until the first goal.  After that, they were passengers. Dowell had City’s best chances yet at the same time managed to be ineffective, and Lees-Melou played well until the goal but his influence waned as those around him went into hiding.

There cannot be a single person inside Carrow Road who believed the rhetoric from Dean Smith about the slim survival hopes. All most wanted to see was a fight, a decent performance but after the first goal, they most certainly didn’t see that.

The taunts of the Newcastle fans only served to rub in the Gulf (sic) between the clubs. Yes, we are going back to the Championship. Yes, I want to see City backed to a level where they can make a fair stab at survival. But no, I don’t want to support a club funded by ‘dirty’ money or leveraged debt investment.

In the Premier League, there is only ever going to be one winner.