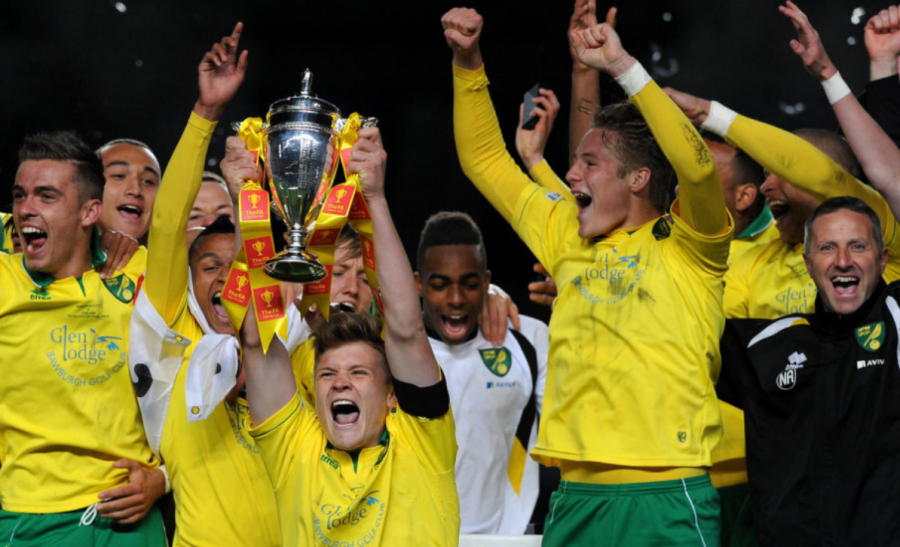 During one of the lockdowns, one of our regular guests, Alex Bain, had a look at the career progression, or otherwise, of our FA Youth Cup-winning team. With months and years having passed since that piece, Jamie Lauder updates us on where they are now.

The best part of a decade has passed since Norwich City’s Under-18 side beat Chelsea’s Under-18s to win only their second-ever FA Youth Cup. In this piece, I’ll be looking at the starting XI from the team that beat The Blues in the Stamford Bridge second leg.

William Britt spent the second half of the 2012-13 season on loan at Norwich from Southampton. During that time, he was a regular in the Under-18s and featured in both legs of the FA Youth Cup final. He remained in the Saints’ youth system until 2016, with loan moves out to Bognor Regis and Maidenhead, before spending a solitary season at Salisbury and announcing his retirement at 22.

Norwich-born Cameron Norman spent six years with City, including a loan move at Woking, before being released in 2016. He then spent two seasons in non-league with Needham Market, Concord Rangers and Norfolk neighbours, King’s Lynn Town, before earning a move to Oxford United. Since then, he’s made 112 EFL appearances for The Us, Walsall and Newport County – where he currently is.

Another Norwich-born player, Ben Wyatt, featured in the final and would go on to spend one more season in the City ranks before being released and moving to East-Anglian rivals, Ipswich Town. His time there was short, and Wyatt moved to Maldon and Tiptree before spending three seasons in the National League South with Braintree, St Albans and Concord Rangers. He now plays his football at Sutton United, where he won the fifth tier of English football last season.

Cameron McGeehan captained Norwich to victory in the 2012-13 final but didn’t make a first-team appearance for City. He had three loan moves before moving to Luton for a six-figure fee in 2015. Over the next five years, McGeehan floated around the Football League at Luton, Portsmouth, Scunthorpe and Barnsley, where he earned a move to Belgian top-division side, Oostende.

Republic of Ireland Under-21 international, Kyle Callan-McFadden, appeared once competitively for Norwich City’s first team, but was released at the end of the 2014-15 season and moved to Orlando City’s B team. He returned to his native country in 2016, and made 105 appearances for Sligo Rovers before coming back to Norfolk where he’s spent the last two seasons at King’s Lynn Town.

Harry Toffolo made 10 appearances for England’s youth teams while at City, and moved to Lincoln City in 2018. In his first season there, Toffolo was named in the League Two Team of the Year and earned a move to Huddersfield in 2020, where he still plays and is challenging for promotion to the Premier League.

Josh Murphy made the most first-team appearances for Norwich out of the FA Youth Cup-winning squad. He scored in his competitive debut against Watford in 2013 and stayed at the club until 2018 before being sold to Cardiff for an estimated £11m. He spent three seasons with The Bluebirds (one Premier League, two Championship) and has spent this season on loan at Preston North End.

Harry Randall was released by Norwich at the end of the 2013-14 season. The Northern Ireland Under-19 international then moved to Histon, before a move to Bishop Stortford. Unfortunately, this is all the internet has to say on the ex-Canary youngster.

Carlton Morris was the longest-staying Norwich player to feature in the 2013 FA Youth Cup final. He stayed on Norwich’s books until January 2021 but in that time had eight loan spells in England and Scotland. Amazingly, Morris was a Norwich player for 15 years but only managed one first-team appearance. He now plays for Barnsley in a Championship relegation battle.

Cameron King joined Norwich City’s academy at the age of eight. He never made a senior appearance for the Yellows but did represent Scotland’s Under-21s while at the club. Since leaving, King has played for Halifax Town, Shamrock Rovers and is currently at Kings Lynn.

Jacob played all of the final alongside his twin, Josh, and made 37 first-team appearances in the 2016-17 season. He then moved to Newcastle, following their Premier League promotion and has since made 88 EPL appearances on Tyneside.

Some notable mentions from the Chelsea side that day: