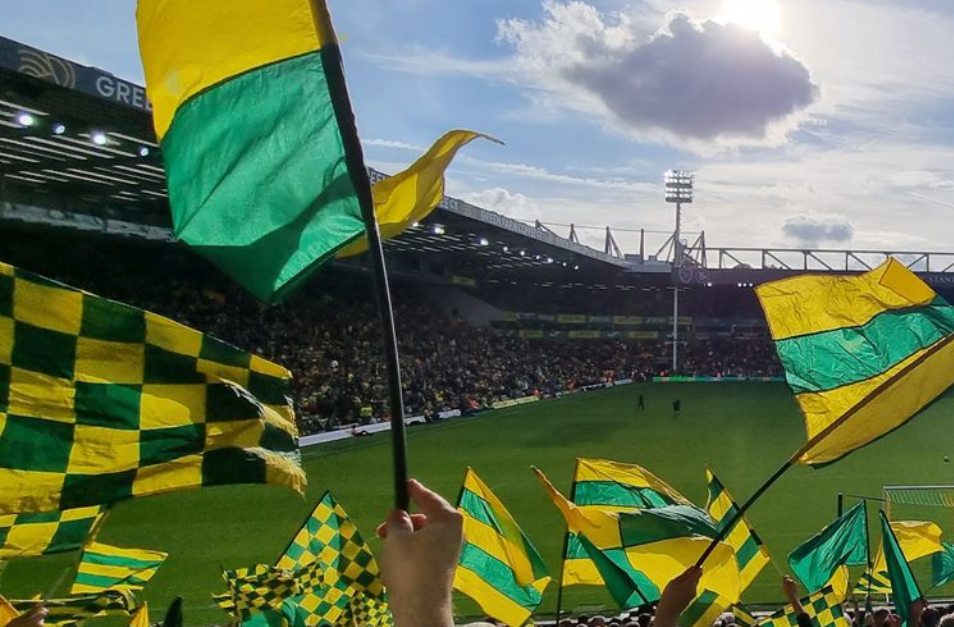 As fans, we are ‘football junkies’ and our drug of choice possesses potent mood-changing qualities.

Win, and all seems well with the world. Lose, and the misery hangs over us long after the final whistle, casting a dark shadow over those unfortunate enough to be in our presence.

Positive results on the pitch convince us that everything is rosy off it and can mask all manner of underlying issues. Whereas a season of perceived failure ensures a negative filter is applied across our view of everything.

As such, a club that appeared so united on the way to claiming another Championship title, now finds itself being labelled an abject embarrassment, despite not fundamentally changing course.

The following screenshot from my mobile was taken just before last Sunday’s kick-off.

Aside from the obvious cheap shot that even the WiFi performs badly at Carrow Road, it was the words ‘No Connection’ that seems particularly apt.

Because far from being miserable or angry at our current position, I actually feel very little.

It’s worth stating now that this article isn’t an attempt to fuel further division or provoke argument across an already fractured and fractious fanbase. It’s simply the reflections of a life-long City fan, who is currently so disconnected from the club that relegation barely elicited a reaction.

Whilst Dean Smith maintains he has seen no indication of apathy, had he been in the Cook household, rather than the away dugout at Villa Park, he would have all the evidence needed.

The sad reality is that I don’t currently feel invested in this squad of players or any of the people who are running the show.

That’s not to say that I blame Dean Smith. In fact, I quite like him.

But then again, I quite liked ‘John’ – the guy who directed me to the paint aisle in B&Q the other day; my impression of both limited to little more than ‘he seems like a pleasant enough chap’.

In fairness, Dean has been facing an uphill battle for my affections since he arrived, for three main reasons.

Firstly, in most interviews, he’s had to focus on why his team was rubbish, which is hardly motivational.

Secondly, his team is rubbish. Or rather, it has been made to look so against the calibre of opposition it’s currently facing.

Few would argue that Farke’s record this season did not warrant the sack. The lack of points and a clear gameplan was only going to end one way. And yet when the decision was made, the overwhelming sense was one of regret rather than relief.

The German had cultivated a close bond with the fans, that went beyond the results his team delivered. A connection that was formed on his post-match laps of the pitch, as he orchestrated a chorus of oles and a place in our hearts along with it.

If one player exemplified everything that was good about the Farke era, it was Emi. A cut-price diamond who combined outrageous talent with a fiercely competitive streak, and who wore his heart on his sleeve which showed that he genuinely cared.

His departure last summer left a hero-sized (five foot seven) hole in both the squad and our affections.

The heir to the throne was meant to be one of own. And yet, with a Premier League platform set, the ‘best thing’ to come out of Dereham since the A47 made a complete hash of it and was ultimately packed off to the South coast.

Todd Cantwell has struggled to win over the fans. For some it’s the languid playing style. For others it’s the way he chooses to express himself on social media. I’ve even heard people object to the Alice bands and an accent that is more ‘Brixton Mandem’ than deepest Norfolk. Personally, I always felt that despite progressing through the ranks, he considers himself too good for the club that nurtured him.

But ultimately, in the hunt for a hero, we’ve had only howlers. The players apparently taking it in turns to rule themselves out of the running for the Barry Butler.

The lockdown had an impact. It deprived the squad and the fans of the chance to connect during what was a phenomenal season. There is little doubt that all those in the title-winning side would have been given more leeway through their current problems had we been there to share in their previous triumphs.

Take Kenny McLean. A man who was embraced as a legend for stumbling drunk onto the City Hall balcony, whilst ringing the Lord mayor’s bell at a promotion party.

That legendary status becomes short-lived when the only clanger on show is a mis-hit pass that gives the ball away.

It’s not just the players but all those running the club that have fallen foul of the changing mood.

Aside from going public on his outside interests, Stuart Webber hasn’t actually changed. He’s still the bullish, outspoken figurehead and mastermind behind two promotion campaigns. But whilst we loved his forthright approach when we were successful, we now find it offensive.

So too the owners, who are treated like family members when we’re winning and the root of all evil when we’re not.

But back to the point of this article and my sense of detachment.

My wife would like to believe that I’ve finally achieved a healthy sense of perspective. An acceptance that it’s ‘only football’ and insignificant compared to everything else going on in the world.

In reality, it’s a defence mechanism. I don’t want my weekends ruined by a football result, or to find myself embroiled in angry exchanges with anyone connected to the club. And what better way to shield yourself from negativity than to create distance from it?

If I believed it was a temporary downturn in fortunes, I’d weather the storm, as I have countless times before. But deep down, I suspect that ‘this is us’ for the foreseeable future, and the empty stands that greeted Sunday’s final whistle, suggests I’m not alone.

Asking Dean Smith to face the media and repeatedly assure us that the players are working hard and that the majority of people are supportive, isn’t enough to inspire any confidence, based on what we’re seeing each week.

And the lack of inspiration, leads to disillusion and ultimately to detachment.

There may be some who think good riddance, but that relies on, and assumes that, there are queues of people ready to replace the disenchanted.

If there aren’t, then it’s a problem that the club desperately needs to address.

Because without the riches of the Premier League or a wealthy investor willing to prop up its finances, a self-funding club is hugely reliant on the income it generates from the fans.

The club has lost the Premier League money. There’s a danger that it’s losing the fans too.