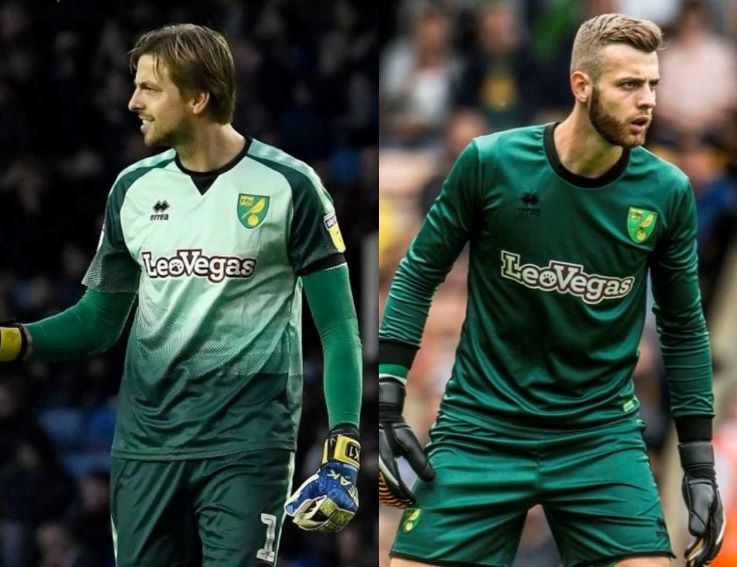 Tim Krul and Angus Gunn are both exceptional goalkeepers.

One has made over 220 Premier League appearances and is a two-time Championship winner with City. The other has only played just a single season as a number 1, finishing midtable in the Championship in Daniel Farke’s maiden campaign.

On paper, there seems to be a clear winner, but over recent weeks, some debate has risen, pondering who should be City’s starting goalkeeper for next season.

Obviously, this discussion becomes quickly irrelevant if either is transferred over the coming months, but let’s assume for now that as we begin next season, both goalkeepers are still here.

Like most Norwich fans, I have a preferred starter and in this article, I’ll attempt to explain who and why.

Krul has been exceptional for Norwich since joining on a free transfer from Brighton in 2018. The Dutchman has been the main goalkeeper through two promotion-winning seasons and won Player of the Season in 2020, following City’s relegation from the top flight.

This season has been different though. Despite some good games, it’s clear that Krul hasn’t played to the standard he’s set for himself in yellow and green.

It’s also unknown whether Tim will want to spend another year in the Championship, especially as a backup, given that the Netherlands have qualified for this winter’s World Cup in Qatar and he has been heavily involved in the Dutch squad over recent international breaks.

However, I’m doubtful teams if too many teams in England, will be looking at Tim as an option as in his last few Norwich games, he’s not been playing at his usual level. If a move was on the cards, I anticipate it would be to a team elsewhere in Europe.

You might not be surprised to hear that this is one of Krul’s worst seasons, looking at the average number of goals conceded per game – 2.03 – beating the 1.88 from two seasons ago in the top flight.

It is worth remembering however that sandwiched between those two relegation seasons were two very good Championship campaigns. Last season, he kept 18 clean sheets in 36 games last year (albeit aided by the back four of Giannoulis, Gibson, Hanley and Aarons) and found himself in the WhoScored.com Championship Team of The Season.

Many were calling for Angus to re-sign in the summer of 2018, prior to Tim Krul’s arrival.

He had performed well in the season prior, and was wanted by a handful of clubs in the Premier League. One of those, Southampton, bought him for a reported £10 million, and he impressed on several occasions for the Saints, ending 2018-19 as their number 1, and playing a role at the start of the 2019-20 season.

Unfortunately, during his second season in the Premier League things started going downhill for the young Scot. He conceded an average of 2.5 goals a game after 10 games, and wouldn’t play for Southampton again – his last game being the infamous 9-0 defeat against Leicester City.

A loan move to Stoke, where he played against Norwich in a 4-1 defeat, followed before getting the move back to his boyhood club.

In his 11 games for City this season, he’s managed two clean sheets and, despite having a poor start against Crystal Palace and Arsenal, he’s been solid.

The win against Watford springs to mind as one of his best performances, with good games against Palace at home, Wolves and Leicester – despite the three-goal defeat – in the mix too.

Gunn’s lack of top-flight experience is one major reason to oppose him being Norwich’s starting goalkeeper as he only has one full season of senior experience (2017-18) and doesn’t have a positive reputation in the Premier League.

Additionally, I don’t think it’d make sense for Angus Gunn to sit on the bench for a Championship team next year. He’s still young for a goalkeeper, and being a backup keeper in the Championship would be a massive step backward in his career.

Despite this, Angus is a Norwich fan. I don’t think he’d want to leave the club where his name means so much, and the club he’s grown up supporting.

While there are compelling arguments for both Angus and Tim to be the starter, my pick would be the former.

He was brought in with the intention of being Tim’s replacement, and I think a full season in the Championship would be perfect for his development and for him to cement himself in as the main goalkeeper for City.

While I would love Krul to stay at the club, I’m not sure he will unless assurances are made that he can prove himself to Louis Van Gaal and the Netherlands camp. The World Cup has to be his priority going into next season, and he can’t prove himself if Angus is the number one.

I do still believe Tim’s experience and standing in the dressing room will be vital next season, so if there’s any way to negotiate his staying, I would be over the moon to see it happen.

The main take, though, is that City have two top goalkeepers, and whichever is the main man next season, I’m confident they can play a full part in any promotion push.