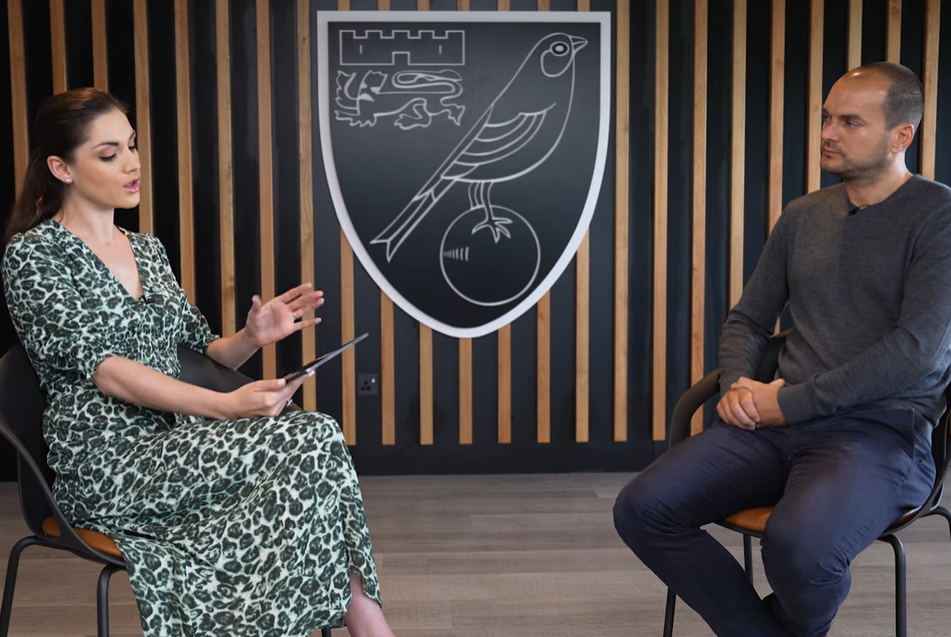 Unlike the official local media (Archant, local BBC and ITV, The Athletic), MFW doesn’t have any form of regular access to the club. And that’s absolutely fine – we know our place. So I’m definitely not getting the hump because we were unable to quiz Stuart Webber over the season that’s just ended.

That’s not our role.

But, over the last three seasons, along with Along Come Norwich and Talk Norwich City, we have been lucky enough to be granted access to a limited number of players and officials to interview across each season.

It’s why we’ve been able to interview the likes of Daniel Farke’s assistant Eddie Riemer and Andrew Omobamidele.

It’s not always been possible, despite our best efforts, to draw down our full quota of interviews each season given where we sit on the club’s list of priorities – and I get that – but we’ve usually ended up with something for which we’ve been very grateful. It’s a level of access most other clubs don’t offer fan sites.

Premier League seasons, by their very nature, are of a different level media-wise for the club, so although our request in January to interview Craig Shakespeare was initially met with the club’s approval, I guess it was no surprise that there was no available window for that interview to take place in.

Disappointing, but not surprising.

For the lads at Archant, Michael Bailey and the local BBC and ITV channels, however, the lack of formal access for end-of-season interviews etc represents a rather bigger challenge and is why it was disappointing for them to learn that Stuart Webber’s only post-season interview is to be the one now available on the club’s own YouTube channel.

If you don’t have 33 minutes to spare, let me try and precis what our sporting director had to say in his usual authoritative and forthright manner in conversation with Alice Piper.

The first thing to say is, this Stuart Webber is the one we have come to recognise and isn’t the one who came across in the now infamous Henry Winter interview as half-@rsed and not fully committed to either his role in the club or the club itself.

This, whether or not we agreed with and liked what he said, was the Webber who still appears to have a clear plan in his head over where this club should be heading and how it should be achieved.

Where, for me, it started to fall down was where, Johnson-like, he appeared initially willing to take the blame for the disastrous season before listing many other factors, all outside of his control, that he deemed the root causes.

Among those mentioned were the fans and local media.

“The start of the season, the whole area disappeared. The fans gave up quickly, the local media went after us quickly and we thought it became tough to turn this around.“

To bring the fans into it seemed, to me, a misjudgment, especially as he also took time to laud the loyalty of those same fans later on in the interview.

We’re here, Stuart. We’re *always* here if we’re given something to get behind. The problem this season has been that more often than not there’s been nothing there to throw our weight and voices behind.

To rally against the fans, to see them as the enemy, rarely ends well.

And I’m not sure the local media ‘went after’ the club in the way he infers. Many of the big names in said local media are City fans and are willing the club to do well, but when there is little positivity to report on, it’s inevitable that things get written and said that question the decision-making both on and off the pitch.

Rather than going after the club, it feels more as though the local media were doing their job.

There were of course questions that needed asking in this interview but weren’t because of the in-house nature of it although, in the circumstances, Alice Piper did a decent job.

One of those questions was around funding or lack thereof.

Webber agreed that the money spent last summer was spread too thinly and failed in its goal of adding additional quality to the squad while also ticking the ‘future value’ box.

While it wasn’t a follow-up question Alice was ever going to ask, it would have been the ideal time to seek his view on whether or not a self-funding model can support a Premier League team or, at the very least, allow it to survive beyond a single season.

It was badly missing a Paddy Davitt or a Chris Goreham, who’d have been in a position to dig deeper.

The club’s decision to pull up the drawbridges and hunker down was made even more questionable when Webber reiterated his belief in the community ethos espoused by the club – a club that understands its role in the community and which is determined to plonk itself in the very heart of it.

To say that and then refuse to speak to the local media while also digging at the fans for giving up too soon was one heck of a juxtaposition.

But, to be fair, he also still did that Stuart Webber thing of managing to convince us that there is enough good stuff going on that there will, in the future, be a football club to be proud of.

He did though try and downplay the number of supporters who are desperately unhappy with the current state of the club and cited ‘a few blokes holding a bedsheet’ as the extent of the anger and discontent.

He also took the fact that the season tickets have again sold out as a sign that most are happy enough, citing that the price rise and relegation were perfect ‘outs’ for those who were genuinely unhappy.

But I don’t believe that’s right.

There are plenty who are unwilling to take to the bedsheets and Carrow Road protests but still unhappy with the overall direction of travel, while also wanting to support the club.

But, at least he has spoken. Many cited the sound of silence emanating from Carrow Road since the end of the season and now that silence has been broken. We can’t have it both ways.

He also made a fair point when describing his transparency and openness, and how most sporting directors say either very little publicly, or nothing at all. And he’s right.

The honesty remains refreshing and I guess there was nothing he could have said that wouldn’t have been pored over and dissected on Twitter and by people like me.

I just hope that in the next few weeks, common sense prevails and a thaw sets in which will restore the once-healthy relationship between club and local media. If they persist, situations like this rarely end well.

As for MFW, I suspect our heyday of interviewing management and players may be over, but we can live with that. It was nice while it lasted.