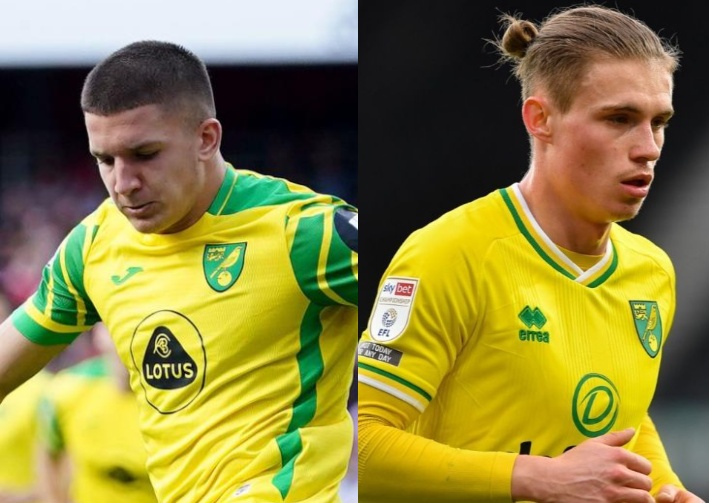 It’s been a slow-burner of a summer for City fans, but with some of the squad reporting back for duty yesterday, or for fitness testing to be more precise, we should expect some moving and shaking in the next few weeks.

I’m not sure whether Christos Tzolis or Przemyslaw Placheta were among the early arrivals – I suspect not – but both have been mentioned in despatches in the last 24 hours and not because they’re about to be rewarded with new, improved contracts.

For Tzolis, it appears his time here is up.

A move that happened amidst a flurry of flight trackers, fanfares, high hopes and some unusually warm words from Daniel Farke, looks like it could end with a minimum of fuss as he sidles out of the side door in the direction of Brugge.

It would be an undignified end to a City career that never really began, even though the signs were super-promising after that 6-0 spanking of Bournemouth Reserves in the Carabao Cup.

While he may have terrorized the Bournemouth right-back that evening and chipped in with an impressive two goals and two assists, that was pretty much it. There would be no bounce.

The shot of adrenalin afforded him by that heady night last August fizzled away quicker than you could say ‘non-designated penalty taker’.

His tame penalty against Liverpool in the next round of the Carabao was a crime in itself but was made worse by the fact he had wrestled the ball off Adam Idah – aka the designated penalty taker.

He was rightfully taken to task by Farke for such an unprofessional act, and publicly so, but while the head coach appeared keen to eventually move on, Tzolis was never able.

A few underwhelming cameo appearances and, one assumes, some equally underwhelming showings on the training fields of Colney were never going to be enough to get him close to a place in the starting XI.

In Michael Bailey’s piece in today’s The Athletic, there is a suggestion the player – still only a young man – lacked the footballing maturity needed, although there must be a little more to it if the club is unwilling to persevere with a player Farke described as “one of the most exciting offensive players across European football”.

Unsurprisingly, there are clubs out there – mainly on the continent it seems – who are willing to take a chance on Tzolis and who think they can tap into that much-hyped talent.

The Club, while knowing that making a profit on their outlay is out of the question, will be looking to recoup most if not all of that undisclosed fee, thought to be around £8.8 million. With Brugge appearing willing to make it a permanent deal, that would raise some much-needed cash and would hopefully enable Dean Smith to add to the solitary loan signing of Isaac Hayden.

The other, least palatable option, would be a season-long loan with an obligation to buy at the end of the term.

What does look certain is that we’ll not see Tzolis in a City shirt again.

Whether the same can be said of Przemyslaw Placheta remains to be seen. A piece in today’s Pink’Un by our own Sam Seaman suggests that Birmingham City may be looking at the Pole to fill the void left by the returning Onel Hernandez.

Other Championship clubs, as well as some on the continent, are reported by a Polish news agency to also be looking at the player who we signed as a speed merchant but who, like Tzolis, has delivered very little (and not very much speed).

Interestingly, Placheta did get some Premier League action last season – more than his very limited output deserved in truth – and sometimes at the expense of Tzolis, who was several steps behind the Pole in the pecking order of City wide men.

His 12 PL appearances produced little by way of chances or assists and his only goal in a City shirt came early in his time here when scored in a 2–2 draw against Alex Neil’s Preston North End in September 2020.

Other than a couple of clipped sprints, which convinced us all he was Usain Bolt in a football shirt, we have seen hardly anything of his much-talked-about pace, and often his first touch and all-around awareness have denied him the chance to use it.

If he stays, I guess he’ll be part of Dean Smith’s squad and, in fairness, Smith appeared to have more faith in him than most fans last season but, equally, if he starts on a regular basis then it will be a sign all is not well. A team destined for a top-two finish won’t have Placheta in it.

But he’s wholehearted, appears to be a decent guy, and always puts in a shift when called upon. If he goes, it’ll just be another gamble on a relatively modest outlay that didn’t work out.

In terms of incomings, it’s all very quiet right now, presumably, because we need to generate some cash before we can buy, but expect a little online frothing today following news that MK Don’s Scott Twine – a player some City fans would like to have seen at Carrow Road – is about to sign for Burnley for £4 million.

In reality, we have no idea whether or not he was on the club’s radar but he is one who, on the face of it, looked like he’d have been a decent fit here.

At the moment it appears Isaac Hayden is going to be doing a lot of heavy lifting but it is, of course, very early days.