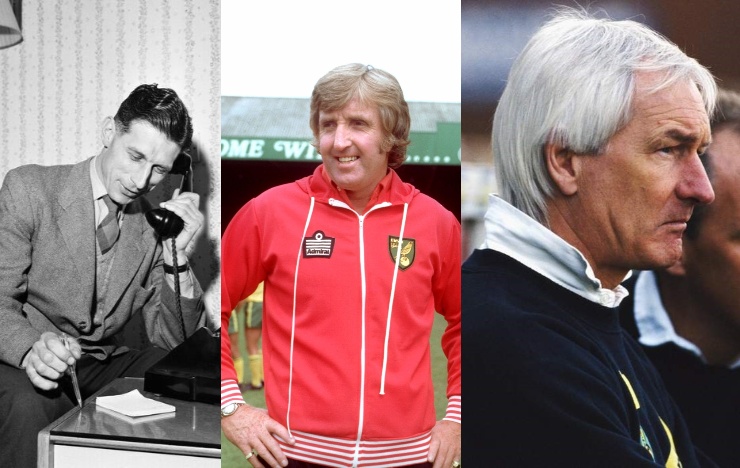 As Dean Smith begins his first full season in charge at Norwich City, MFW regular Alex Bain thought this would be a fine time to cast his eye over all the managers he can personally recall at Carrow Road, a journey which recollects some 60 years! ***

So, take it from the top, Alex.

George Swindin: 1962. 20 games and a 50% win rate. He had lost his previous manager’s job at Arsenal as their Chairman wasn’t happy due to Spurs’ Double that season.

Lol Morgan: 1966-69. 127 games and a 35.4% win rate. After a playing career at Huddersfield and Rotherham, he became player/manager at Darlington before replacing Ashman.

The next season back in the top flight saw Brown lead his side to fifth place, then Norwich’s highest ever final position. They even topped the League during the first half of the season and proved to be the hardest side to beat in the First Division alongside champions Everton. [Ken is a proper gent in real life – sub-editor Martin P]

Dave Stringer: 1987-92. 229 games and a 38.9% win rate. He saved Norwich from relegation in 1987, and in his first full season of 1988–89 Norwich emerged as an unlikely contender for the League title and FA Cup. We finished fourth in the league and reached the semi-finals of the FA Cup. Norwich reached another FA Cup semi-final in 1992 and narrowly avoided relegation that season.

Mike Walker: 1992-94. 80 games with a healthy 45% win rate. He gave Norwich their highest-ever league finish in the new FA Premier League where they finished third and qualified for the 1993-94 UEFA Cup – the first time they had qualified for European competition and achieved that famous two-legged win against Bayern Munich. [Another nice guy with always time for a quick friendly word – Martin].

John Deehan: 1994-95. 58 games and a 22.4% win rate. Deehan stepped down as manager and handed the reins to his assistant Gary Megson but City were still relegated.

Martin O’Neill: 1995. 26 games with a 46% win rate. O’Neill became manager of Norwich City in June 1995 and left the club in December due to differences with club chairman Robert Chase over the denied signing of striker Dean Windass.

Gary Megson: 1995-96. 27 games and a record low of an 18.5% win rate. Took over following the departure of Martin O’Neill to Leicester City. Norwich finished 15th in Division One that season and Megson then left the club as Mike Walker returned as manager.

Mike Walker reprised: 1996-98. 98 games with a 32.4% win rate. After two years and no promotion, he was relieved of his position. [Not without some behind-the-scenes controversy – Martin].

Nigel Worthington: 2000-06. 280 games and a 40.8% win rate. Made the 2002 First Division play-off Final, but City lost to Birmingham City in a penalty shoot-out. 2004: Second Division champions but relegated after a single season.

In his third full season in charge, 2003-04, Worthington took Norwich into the Premier League after winning the First Division with a club record 94 points. With one match remaining in 2004-05, Norwich were one point above the relegation zone but after a 6-0 defeat at  Fulham, were relegated.

Peter Grant: 2006-07. 53 games with a 34% win rate. Known as “Peter the Pointer”, Grant was never really popular with the Carrow Road faithful and failed to last the season out. A loss to the boys down the A140 didn’t help his cause.

Glenn Roeder: 2007-09. 65 games and a 30% win rate. He saved City from relegation in his first season but was sacked after losing to Charlton. [Not one to endear himself to the supporters, particularly at an infamous AGM – Martin].

Bryan Gunn: 2009. 21 games with a 28.6% win rate. Gunny saw us relegated to League One. Gunn was influenced in his management philosophy by Mike Walker. Himself a former goalkeeper, Walker believed – contrary to popular opinion – that goalkeepers can make good managers because their excellent view of the game enables them to develop a good tactical awareness. Whoops!

Following Norwich’s survival in the Premier League in the 2011-12 season, Lambert offered his resignation on 31 May 2012, but the club rejected it. [That didn’t stop him quitting for Villa, ironically in the last game of the season when their fans were singing only one Paul Lambert as well as ourselves – Martin].

On 6 April 2014, Norwich announced they had “parted company” with Hughton with immediate effect. At the time of his departure, Norwich were 17th in the Premier League, one place and five points above the relegation zone.

Alex Neil: 2015-17. 108 games with a respectable 41.7% win rate. In 2015 City were play-off winners against Middlesbrough at Wembley and promoted to the PL, but relegated after one season. Neil was dismissed after a poor run in the EFL Championship.

Daniel Farke: 2017-21. 193 games and a 43.5% win rate. Establishing us as a yo-yo club, nobody needs to be reminded of the timescale of his achievements, disappointments and huge displays of dignity in the face of adversity.

On 6 November last year, the day his team recorded their first league win of the season with a 2-1 away victory over Brentford, Farke was sacked after the game and replaced by former Aston Villa head coach Dean Smith on 15 November 2021. [Some of us have lived to regret Daniel’s departure even now – Martin].