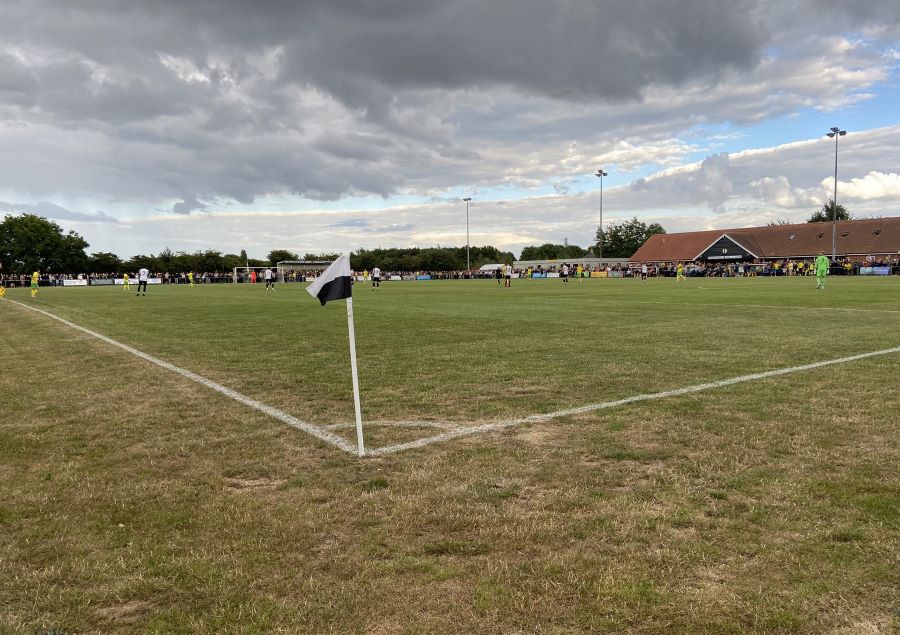 Our pre-season friendly against Dereham Town at Aldiss Park on Friday evening gave Canary fans the chance to see our players [very many of them as there were 22 on display] in action for the first time for a couple of moons, and from what I can gather the 3,000 or so who attended thoroughly enjoyed themselves on the night.

There was no first sighting of Isaac Hayden but there was the opportunity to see Todd Cantwell back in a Yellow shirt*** and a friend who went said TC seemed to be in good spirits. He added that a “back in the fold” match couldn’t have taken place at a better venue for local lad Todd, with the caveat that this is still early days in the rehabilitation process.

Speaking after the game Magpies manager Adam Gusterson was gracious in extremis when he said:

‘What I‘d say about Norwich is their self-awareness to us as a club was exemplary. They knew what this game meant to us as a football club as well. They were a class act on and off the pitch. To have this game sets us up so well for this season.

‘That’s probably a good portion of our budget for the entire season in one night. You have to capitalise and I think we have. The way they’ve approached it, they’ve played obviously good first-team players, which again has attracted people to come here. I’m just so thankful to them and how they’ve been.‘

That equates to roughly 3,000 people at a tenner a time which means Dereham Town must have realised something north of £20k [allowing for some junior tickets] which is an awful lot of money for them. Anything they made from hospitality might even push that figure closer to £30k of course. And without the slightest hint of appearing patronising, that is a lot of money to them.

This takes me back to my first meaningful gig in journalism, when I paid for my juvenile sins by becoming sports editor of the Harlow Gazette at the ripe old age of 22 and the non-league world became mine too for a couple of years.

Unlike some young bucks of today, I was not catapulted into the world of Premier League or even EFL Championship football. Harlow Town and Bishops Stortford were my working environment at that time and thanks to an old friend and Harlow Town director back in the day I got an early insight into how finance worked in the seventh tier of English football.

The gentleman in question, Alan Howick, helped out MFW with our Brighton previews last season. While he naturally didn’t go into too much specific detail way back then he gave me the general picture. Hand to mouth wasn’t in it.

I must have brought both those Essex clubs a bit of luck as Harlow went on an incredible FA Cup run that saw them beat both Southend United and Leicester City [yes, that Leicester City] after replays before going out to Watford 4-3 in an awesome game that could have seen them equalise at the death.

The following year Stortford won the FA Trophy at Wembley [yes, that Wembley] by beating Sutton United 1-0 in an unattractive but mesmerising game featuring one John Radford of Arsenal fame. Stortford became his final club after a long and illustrious career.

During the course of these two seasons, I was in the press boxes at Roots Hall, Filbert Street, Vicarage Road and even the old Wembley itself. No smartphones, no internet, just a pen and a notebook. As the Gazette was a local weekly I didn’t use the telephone for copytaking like everybody else although I might have made a sneaky free call to my girlfriend of the time.

I got interviews with John Motson, Graham Taylor, John Radford and spoke with some of the MotD crew during this period which was a source of great pleasure for a young journo. Just Martin’s luck I guess as neither Harlow or Stortford have never achieved anything significant either before or since.

Those clubs nowhere near the apex of the pyramid have so much to offer. Looking back I contrived to develop a career out of the unexpected on-field heroics of two of them.

So it’s worth reflecting on the good that Norwich City have done by staging pre-season matches with the likes of Dereham Town, Kings Lynn and so many others over the years and always fielding a few household names to ensure a decent home turnout, declining any gate receipts and giving something back to the wider football community.

Adam Gusterson was delighted by the gesture and I’m pretty sure those at the helm of Dereham Town will be too.

£20k might only be just over a day’s worth of Mo Salah’s wages on his new deal at Liverpool but somewhere along the A47 it will mean an awful lot.

***We cannot all be wrong. The new home shirt is an absolute belter.

This sign-off seems quite appropriate: