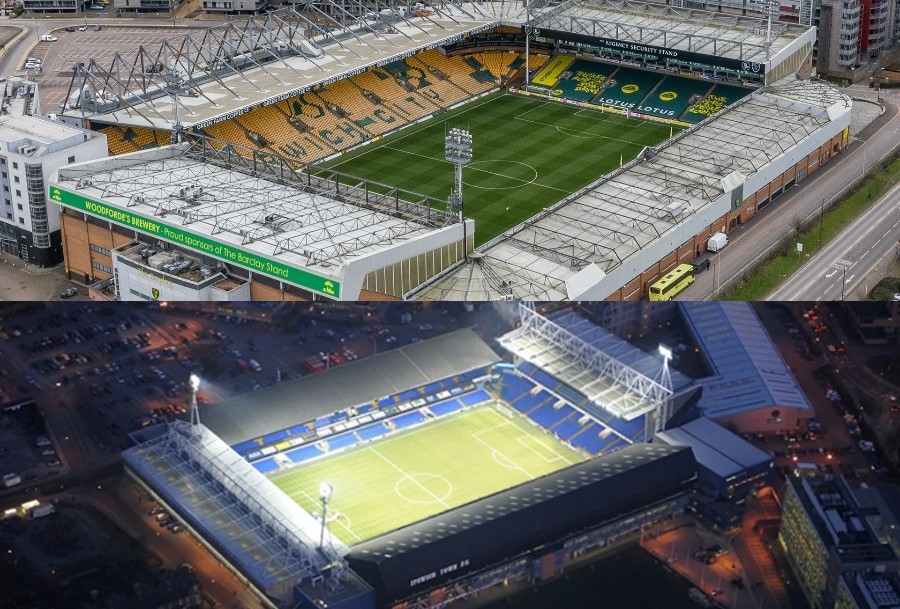 But, about once a season I do invariably feel the need to open up that festering wound that is the frosty relationship between yellow and blue, if only to hammer home a few home truths on either side.

It’s probably an age thing, but it drives me bloody nuts when the endless toing and froing reignites on social media, usually triggered by the faintest hint of oneupmanship from either side.

So, just to put it out there once and for all, a few facts:

Before I go much further, I should declare a conflict of interest. While my thoughts on those from down south have been well documented – not least from my time as the Metro’s Norwich City voice – I still can’t get as worked up about them and what their supporters say as many other City supporters.

My mum’s side of the family hail from Huntingfield, a small village tucked away in north Suffolk, and so, naturally enough, some of them chose the path of the Tractor rather than that of the Canary. Some thankfully didn’t – and chose the correct path – but it’s a roughly 50/50 split when the Cutts clan, which is many in number, congregates.

So, when I see City fans spitting feathers and venom in the direction of those in blue, I find myself unable to get as fired up as some for those obvious reasons.

But, that said, I didn’t half take some stick from those down south in my aforementioned time at the Metro – the type of stick you wouldn’t want your parents to read – and so while family members are out of bounds, there are times when I’ve felt the need to defend myself when under attack from other Blues 😀

Anyway… the latest round of ‘my dad’s bigger than your dad’ was triggered earlier today by a piece originally written by Stuart Watson for the East Anglian Daily Times but which was also published on the Pink Un. The thrust of the article was captured in its headline:

‘We’re going to push back!’ – Ashton’s message to Norwich City

Ashton, for those who don’t know, is Town chief executive Mark Ashton – a chirpy fellow who arrived in deepest, darkest Suffolk from Bristol City off the back of Marcus Evans being bought out by that group of US businessmen who fund the club via an Arizona State pension fund.

Central to the piece was the fact that Ipswich have, over recent weeks, recruited four members of staff from Norwich City – only one of which was football-related.

But in Ashton’s eyes, this is the start of the fightback.

He continued to make the point that City have Player Development Centres in the Suffolk locations of Whitton, Kesgrave and Bury St Edmunds, and he thinks these should be areas over which his club has the pick of the crop.

I tend to agree. We’d be pi$$ed if Ipswich had centres of excellence in Costessey, Poringland and King’s Lynn, so as inflammatory as the headline may appear, he’s not saying anything I wouldn’t expect him to.

Ditto the fact that he wants to beef up their equivalent to our CSF, which now goes by the name of the Ipswich Town Foundation – an organisation that in the Evans era, and under the guise of the Community Trust, was wound down to virtually nothing.

As a club with – whether we like it or not – the closest demographic to our own, if they’re not serving their community then why not.

But, all in all, there was nothing there to really rile us up. But it was still enough.

There’s undoubtedly an ambition and swagger about them that’s not been there for a while – a belief that under the new regime and Kieran McKenna, they have their best chance in a while to return to the Championship.

And they may be right.

So, we need to remind ourselves that the bragging rights won’t remain ours forever and when our paths do next cross they’ll be sniffing blood. As much as it pains me to say it, they will beat us again and we’ll probably never hear the end of it when it happens. It’ll be one to take on the chin.

Also, get this… one day, they’ll be above us again in the league pyramid, and that’ll sting.

For now though, they first of all have to worry about escaping League One, which – as they’re proving – is not as easy as it sounds. Ask Sunderland too.

But they will be back at some point, and we’d better be ready – both on the pitch and on Twitter.