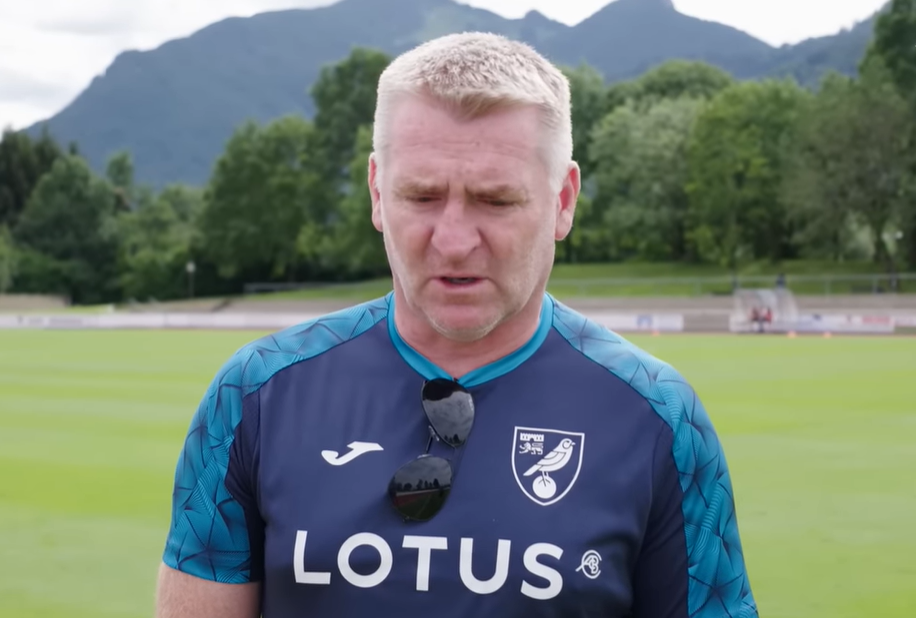 So, things are slowly starting to move – both in terms of incomings and outgoings. Still slowly, but they’re moving. We even appear to have a new signing imminent… possibly.

So… the Norwich City week that was:

A slow start to the week, with the first team squad partaking of day three of what looked a gruelling training camp in Bavaria. From the club’s official footage, Jordan Hugill looked, as ever, to be front and centre of all things ‘banter’ and it was good to observe Todd Cantwell being all happy and smiley.

The other big news of the day was the Premier League and EFL announcing that safe standing, after several successful trials last season, will be permitted from the start of the new season.

From a Norwich City perspective, discussions have already taken place around this, with a chunk of the Lower Barclay and the Snakepit being said designated areas. Whether there’s enough time for the work to be done between now and August 6 looks doubtful.

The only other thing of note came in the Pink Un’s podcast and an interesting line from our Connor on the rumoured investment from the Milwaukee mob:

Quote: ‘We understand there is nothing imminent. But Attanasio remains undeterred in his willingness to invest. These things can be complex and no news is always good news.’

It appears the plan, if indeed it does come to fruition, is for Attanasio and his people to acquire just the current 18 percent shareholding of Michael Foulger… for now.

The big news of the day was that Ipswich Town are coming for us… apparently. Their CEO, a punchy chap by the name of Mark Ashton, told a Town fans’ forum that he was fed up with City encroaching on Suffolk turf and is having no more of it. He went on to describe the development centres City have set up in deepest Suffolk.

In truth, he wasn’t saying anything we’d not expect him to say but while we’re still in different divisions, a turf war, rather than a battle on the pitch, is the best he muster.

There was also news that Josh Martin – a player many of us saw as re-entering the fold this season after successful spells out on loan – didn’t make the plane to Germany. Instead, he has been training with the 23s at Colney and seems almost certain to leave the club.

The 20-year-old attacking midfielder is in the final 12 months of his current deal, and was sent out on loan last season by Daniel Farke after making his Premier League debut in July 2020 and featuring in the Championship-winning team of 2020-21.

Finally… a transfer rumour with legs! After weeks of patience, we were at last linked with a new player. Reports coming from South America suggested we were looking to secure a season-long loan for Sao Paolo’s 23-year-old Gabriel Sata – an attacking midfielder who, via his YouTube showreel, looks to be the only Brazilian in history not blessed with flicks, tricks and silky skills. Some may even describe him as slightly awkward.

But, with Dean Smith openly on the search for a number 8, and Stuart Webber having openly (and quite rightly) declared that more physicality and mobility are needed in the centre of that midfield, Sara ticks several boxes.

Also… some of our big names rejoined the travelling throng in Germany, among them Tim Krul, Teemu Pukki, Milot Rashica and Danel Sinani.

A big day… a huge day… massive day! But, while for some it was all about the ongoing shenanigans on College Green, Westminster, for us the big news was that Przemysław Placheta was heading out on loan to Birmingham City for the season.

Another to depart, this time permanently, was centre-back Akin Famewo who completed a move to Sheffield Wednesday, while other rumours linked Bali Mumba to a season-long loan to Plymouth Argyle.

In less surprising news, Christos Tzolis again popped up on the radar of Club Brugge.

More incoming transfer rumours! The Pink ‘Un, or more to be precise our Sam, reported that City are interested in Manchester City’s Marlos Moreno, the initial reports emanating from the forward’s native Colombia.

The 25-year-old, who’s not played a single game for Guardiola’s first XI, joined Man City from Atletico Nacional in 2016 but since then has been sent out on loan to no less than seven clubs, most recently at KV Kortrijk in Belgium where he scored twice in 27 games.

It seems we have competition from Championship rivals Bristol City and Sunderland, which is never a good thing when you consider the continued shallowness of our pockets, but, intentional or otherwise, there seems to be a South American theme developing as Smith and Webber look to strengthen the squad.

And in terms of our Brazilian friend, I give you this from Archant’s Paddy Davitt:

The key element of Paddy’s tweet, as many of you will know, is #nocircus – Davitt code for ‘it’s happening’. So, barring any late hitches, it looks like we should expect a box-to-box South American midfielder to be crossing the Colney threshold in the next week. Keep ’em peeled. 👀

In deepest Bavaria, as part of the ongoing teambuilding and, I guess, as a break from the relentless double and sometimes triple sessions, the players and staff went white water rafting – which was nice.

Game day! The German training camp concluded with a game against 2.Bundeliga side SSV Jahn Regensburg at the SV Grassau Sportspark.

Not for the first time in a pre-season game of this ilk, it was played in the form of three 30-minute periods. Not that it really matters at this stage of proceedings, but it ended 2-2 with City’s goals coming from Todd Cantwell (a header!) and Jon Rowe.

Also noteworthy was that in Smith’s post-match interview, he made special mention of Danel Sinani and how well the Luxembourg international has done both in training and in the game. If I didn’t know better, I’d say Sinani could well feature this season, but attacking midfielders is an area in which we’re currently overloaded. Some will be departing, either on loan or permanently.

One interesting aside, unrelated to events in Germany, was the Pink Un reporting, via, Goal.com, that a potential stumbling block to the Sara deal has arisen. They even describe it as an “impasse”.

While it appears the fee has been set and agreed at £12million, City are reportedly looking to pay the fee in instalments over a two-year period, while Sao Paulo want more than 50% of the fee up front – another case of our ultra-shallow pockets coming into play when trying to get a deal over the line.

So, maybe it’s not quite the done deal as we’d assumed on Friday.

Either way, I have an inkling this could be an interesting week.

NOTE: Ten minutes after posting this piece, Paddy tweeted this…