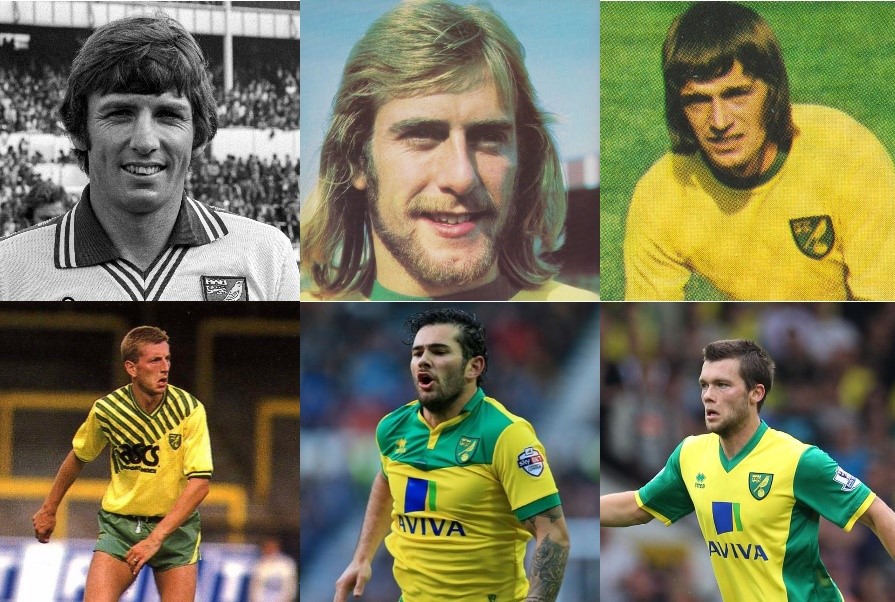 The football gods have decreed that there will be extra time in MFW regular Alex Bain‘s silly season series on his favourite Norwich City players of the past and in this final instalment, he recalls some of his favourite midfielders.

We’ve had some crackers over the years, so let’s have a shufti at Alex’s choices – he is keen to point out that he might be influenced by the fact that a few of them came to us from his second team, Spurs.

So take it from the top, Alex…

Colin Suggett was signed from WBA for £70k in 1973. He played 203 games and scored 21 goals, He started his career with his home town club Sunderland and ended it playing for Newcastle.

Martin Peters was the first of the players that graced Carrow Road from Spurs and joined at the age of 31. He played 207 games and scored 44 goals. The Ghost was one nickname for him as he was adept at appearing in the area at the right time. He signed in 1975 for £40k and sadly died in 2019 aged 76 after a relatively long illness.

Jimmy Neighbour was the second of the Spurs players to be signed, just a year after Peters in 1976. He cost £75k, played 106 games and scored five goals. Neighbour died at the age of 58 following a heart attack. Having seen him play for Spurs from 1969 until 1972, I was pleased to see him arrive at Carrow Road. He was sold to West Ham in 1979 for £150k.

Ian Crook is the third of the Spurs players I will recall, signed for £80k in 1986. He played 418 games scoring 24 goals and, to me, he was the engine that made the European team tick. He will be remembered for signing for Ipswich but cancelling the contract and re-signing for City on the return of Mike Walker. He was briefly on the NCFC management team under Bryan Gunn.

Graham Paddon was signed from Coventry by Ron Saunders in 1969 for £25k, playing 162 games and scoring 19 goals. He was sold to West Ham in 1973 for £170k. Paddon returned in 1976  for £110k and played a further 128 games, scoring six goals. He was predominantly left-footed and possessed a powerful shot – another who departed this earth far too soon.

Alex Tettey was signed from Rennes by Chris Houghton and became a fans’ favourite over the nine years he was with us. He never gave less than 100% and scored a few fantastic long-range goals. “Tetts” played 244 games and scored seven goals.

At this point, Alex asked me [sub-editor Martin P] to step in and mention a few of my own choices – insisting that I had to mention the following four – so from this point on, consider the reins to have been passed.

Bradley Johnson: Memorable for his displays against 1p5wich. We sold the wrong player at the time and that’s for sure.

Jeremy Goss: Struggled to break through for ages but will always be remembered for that goal in the Olympic Stadium.

Wes Hoolahan: What service he gave us over the years – and what entertainment too. A true NCFC legend.

So just a few from me to end with:

Andy Townsend: A bargain basement buy from Southampton, he didn’t hang around NR1 for too long but thoroughly impressed me while he was here.

James Maddison: Again not effectively here for that long but you only have to watch Match of the Day to see why I like him. He showed his caring side in the community as well.

Ollie Skipp: Excluding Hucks, as the circumstances were different, the best loan player we have ever had. Young Mr Skipp was the glue that held us together in the Championship-winning side of only two seasons ago.

You good MFW readers will always have favourites of your own and as always don’t hesitate to let us know of anybody important that Alex and I have missed.