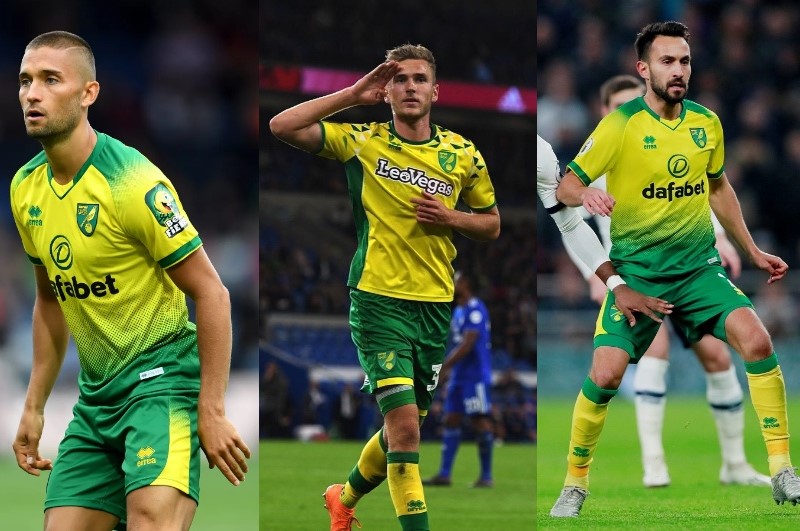 We have reached the end of an era at Carrow Road. Throughout his time at Norwich, former manager Daniel Farke made a total of eight German signings, with the last of them leaving the club this week.

The intake of players in Farke’s first transfer window in 2017 consisted of much of this list, with others coming later and with varying degrees of success in both Daniel Farke’s and Dean Smith’s Norwich City sides.

Zimmermann may well be regarded as a Norwich city legend in the years to come. He played all but six games of the first title-winning season under Farke, and they captained the side in the Premier League on multiple occasions. 139 appearances spanned five seasons, two Championship titles and one headed tackle against Wolves.

He was signed from Borussia Dortmund II in 2017 after Farke brought him from his former club. There was less than a month in between the appointment of Farke and Zimmermann being signed so it was clear that he was a key part of Farke’s plans.

Zimmermann is no doubt one of if not the most successful German signing from the Farke era, his leadership qualities as well as a physical presence at that back made taking him on a difficult task for any striker.

Zimmermann has just joined Darmstadt 98 in the second tier of German football on a three-year deal, meaning that none of Farke’s German signings remain at the club.

Leitner was initially signed on loan for the second half of the 2017/18 season but was signed permanently as so many were just ahead of the first title-winning season under Farke.

He made 53 appearances for the Canaries while scoring just twice. Leitner chose his goalscoring moments well, his first goal for the club was in a chaotic 4-3 win over Millwall while his second was a second-half equaliser against Ipswich to keep the unbeaten run alive.

After officially leaving the club at the end of the 2021/21 season, Leitner joined FC Zurich and made 11 league appearances before being released at the end of his contract earlier this month.

At times, Leitner was one of the most technically talented midfielders at the club, but inconsistency and falling out of favour hindered his career at Carrow Road.

Tom Trybull was one of the staples of the successful 2018/19 squad who dominated possession in midfield and formed a fluid movement up the pitch. He joined for just over half a million pounds at the start of the 2017/18 season, but his true form in the side wouldn’t be reached until a year later where he and Mario Vrancic formed a midfield partnership that would help to contribute to winning the title.

The club clearly had somewhat faith in the defensively-minded midfielder as he made 16 Premier League appearances under Farke. It wasn’t until the October following relegation that Trybull would depart the club, initially a loan move to Blackburn but later a permanent move to Hannover. He currently plays for SV Sandhausen in the Bundesliga 2.

Not much can be said about Dennis Srbeny’s time at Norwich City. He joined in the January transfer window of 2017/18 and didn’t play too much of a role in the following title-winning season. His most notable contribution to the Canaries was his only Premier League goal in a 2-0 win away at Goodison Park.

He left the club in January of 2020, re-joining his former club SC Paderborn in the Bundesliga.

An unorthodox playing style for an attacking midfielder often meant that Marco Stiepermann caused problems for the opposition. Originally signed as a fullback, Stiepermann proclaimed that he was born to score goals when he first arrived in Norfolk.

Another with experience at Dortmund, Stiepermann was signed from VfL Bochum in 2017 and went on to make 119 appearances for the club, scoring 12 goals. The left-footed midfielder’s most memorable goal was against Bristol City in the Championship where his left-footed shot nestled in the bottom corner in a 2-2 draw away at Ashton Gate.

Illness restricted his progress towards the end of his time at the club and he never rediscovered the form that he and so many others found in the 2018/19 season.

He has played for two clubs since leaving Norfolk, moving initially to SC Paderborn but more recently dropping down to the fourth tier in Germany to play for Wuppertaler SV who have just kicked off their season.

You would be forgiven for not recalling Marcel Franke in a Norwich City shirt, he made just seven appearances for City before heading out on loan to Dynamo Dresden and then later to Darmstadt 98. He currently plays for Karlsruher SC in Bundesliga 2 after making 74 appearances for Hannover 96.

Phillip Heise is another signing that went somewhat under the radar, as he made just one first-team appearance in the league cup for the Canaries before two loan moves to Germany wound up his Norwich City career. The 31-year-old now plays alongside Franke at Karlsruher SC.

Having joined an already struggling side in the Premier League, Lukas Rupp understandably took time to find his form in yellow. He was signed in January of the 2019/20 season from Hoffenheim and it was clear to see he was out of his depth in the Premier League just as many around him were.

It was the following season however when Rupp found some form and began a run in the first team. He made 23 appearances, helping to secure a second Championship title in three years. A highlight was his dominant midfield display against Birmingham where he attempted more passes than all four of the Birmingham midfielders combined.

While achieving a somewhat cult hero status in the eyes of some groups of fans, he never really made much of a difference in the 2021/22 Premier League season and was released at the end of his contract last month.