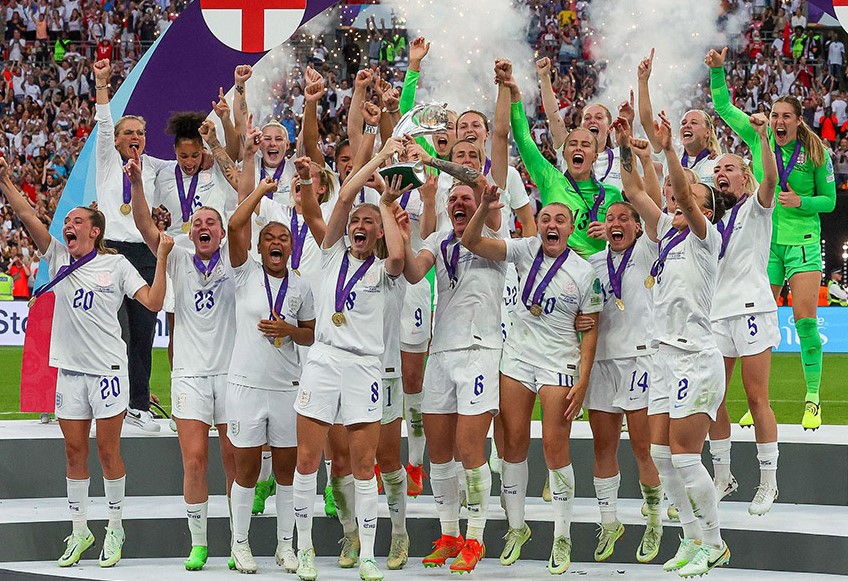 They think it’s all over. It is now.

See? It’s easy. What’s all the fuss about? None of that penalty nonsense.

The clock was ticking inexorably towards the inevitable penalty shoot-out – it was Germany after all – when up popped Chloe Kelly’s right boot to put right the wrongs of fifty-six years.

And it was so fitting to see Lionesses triumph in this way.

Germany are a very good team. They are well drilled and their game plan was working. After their late equaliser, there was a very real danger that all the positive energy surrounding the tournament and England especially was going to be sapped away by some cynical and, at times, quite nasty tackling.

It would have been such a shame if those tactics had prevailed.

It’s impossible to overestimate the good that has come from these last three weeks . Even the most intransigent, misogynist football fans have sat up and taken notice.

I went into my local chippy last week and the bloke who fries the fish (Liverpool fan, traditional male supporter) said to me,  ‘Hev you bin watching the wimmin?

He countered, ‘Can’t believe what I was seeyen. Five years ago, couldn’t string five passes together”.

Of course, he thought he was being nice, and indeed up to a point what he said was true.

But things have changed. Of course, money has everything to do with it – we’ll never get away from it. But also very slowly, in this part of the globe at least, society is changing and women’s sport with it.

I played both ladies cricket and ladies football – the latter in the mid to late seventies and things were very different then.

My team played in the East Anglian Ladies Football League. We were originally called The Norfolk Broads, but as you can imagine we had to change that. A sign of the times! We became Costessey Ladies FC instead.

For the most part, the quality wasn’t great. Scorelines were often in double figures, but having said that, this part of the country supplied several England internationals. Linda Curl, for example, who went on to feature at the highest level for many years started her career alongside me at Longwater Lane.

Because it was an unusual sport for girls to play, it was normal to have to travel long distances just to get a game. Away matches could see us starting off very early on a Sunday morning and driving to places like Colchester, Ipswich and Kings Lynn.

The first season I played there wasn’t even another team in Norwich, although one formed soon after. We had to arrange our own funding, mark out our own pitches, put the goalposts up ourselves, and we often had trouble finding a referee and linesmen.

It was hard work but what was worse was the attitude of other people.

People thought us rather strange because girls just didn’t do that. I’m not even sure my mum was particularly impressed by her daughter’s choice of a hobby. There was also the whispered sneering we had to endure, we were mocked for poor standards, some of us called fatties, and had our sexuality questioned, often loudly from the touchline.

But we stuck with it because it was great fun and we had an inkling it was the way forward.

I haven’t been involved with women’s football for many years now, but things have changed beyond all recognition. Professional players are the norm these days. Most Premier League and Football League clubs have ladies’ teams.

Norwich City have recently taken NCWFC under their wing, and the integration can only benefit the ladies’ team. They play at The Nest so have access to the best facilities (why not go up and see them?).

I suspect they don’t have to put the goalposts up themselves!

Of course, all of this has come far too late for the likes of me and my teammates. The truth is, I was never good enough anyway, but that’s not really the point is it?

It shouldn’t matter how good you are. What does matter is if you enjoy playing a sport you should be able to, irrespective of sex, creed or colour.

My granddaughter is eight months old. She will grow up thinking girls playing football is absolutely normal in the same way they play tennis and hockey. And that makes me very happy.