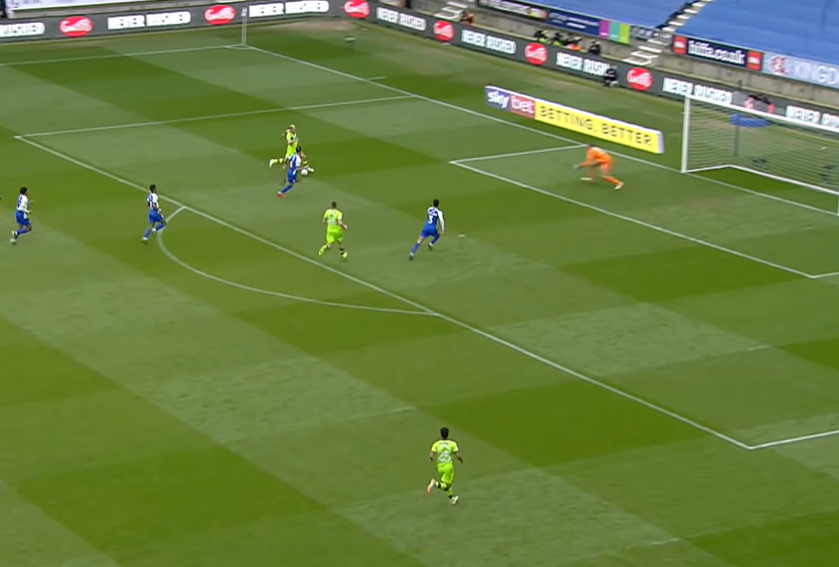 The Premier League dream is over (again!). City are back in The Championship and it’s a very familiar fixture list that the Canaries face in 2022-23.

But this being football, there will be a few new(ish) faces and, as such, an opportunity for a brief return of ‘We Meet Again’, the series that looks back at the history between Norwich City and our upcoming opponents.

It’s one to appeal to the nostalgic side in us, so enjoy the memories…

This week it’s a visit from one of the league’s less glamorous clubs. A Northern outpost more associated with Rugby League than football but at the same time a recent FA Cup winner and a club that spent eight consecutive seasons in the Premier League.

So, a warm lunchtime welcome to Wigan Athletic.

It hasn’t actually been that long since we clashed with Wigan. Daniel Farkes’ famous first Championship title-winning season featured a key game in the run-in against the Latics.

A yellow wall was constructed in the North West that day. It was a Sunday face-off in front of the Sky cameras. A big game in every sense of the word.

A win would take Norwich to the brink and a nervy performance, minus the suspended Emi Buendia, was to follow. We conceded a controversial penalty for a Ben Godfrey handball (and we can’t even blame VAR for that one) but luckily one man who doesn’t do nerves is Pukki. The run and finish were classic Teemu.

It proved to be a point gained in the end as the following week that same Wigan team went one better by beating Leeds away.

The Wigan manager that day was one Paul Cook, a name we will come across later.

The earlier game that season at Carrow Road was significant in that Norwich’s winner came from the penalty spot. Mario Vrancic’s late winner was the only penalty converted in a campaign in which six were missed.

In our history, we have only played Wigan 15 times, much less than most of this season’s Championship opponents. That’s not to say that even in that short spell there haven’t been some big games and big moments.

The very first game was one such occasion in the 1986-87 FA Cup Fourth round.

So often the giant-killer, Norwich had a taste of their own medicine when they travelled to Wigan’s old Springfield Park on 31 January 1987 – our only trip to Wigan’s old home.

City were enjoying a superb season back in top flight while Wigan were two leagues below in the old Third Division. No one, therefore, foresaw the 1-0 shock defeat.

It was an even bigger shock when considering in those days full-strength sides featured in cup games and during that season Norwich had beaten Liverpool, Arsenal, Tottenham and Manchester United.

Add in the statistic that the Wigan defeat was the only one in a run of 17 unbeaten games, it was a massive cup shock and a huge missed opportunity for Norwich as Wigan then went on to play Hull and then Leeds – both opponents Norwich would have expected to beat.

Starring for Wigan that day was Paul Cook.

Cook was later signed by Dave Stringer, although it was a move that failed to work out. He made only eight appearances in over a year at Norwich before being sold to Wolverhampton where he enjoyed much more success. For City, there was a tidy profit of £180k so, all-in-all, a happy conclusion for all parties.

The reason why we have played each other so few times is because Wigan were a non-league side, playing mainly in the Northern Premier League, and only joined the Football League in 1978. As a result, the first ever league meeting came in the promotion season of 2003-04 and a 1-1 draw at Wigan’s new home – the JJB Stadium.

Wigan were a strong side that year, finishing seventh, therefore the Norwich win at Carrow Road on 9 April 2004 – 2-0 in front of the Sky Sports cameras – was a significant result in our own promotion push.

The next time we faced Wigan was in the Premier League and it was a particularly special occasion.

After a gap of six seasons (including one in League One) City were back in big-time after very special back-to-back promotions. This journey only heightened the sense of excitement and anticipation when Norwich travelled to Wigan on the 13t August 2011 for the opening match of the season.

Wes Hoolahan’s strike earned us a good point that set the tone for a successful season.

Norwich had a good record against Wigan while in the Premier League, losing just once on our last meeting at that level – a 1-0 defeat at the JJB.

The only other time we have suffered a league defeat at the hands of Wigan was on 4 March 2015.

This took place in the Championship and although not rivalling 1987, it proved to be another surprise result.

It was one of only three defeats suffered under new manager Alex Neil and broke a sequence of six consecutive wins, the last of which was a Bradley Johnson-inspired 2-0 derby win over Ipswich.

City confidence was sky high, especially as Wigan were struggling, but football being football, the Latics turned the form book on its head to win 1-0.

One week beating high-flying Ipswich in a memorable derby win, the next the lows of a shock home defeat to relegation strugglers.

Just one final footnote on that game – the Wigan manager that day was none other than City’s former defensive rock and Hall of Famer Malky Mackay.

Also, if you’re interested in listening to Allan and his mate Val Tolhurst talk through City vs Wigan encounters of yesteryear, then ‘Al and Val’s We Meet Again’ podcasts can be heard on Spotify…