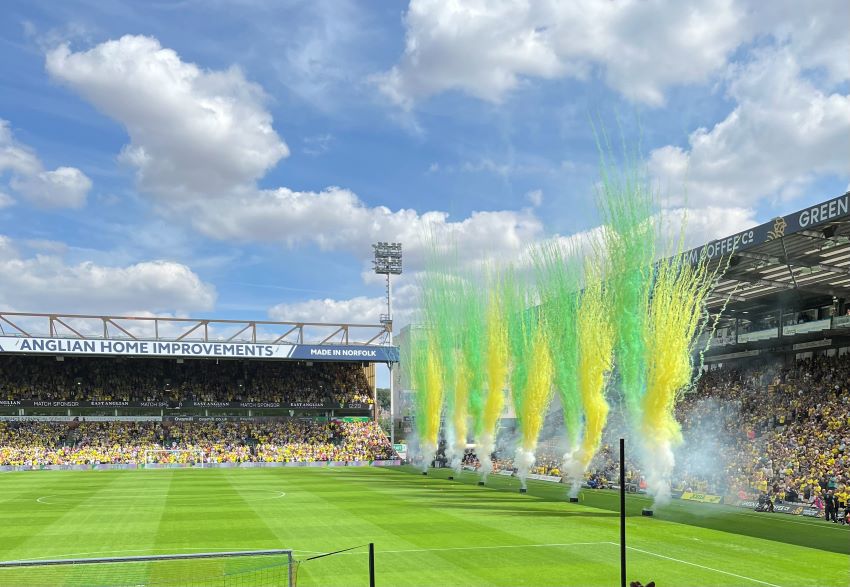 It was one of those something-for-everyone afternoons.

For the pyro lovers, there was Carrow Road’s best effort yet; for everyone, there was a much-deserved ovation for our heroic Lioness; for the optimists, there was a performance that was infinitely better than its Cardiff equivalent, and for those who continue to demand Dean Smith’s P45, there was a mixed performance against a very average team that yielded just a single point.

And there’s no escaping the fact that earning a single point from two games against two very average teams is a rotten return. But there’s also no debating that from minutes one to 25, City were excellent yesterday and did play with a hitherto unseen rhythm and flow.

There was (whisper it quietly so as not to offend) even evidence of the pattern of play that Smith and Shakespeare are demanding.

Of course, there is still a long way to go before this iteration of Norwich City is the finished article and those lingering effects of that bruising Premier League campaign are still to the fore.

The warning signs were there when, amidst that thoroughly decent opening spell, Lungi Sorensen was far too easily brushed off the ball in the worst area possible, forcing Tim Krul into a really good save to keep the score still level.

It was the type of blunder that blighted the whole of last season and which can be ill-afforded at any level. And then Ben Gibson thought he’d join in.

The exact type of cock-up that saw him dropped from the starting XI at the back end of last season came back to haunt him again – the type of error you don’t expect from one of your most experienced defenders.

Yes, mistakes do happen but they happen too often to us. For all the pressure the Wigan defence was under yesterday, not once did they give the ball away in key areas like Sorensen and Gibson did.

For as long as we continue to do that it will be a struggle.

And then there’s that fragility that runs like a golden thread through this team – the one borne of terrible performances and heavy defeats last season. For now, this is a team that’s forgotten how it feels to win; that wilts when it concedes because it knows what comes next.

I’ll not be thanked for saying it, but it needed some halftime words from Smith and Shakespeare to help steady the ship and, maybe, remind them it was Wigan they were playing, and not one of those horrible games that, even at just 1-0 down, was already beyond them.

That spell betwixt Wigan goal and halftime was a tough watch.

But, in fairness, they rallied well after halftime and that they didn’t end up wining the game was quite frankly ridiculous. Seventy percent of possession and 22 shots should be more than enough for a comfortable win, but when you’ve forgotten how it becomes tough.

Once they overcome that invisible barrier and experience the winning feeling again, I sense it could yet be the season we all want it to be. But the longer that wait for three points goes on, the harder it becomes and the louder the voices of the P45ers will get.

Yet for those of a half-glass-full disposition, there was also something there.

For 30 minutes, Marcelino Nuñez was everything we’d hoped he’d be and looked far removed from a player whose only been in the country for four days. Neat, tidy and with an eye for a pass, he fitted in perfectly to the pass and move football that saw City dominate the opening stages.

That he fizzled out a little as the game wore on was understandable; there was more than enough there to whet our appetite for what’s to come.

At the other end of the time continuum – one who’s been here rather more than four days – was a certain Todd Cantwell, who reminded us yet again what a good player he can be when his own planets are aligned.

This, to me, looks like the Todd of 2020-21 – the one who we were only able to see through our TV screens but who was creative and influential and busy – and a far cry from the lost soul we saw in his rare appearances last season.

Only good can come of a Todd Cantwell in this place in a yellow shirt.

Max Aarons is another who’s part of the Carrow Road furniture but who excelled yesterday. Unlike Cantwell, who’s benefitting from new-start syndrome, Aarons still bears the Premier League scars but appears one of the few unaffected by them.

His was a performance of energy, verve, attacking intent, a gashed shin and a rare but priceless goal. More of the same between now and the end of the transfer window and Stuart Webber may have a big decision to make.

The gash on the shin will hopefully soon heal and leave no lasting damage, but it was a nasty one and I’ll take some convincing that Master Naylor was neither out of control nor reckless when he made contact with the ball first and then Max’s shin.

It wasn’t the only matter of the afternoon on which Matt Donohue and I disagreed but let’s leave it there. I try not to waste column inches on moaning about referees as I’m hardly impartial and confess to seeing everything through yellow-tinted contact lenses.

Talking of injuries, we can only but hope Dimi Giannoulis’ injury isn’t horrific as it looked at the time. But it’s a blow on many levels, not least for the player himself who had done well and looked set to be Dean Smith’s left-back of choice.

What it’s done, rightly or wrongly, is to open the door for Sam McCallum, whose second-half cameo was one of promise. Despite having a wobbly pre-season, the ex-Coventry lad has talent and is, for me, more than capable of fulfilling the role of attacking left-back.

Onel Hernandez too made his mark from the bench. At a time when the levels were flagging, Onel, scurrier and scamperer extraordinaire, added energy and freshness when it was most needed and dragged others along with him.

His final ball may let him down at times, and he’s so unpredictable even he doesn’t know what happens next (so how can his opponent), but his enthusiasm is infectious and gives those around him a lift.

In cricket, they’re now called mystery spinners. In Onel, we have our own mystery winger.

I’m not sure Hernandez will be a regular starter in any Dean Smith starting XI but he’s a great option to have on the bench, and he’s certainly good for the LOLs (as the kids say).

Tuesday night offers the chance for those on the fringes and who need minutes, and crucially will give Gabriel Sara, whose late cameo offered promise, an opportunity to stake a claim for a start at Hull next Saturday.

I’m not sure when we’ll get to see Isaac Hayden in action but I hope the wait’s not too long. A midfield that contains him as its anchor and two fully fit South Americans in front of him will be a considerable step up from what we’ve seen so far.

For now, we just have to be content with incremental steps of improvement, and pray that somehow, from somewhere they can conjure up a win.

Then the season can begin.