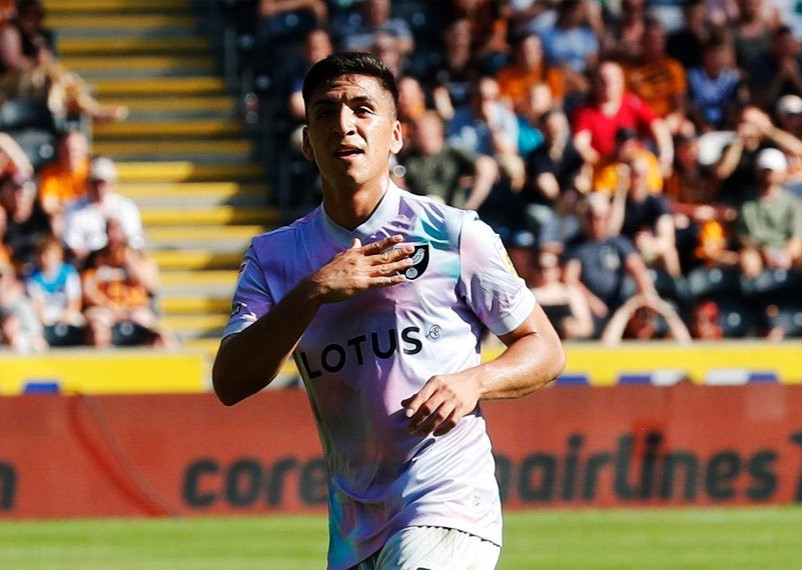 City travelled to Hull desperate for a first league win of the season, with over 1,500 Canary fans packed into the North Stand of the MKM Stadium.

The Tigers’ start to the season was positive, beating Bristol and Preston, before a slightly unsettling Carabao Cup loss to Bradford City in midweek

Dean Smith made two changes from the side that drew with Wigan last week. Grant Hanley was back in, following his suspension, and Kieran Dowell came into the midfield for Dimi Giannoulis, with Jacob Sorenson slotting in at left-back.

Within the first few minutes, Teemu Pukki had an excellent chance. Marcelino Nunez won the ball in the opposition box, had a shot saved, and the ball fell to the Finn. Despite the goalkeeper being off his line, Pukki was under pressure and had to take the shot first time. Matt Ingram flung a leg at it, deflecting the shot a few inches past the top left corner.

City started the better side, dominating possession and closing in on Hull. The Yellows managed 10 shots in the first 25 minutes and kept play in the final third with ease.

Pukki, Nunez and Todd Cantwell all had half-chances, not really testing Ingram, but it looked like it was going to be plain-sailing for City. But then, the pressing started to drop.

Norwich allowed Hull time on the ball, and they looked to play into the channels. A Hull central-midfielder sprayed the ball into the flank for Ozan Turfan to run onto, forcing Andrew Omobamidele into the foul – subsequently picking up a yellow card.

The home team applied pressure and kept the ball in City’s defensive third before finally, as we’ve come to expect, there was a defensive error by Norwich City.

A lofted ball towards new signing, Oscar Estupinan fell to Max Aarons in the box.

The right-back took a touch and blasted the ball into Andrew Omobamidele with his left foot. It took the Irishman by surprise – winding him – as the ball fell to Estupinan, who couldn’t believe his luck.

Seriously. I queued for half an hour.

The first 15 of the second half were largely uneventful, with Hull undecided as to how positive they should play, and City wanting to regain some balance.

Then, disaster struck for Sorenson. Lungi was fouled a few minutes prior and was deemed unable to continue, as once again, Norwich were left without a left-back.

Kenny McLean filled in, as Liam Gibbs came into midfield and Josh Sargent replaced Milot Rashica on the right wing.

Five minutes later, Hull won a corner. Turfan’s cross found Callum Elder, who forced a solid save out of Tim Krul. The ball fell to Alfie Jones, whose shot was cleared on the line by McLean, until it once again fell to Estupinan who was at the right place, at the right time, to smash home.

Just before the 70-minute mark, City made another two changes. Onel Hernandez replaced Cantwell, and Aaron Ramsey was on for Kieran Dowell.

The ball was hit into the right channel for Sargent to run onto. He cut back, 25-30 yards from goal, winning a free kick.

Marcelino Nunez stepped up, and smashed it home into the top right corner. What a goal.

The Chilean was one of Norwich’s only positives from this game. An excellent player.

Five minutes passed, with City banging on the door, and just when it looked like it was about to open, Ramsey blazed a shot over the crossbar. Aarons pulled it back, and the Aston Villa loanee was nearly on the goal-line to tap it home, but sliding in, the youngster got it all wrong.

The last 10 minutes of normal time were tense, with Hanley skying a header from a Nunez corner.

A cheer chorused among the City fans when the stadium announcer declared seven minutes of stoppage time.

Ramsey, Omobamidele and Aarons worked well down the right flank, creating chances for McLean and Hernandez.

Once again, the ball was squared to Ramsey – surely he’d score this time? A terrific goal-line clearance from a Hull defender denying him, on this occasion.

With a minute of injury time to go, Nunez had another free kick, in a similar area to his previous attempt. This time, he went for the opposite side, forcing an excellent save out of Ingram.

From then on, everyone knew it was over, and Hull left – perhaps undeservedly – with the three points.