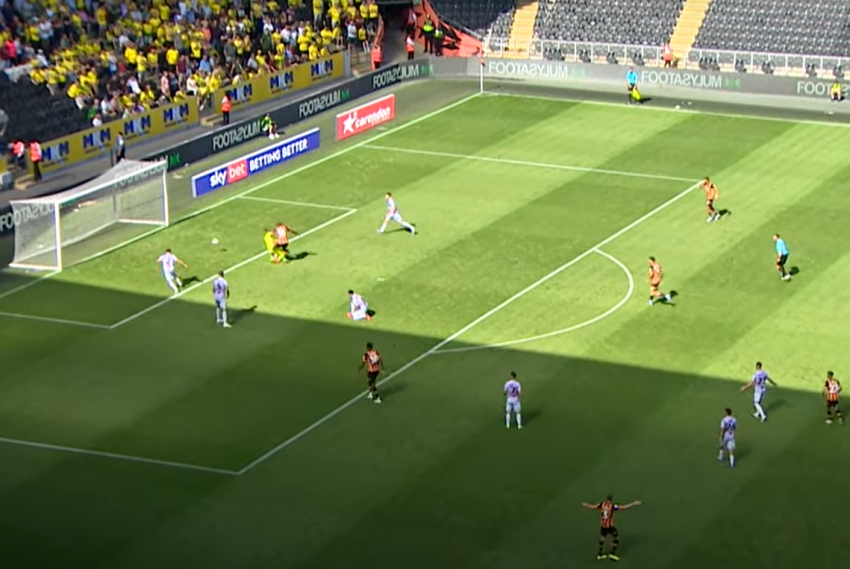 As part of MFW’s coverage of the new Championship season, the newest member of our team, Richard Becker, will be casting his eye over each game from a tactical and technical perspective, and giving us his view on what’s going wrong and (occasionally) right.

He starts with the defeat at Hull…

Another disappointing result at Hull continues our poor start to the Championship campaign. This piece will look to dissect the match and draw out any relevant themes.

It largely followed the same pattern as the previous two games. Norwich had lots of the ball (69%) but Hull always looking a threat when we gave up possession. As well as dominating the ball, City also dominated the territory, as seen in the action zones diagram.

However, most of this domination was reflected in terms of quality chance creation. And, despite always looking to the more likely side to score, City gave away two sloppy goals and left themselves a mountain to climb.

The quality of Marcelino Nunez shone, not least with that great freekick, and in truth City should get more from the game – especially with Aaron Ramsey missing that massive opportunity.

Alas, the game’s main themes were City having most of the possession and territory without threatening consistently, Hull defending well, and then City conceding the game through sloppiness.

I’ll analyse how Norwich builds attacks and the issue this causes when trying to sustain them and provide balance across our attacking play. I’ll also look at the lack of physicality in midfield and the effect this had on the game, and, finally, how passivity in possession against a low block resulted in City’s low-quality chance creation.

When you look at City’s backline, a potential issue that is soon apparent is the fact that they were all right footed.

So, when receiving the ball, the natural inclination and easy pass is to the right of the field due to the body position when passing with the right foot – the body angle massively restricts how the side can build attacks. This results in a right-sided bias as seen by City’s attacking direction diagram.

This particularly becomes an issue when trying to open up a stubborn low block, which Hull looked to employ, as you need to stretch back lines to create gaps between them in which players can then look to play through balls into dangerous areas.

To do this, you must seamlessly move the ball from left to right to create these gaps. Hull were unmoved and were able to maintain their defensive structure easily as City were too slow to switch the ball.

This clip shows what’s discussed above with Hanley not receiving the ball with an open body – the result is a lack of circulation and more often than not the ball going to his central defensive partner or back out to the right.

An issue highlighted consistently last season was the lack of physicality in midfield. The transfer window looked to address this but with these players either not selected or unavailable the issue was obvious once again on Saturday.

A midfield consisting of Kenny McLean, Kieran Dowell and Marcelino Nunez was unable to effectively cover the ground required and unable to wrestle control in duels. This is seen in the duels won stat.

Because Hull were able to win more duels, they were able to get themselves out of their half quickly and relieve pressure; on one occasion being gifted a goal, and on another winning a corner that they kept alive well to score the second.

To assert the quality Norwich have in abundance at this level, they must sustain attacks and limit teams’ chances to come back at them and create high-quality chances even with their own comparative limitations.

To do this City need to physically match teams first. As the old cliché goes, to show your quality you’ve got to work hard. Smith must get the balance right, and I feel he got it wrong against Hull.

The final theme to emerge from this match was the lack of action in City’s attacks. By this I mean players not taking responsibility to create and too often looking to someone else to make things happen.

This could be seen in the decision-making by our forward players who often looked for the safe option. Running parallel with this was a general lack of off-the-ball movement, a lack of penetrative runs, players not making themselves available in the build-up, and not enough selfless running to open spaces for teammates.

I believe this is partially due to the lack of offensive balance and also players currently badly lacking in confidence – a by-product of relegation and a bruising campaign in 2021-22.

This result of this passivity in possession means that players often snatch at opportunities or lack composure on the ball. This is evident in the xG map below. Norwich had several attempts but were never likely to score from them.

This clip shows how Hull were able to set up their blocks and allow Norwich to have passive possession. We didn’t move them about quickly enough to open gaps and, as a result, it ended in a shot typical of their attacking play in this game.

You can see the quality that Norwich possess and it was clear from the respect given to City in Hull’s game plan. They looked to limit space and survive.

However, City are currently struggling to break this sort of defensive system down due to the points discussed above. There are little adjustments that can be made and have no doubt that this side can comfortably see off teams in this division.

For all of the current problems, they still possess plenty of quality and have a system that is showing signs of clicking into gear, but it is down to the backroom staff to see if they can bring this out of the group.

Let’s hope it’s sooner rather than later so it doesn’t have too much of an effect on our final position. Once the train gets on track I still believe it will be hard to stop.