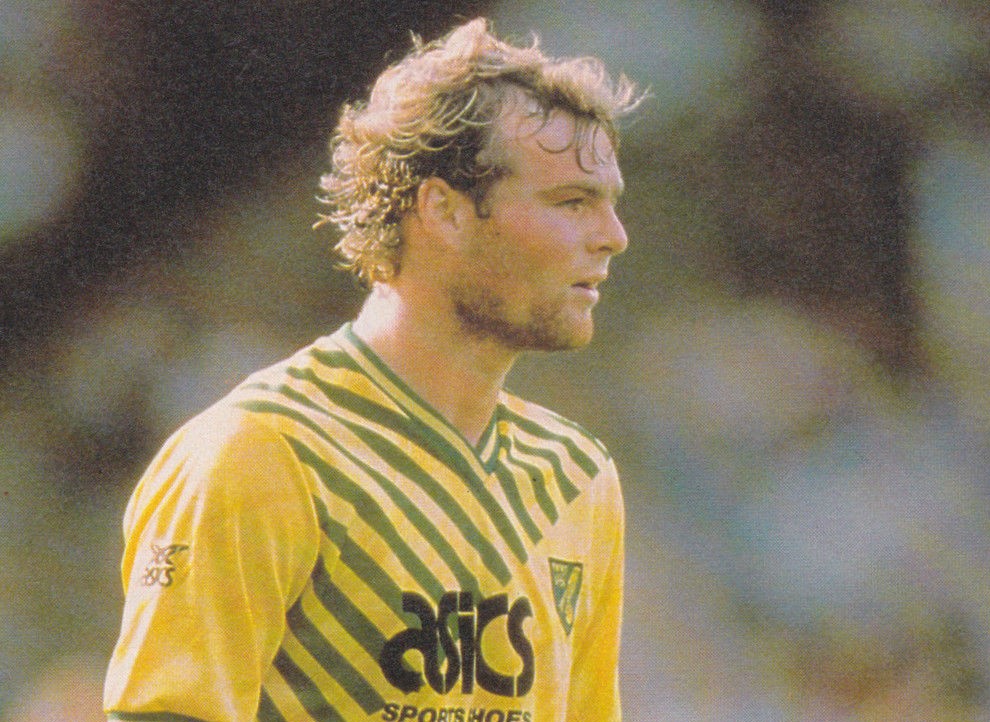 The scene was set.

Even the act of writing those five words makes me shudder. Sky really did think they were re-launching the game of football with their hijacked coverage thirty years ago.

A new manager was in place. Mike Walker had replaced Dave Stringer after Phil Neal had pulled himself out of contention at the last second. Walker’s appointment was the third (it ended up being four) consecutive internal managerial appointment that the Canaries had made.

Shades of the famous Liverpool boot room was then the order of the day at Carrow Road.

Walker had endured a busy summer.

Robert Fleck, talismanic, a yellow and green beating amulet who deeply symbolised the heart and soul of Stringer’s Norwich had left for Chelsea. It came as a shock but no one should have been surprised.

Fleck had, originally, made his intentions to quit the club loud and clear at the end of the 1990-91 season but, after no little cajoling and perhaps even a little pleading from chairman Robert Chase, had been persuaded to stay for one more season on the clear and implicit understanding he would be allowed to leave the club the following summer.

These are circumstances that have, of course, been repeated with regard to another hugely popular Canary in more recent years.

Once the 1991-92 season had finished, Fleck reminded Chase of the agreement. He’d done his part, now he expected the club to honour theirs.

Fleck already knew Tottenham and Chelsea were both interested in signing him and had talks with Terry Venables at White Hart Lane about a possible move to north London only to conclude that, all things considered, he’d prefer Chelsea, who were ready and waiting with chequebook to hand.

The logic behind the Chairman’s stance was, to an extent, logical.

Fleck was, for a Norwich City player, box office material. He put bums on seats. And quickly got them off them again. Plus he’d been the club’s highest goalscorer the previous season, responsible for nineteen of the Canaries’ total of 67 league and cup goals.

He’d been to a World Cup. As a Norwich City player. He felt irreplaceable.

The only player who came anywhere near him was Darren Beckford, who’d contributed ten. Yet Beckford, for all his strength, industry and willingness to put his head where other players might have thought twice about putting their feet never really seemed as if he was going to have a long-term future as a City player. He thrived on long balls, knockdowns and crosses into the box.

And that wasn’t Dave Stringer’s way.

Fleck, on the other hand, was all about little triangles, through balls, flicks and tricks. He had pace to spare, guile and all the sense of mischief you could ever want in one of your players. He was also, despite his reputation as a bit of a joker, an immensely intelligent footballer. He could read the game, he knew where the ball was going to end up before the ball knew.

Norwich had lost big-name players before. Even before Kevin Reeves had left for Manchester City over a decade earlier, the club’s supporters had got used to losing their star names. A Hugh Curran here, a Ron Davies there.

Davies, what a player he was. 113 league appearances, 58 goals. And all for just £35,000. He’d scored in each of his first four matches for Norwich, going on to get 30 in total for a team that, at the end of the 1963/64 season finished 17th in the old Division Two (now the Championship) and just three points shy of relegation, scoring, at one point, 11 goals in eight games.

He was the sort of player you not only built a side around, you created a dynasty. Norwich had the makings of the spine back then. Kevin Keelan in goal, Barry Butler at the back and Davies in attack. It was a team that, like Daniel Farke’s of the 2017-18 season was clearly set to go places.

Yet it never quite happened for Norwich and Davies eventually moved onto Southampton for just £55,000, going on to become, in the words of Sir Matt Busby, “…the finest centre forward in Europe”.

Fleck wasn’t quite in that place yet. But he’d be missed as much, even more so, than many of his illustrious predecessors, simply because of not only who he was, but what he was.

What he turned out to be, despite Chase’s best efforts to keep him at Norwich, was a Chelsea player.

Robert Fleck- “It seemed to me to be absolutely the best move I could have made at the time. I guess people have since thought it was a bad move for me as it didn’t work out quite as well as had been expected, but it was the right choice to make and I have never regretted making it.

“I was lucky to play alongside some great players there – big Mick Harford, Tony Cascarino and John Spencer…

“I arrived shortly before the start of the season so it was a bit of a rush at the beginning; Ian Porterfield was the manager who’d signed me with Don Howe as his assistant, perhaps Don was the problem for me?

“His philosophy was that you defend from the front – maybe not the game I’d been used to? It was a different way of playing and new teammates but I thought I would progress and become a better player. But Ian and Don got the sack and after that, it was always a struggle…”

Mike Walker now had to go into a new season without one of his most important players which was hardly ideal especially as the club’s reluctance to sell Fleck had meant that he’d only been able to join his new teammates at Stamford Bridge a few days before the opening fixtures, which saw Norwich travel to title favourites Arsenal.

This meant, of course, Walker only had a few days to sign a successor to Fleck or, failing that, have to choose between the still-inexperienced Chris Sutton or Darren Beckford to lead the line at Highbury.

Either could, and would, have been more than capable of doing so, but they’d be up against one of the best back fours in English footballing history in Lee Dixon, Nigel Winterburn, Steve Bould and Tony Adams, not to mention David Seaman in goal.

It was the sort of game and circumstances that Fleck would have thrived upon. But now he and all of that craft and guile that accompanied him had gone.

And that ‘whole new ball game’ was waiting…