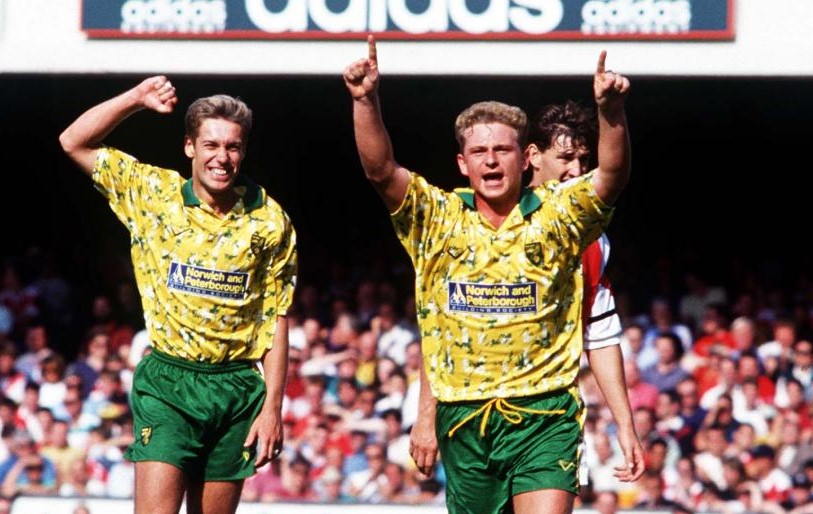 Mike Walker is giving his chosen XI some final well-chosen words. Delivered with all the passion and belief, which his players are already finding is core to his character.

“You’re here to win. They might have the names and the glamour but you have the heart, the energy, the work rate. Don’t let them settle. One touch, two touch football, always to feet. Pass and move, pass and move. We’re here to win. No one thinks we can. So let’s show them what we’re all about”.

Norwich’s starting lineup had one new face, 33-year-old midfielder Gary Megson, released at the end of the previous season by Manchester City. Megson was just what Norwich need, the sort of voice and character they desperately missed throughout the previous campaign, one that had seen them only just avoid relegation.

He never stops talking-cajoling, prompting and gesticulating. His legs aren’t what they were but no matter, he has Jeremy Goss playing alongside him, one of the fittest professional footballers in the country; a remarkable athlete who is still making the line between the beeps when lesser individuals have already deposited their breakfasts on the gym floor.

Goss will run himself into the ground as standard and Megson knows that, with the Welsh international playing alongside him in the heart of the Norwich midfield, his top-flight playing career has been given an unexpected but very welcome extension.

The other new face in the Norwich lineup is Mark Robins, the striker signed from Manchester United only a couple of days previously as a cut-price replacement for Robert Fleck.

He’s on the bench but Walker has made it very clear that he’ll get on the pitch at some point, reasoning that if the young but hugely talented Chris Sutton can put a little bit of wear and tear into weary Arsenal defensive limbs in the first half, Robins, with his explosive pace and unerring ability to finish from even a quarter chance, will more than likely capitalise in the second.

The Gunners looked comfortable from the off, and, after half an hour, had begun to realise that their opponents, neat and tidy as they undoubtedly were, didn’t have too much to offer as an attacking threat.

So, when a free kick was awarded which Nigel Winterburn delivered towards the far post, it was no surprise to see Steve Bould – pushing much further forward than he might have done against more esteemed opponents – make a quick run into the penalty area, and head home the opening goal despite some very personal attention given by Ian Butterworth.

Barely ten minutes later, Arsenal were 2-0 up. Now it was another fullback, Lee Dixon, making a run into the Norwich half, and, with little or no attempt to close him down made, played the ball into an almost identical area to where Bould had been successful earlier on. This time his low pass found Kevin Campbell who turned and beat the unfortunate Butterworth before calmly slotting the ball past Gunn.

2-0 and game over already? Norwich City were alive but they weren’t doing a lot of kicking.

Arsenal comfortably held onto their lead until halftime and into the second half. And, with around half an hour to go, all seemed as it should be in English football. Arsenal were winning whilst ‘plucky’ Norwich were losing.

Sky’s brave new world seemed, to Norwich fans, as looking like nothing more than the preservation of the status quo, albeit in shiny new wrapping paper.

Wrapping paper that was red and white.

And then, at about 4:15pm on that hot Saturday afternoon, Mike Walker gave Robins his debut, coming out with, in the process, his version of the old ‘… two goals down son, half an hour to go, make a name for yourself, go and win it for us…’ line.

Whatever he did say, Robins’ arrival on the Highbury turf led to the game turning in such a significant and unexpected manner, for all parties concerned, that the final third of the game turned out to be, in my opinion, one of the most significant in the history of the club – a fact that is as relevant today as it was 30 years ago.

Had Robins not had the impact on the game he did, had Norwich proceeded to their expected defeat, no one would have said anything. Nothing was expected of the fixture or the players – they had turned up, done (undoubtedly) their very best, but succumbed to a better side.

Thus there was no momentum to take into the next game, one which could as easily end in defeat as this one had done, thus precipitating another mediocre season that saw the club finish, at best, near the bottom of the table.

No heroics, no European run the following season, no time in the sun for players like Jerry Goss and Bryan Gunn, no near canonisation of Mike Walker, and no resultant high expectations from the fans in just about every season since that one.

Robins’ arrival on that pitch had the same sort of effect on the game and his teammates that water gives to potassium when a little piece of it is dropped into it. It gave the game momentum and the Canaries some fizz.

69 minutes. David Phillips takes a free kick for Norwich, close to where Winterburn had taken his in the first half. The lofted ball into the Arsenal penalty area is similar, as is the end result; Robins swiftly making his move between Smith and Dixon to place a diving header beyond Seaman.

72 minutes. Goss plays a speculative high ball across the Arsenal penalty area, towards Seaman’s far post. The keeper should really collect, but he hesitates, leaving Phillips to steal in and lift the ball past him and into the goal.

82 minutes. It’s Goss, again on the Arsenal right, this time he plays a through ball along the ground that Dennis Bergkamp would have been proud to call his own, allowing Ruel Fox to dart in ahead of the lumbering Bould, beating Seaman at his near post.

2-3, and all four goals so far have originated in the same area of the pitch, with two of Norwich’s three down to goalkeeper errors – but who cares.

84 minutes. Awarded a free kick on the edge of their penalty area, Seaman plays a long, high ball up to the edge of the Norwich area. Phillips and Smith challenge for the header, the ball is cleared and falls to Rob Newman who lifts a high up and under back in the opposite direction.

As the ball descends, it is Tony Adams’ to clear and he really ought to deal with it, but, inexplicably (or perhaps not?) he fails to control the ball and it bounces off his chest and away, free of him and the watching Bould. Robins duly strikes, pouncing on the loose ball and lobs the ball over Seaman from nearly 30 yards for his second and Norwich’s fourth.

2-4 and, at this point, the Arsenal fans, clearly confused, are simultaneously booing their own team while applauding Robins for the skill and anticipation shown.

Norwich City sit atop the very first ever Premier League table, an honour and distinction that can never be taken away from us. A league table, of course, after just one game is an irrelevance, a curiosity and certainly nothing to be taken seriously.

Most football “people” say that no league table has any significance until Easter, so those fledgling Premier League stats for the first day are disregarded by most, never-the-less, TV and newspapers alike produce that first league table and it duly does the rounds with Norwich City on top.

And if it was such an irrelevance, then why bother printing it in the first place?

Needless to say, events at Highbury are the day’s talking point within the game. On Radio Five, the BBC’s Charlotte Nicholl brought shame to her profession by describing Robins’ second and the game’s final goal as a ‘hoof’.

The pass towards Robins may have been one, but the finish was not, it was sublime. Was she even watching the game?

As for Match of the Day? Admittedly, they had to break their previously unwritten code about ignoring Norwich with highlights of all of the day’s games now being featured. Hence the action and goals were duly described by a bored-sounding Ray Stubbs who, when describing Norwich’s third goal, said that Mark Robins had been sent on by Norwich manager “Ian Walker” to score a couple of goals.

The corporation had featured the Norwich game (Stubbs called it the “shock result of the day by far” in the sort of tones you would normally expect at a funeral!) but had, at least, swiftly resorted to type by demonstrating the sort of lazy research and journalism that Norwich fans have come to expect from the national media.

At least they’d know who Mike Walker was by the middle of the season.

After the game, and wearing a rather fetching terracotta blazer that might have come straight from the wardrobe of Sky presenter Richard Keys, Robins, in a brief interview admitted that “… the pressure is on me now isn’t it? Hopefully the lads will keep on winning”.

The quiet smirk that could clearly be heard coming from the interviewer as Robins spoke was telling, as far as that presenter and, quite possibly, everyone else was concerned.

Norwich had enjoyed their fifteen minutes of fame and would now settle down to being anonymous again; their act of footballing blasphemy at Highbury tolerated, if not quite forgiven.