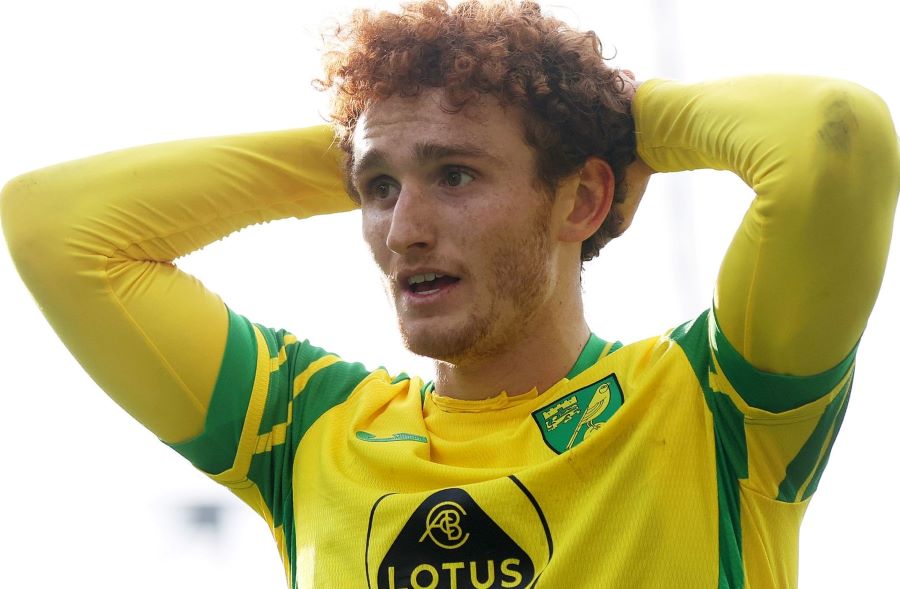 So first the good news – spoiler alert – a City left-back survived the game without injury!

Before the game though, the not-so-good news was that Teemu Pukki was not even in the squad – Dean Smith reported afterwards that the X-ray revealed no damage but that his foot was still too swollen to wear a football boot.

So, as predicted, Kenny McLean was in at left-back and Liam Gibbs into the holding role. Josh Sargent replaced Pukki while Danel Sinani replaced Milot Rashica in the starting XI.

From the off, the changes almost paid dividends. McLean played a ball to Sinani who cut inside and delivered a cross onto the head of Sargent who headed just over.

With Huddersfield pressing high, City moved out of defence and worked the ball forward to the right.  It was a familiar story a spell of possession in a threatening area ended without the ball being delivered into a threatening area.

On five minutes though, City had what they have craved for so long – an early goal.

Max Aarons made an excellent tackle and played the ball to Kieran Dowell, who moved forward and played the ball into the space behind the full-back for Sinani to run on to. The Luxembourg international cut back and delivered a perfect ball onto the head of Josh Sargent who headed across the keeper and in at the far post.

It took until the eighth minute for Huddersfield to put together a spell of anything resembling possession, but it didn’t last long. It was all City as they poured forward.

For the first time this season, there was a good pace and rhythm to the passing. The ball moved quickly with some good one-touch exchanges. There were also some good balls into the box but the excellent Lee Nicholls seemed determined not to allow any more headed chances.

When Huddersfield did break, Gibbs made a superb covering tackle to halt the advance.

A skipping, swerving run by Marcelino Nunez found Dowell. His one-touch pass played Sargent through but the American appeared to miss hit the ball, which then deflected off a defender. Sinani picked it up at the far post. His first touch took the keeper out of play before turning and blasting home from close range.

Nunez showed his skill again moments later with what is becoming a trademark shuffle on the left to retain the ball when challenged by two visiting players. Huddersfield eventually got the ball forward though. Ward’s shot was saved by Krul and fell at the feet of the City defence and was cleared after a few anxious moments.

City were combining well as an attacking force. Sinani and Aarons on the right seem to have developed a good understanding, as have Nunez and Dowell. Cantwell V2.0 was his usual energetic, committed self and did his work tidily and neatly.

Up front, Sargent was defying the critics, making some good runs – Aarons threaded a ball to him only for his shot to be saved at the near post.

Even the much-maligned McLean was doing a job at left back, only being beaten once in the opening period – Hayden nicking in front of him to play across to Ward who hit a curling shot high and wide.

On 36 minutes, Gibbs made contact on the edge of the area and a free kick was awarded. Nakayama hit it over the wall for Krul to save both the shot and the subsequent cross back into the box.

Krul then bowled the ball out to set up a rapid City break through Aarons and Sinani. Their passage was blocked in the corner and the ball was recycled, only for a City foul to end a promising move.

On 42, Huddersfield moved forward in numbers but the attack was thwarted and pushed wide before Aarons conceded a clumsy free kick. The ball was played awkwardly under the crossbar but Krul clawed it away before Cantwell volleyed clear.

There were no changes for the second half and City were straight at Huddersfield. Sargent broke away and played Nunez in – his shot was saved at the near post but was flagged for offside.

Minutes later, Dowell won a midfield duel and passed to Sinani. He moved the ball quickly to play Sargent through on goal. Lees cleaned him up and left the referee with no choice but to brandish the red card.

From then on, the game curiously never really got going again. City, as expected, dominated the possession but their play lacked the pace and penetration of the first half. There were some good moves but few clear-cut chances.  When they came, they found Nicholls in position to save comfortably.

On 61, City got a warning. Gibbs underplayed a ball to McLean and it was intercepted. Somehow the cross cannoned off Thomas’ boot, hit his head and ballooned harmlessly wide.

Smith rolled the dice on 67. Dowell, who had had an excellent game, was replaced by Gabriel Sara and Jordan Hugill replaced Sargent.

City had a spell of increased threat – Cantwell played a great ball to Sinani who screwed his shot wide. Then an Aarons cross found Hugill’s head only for Nicholls to save. The ball came back in and was headed clear where it found Sinani who hit a dipping shot just over the bar.

It was to be his last action as he and Nunez were replaced by Onel Hernandez and Aaron Ramsey.

The Cuban was straight into the action. A long ball forward, Hugill played it through to Hernandez who then ran out of ideas. He eventually cut inside and hit a low shot that was saved by Nicholls.

On 78, the game changed. A Ramsay corner was sliced by a defender at the near post. Hernandez made a good turn but his ball was cleared. It came upfield to Huddersfield substitute Jones who ran Hanley into the box, turned him and slotted past Krul.

City were left with an awkward 12 minutes to negotiate.

And they succeeded. Just.

Hernandez used his pace as an outlet. Milot Rashica came on to do the same on the other side, whilst Huddersfield through caution to the wind in search of an equalizer. A great City counter cut the visitors wide open, Gibbs cut back and his ball was agonizingly behind Hugill with an open goal beckoning.

When the final whistle went, the first reaction seemed to be a mass release of held breath, before the celebrations began.

This was a crunch game for City and Dean Smith. For the first 30-40 minutes they looked bright, threatening and dangerous. Everybody played well.

After the break, and especially so after the red card, they were guilty of playing the ball too slowly and looking for the Hollywood long diagonal balls, rather than moving it forward quickly and simply. The crosses that caused so many problems in the first half faded away.

Yet City prevailed. It was a win. Convincing at times yet I’m left feeling that we should really have put a poor Huddersfield side to the sword.

However, much like the Farke season in 2020, it is a baby step forward again. Another home game to come and a chance to build some momentum.