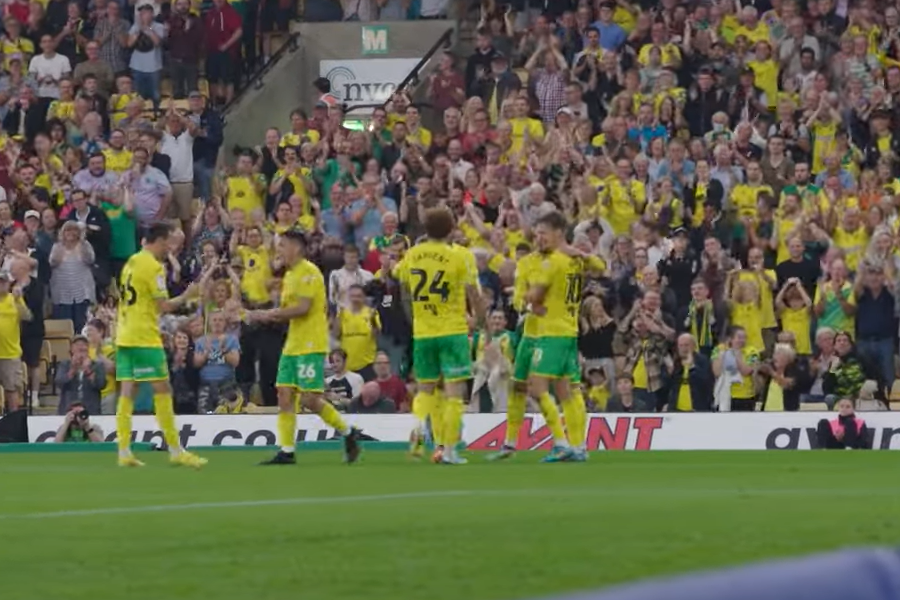 City picked up their win of the season after a rampaging start saw off Huddersfield, before slightly letting them back in with a bit of second-half complacency. This analysis will seek to dissect the match and draw out any themes from the game.

In general, it followed the pattern of every Championship game so far for Norwich. The action zone diagram below shows the field tilted towards the opposition’s goal; Citys domination of the ball and most of the territory, becoming a familiar scenario. This time though the Canaries were able to make the most of this domination and create some high-quality chances.

I will look at the fluidity behind a target and how this aided chance creation, the passiveness of Huddersfield, how City’s structure allowed for sustained attacking, and, finally, the fallibility that Norwich possesses on the defensive transition.

Norwich had an uptick in the quality of chance they were creating in this game. An xG of 2.45 is the highest they have produced so far this season. Key to this was the fluidity with which the four in midfield interchanged in the half-space, which allowed for the creation of space as Huddersfield didn’t know whether to go with their designated man or stay in the position.

As shown above, in the average position map, the midfield would look to roam to find the space. The creative players would look to go and find the ball in the half-space, which is the most advantageous area to produce a high-quality through ball and as a result create a chance. Todd Cantwell enjoyed this level of freedom, popping up all over the pitch in possession.

Another factor that greatly improved Norwich’s threat was having a target to aim for in Josh Sargent. Teemu Pukki has the exceptional timing of run and off-the-ball movement, which makes him far too good for the Championship – and when he gets fit he certainly should start over Sargent – but what the US international offers is the ability for City to vary their attacks.

He is a threat aerially and in the Championship against a low block, it is an essential weapon in the arsenal for Norwich. He was selfless off the ball too, working hard for the team, and the occupying of the centre-backs allowed this fluid movement from midfielders.

The next point was City’s structure that allowed them to sustain attacks and have Huddersfield camped into their half. This is shown by the number of attacks we had per minute comparatively. This was due to a mixture of Huddersfield lacking an outlet to relieve pressure on their defence and the intensity with which Norwich did their counter-pressing.

As shown, Huddersfield struggled to get out from their half and create significant attacks. They sat deep and looked to limit space but, unlike other sides that have faced Norwich, they lacked ball carriers, or a long ball option, so really struggled to relieve pressure. This allowed City to pen them in for most of the game.

The other element that allowed City to sustain their attacks and, as a result, dominate the game was their excellent counter-pressing when they misplaced a pass. This is shown by the low PPDA (passes per defensive action) numbers throughout the game – a metric that looks at the quality of pressing a team does.

So having a low PPDA meant Huddersfield were unable to complete many passes before a defensive action, meaning Norwich limited them greatly. The effective counter-pressing was due to the desire shown from the forwards and midfielders alongside committing a great number of players to that first defensive action. This did however leave the defensive midfielder exposed, which leads me to the final element I drew from the game.

Struggling on the defensive transition

I tweeted (follow me on Twitter @rbecks17) at halftime, that for all the excellence Norwich had shown in that first half, without mobility in the defensive midfield position they would always be open and allow opportunities for the opposition to create.

This is again down to two aspects: firstly, the structure Norwich are looking to employ exposes the defensive midfielder when the first press is unsuccessful, and secondly, Liam Gibbs’s own defensive positioning and mobility left us exposed at times.

An aggressive counter-pressing approach from the two 8s in the midfield (Núñez and Dowell) means that if the opposition has the required quality to resist this press, then it leaves the defensive 6 exposed in the transition. Thankfully, Huddersfield were lacking this quality most of the game but on the few occasions, they were able to resist the press they created chances relatively easily.

The other element to this was Gibb’s positioning and lack of mobility. I like him as a player and think he is more than good enough to play at the Championship level but I do think that he has been mis-profiled as his best position is not as a lone 6 in a single pivot system.

For me, he would look even better with another 6 next to him. He often plays slightly too high in possession, which means the defence doesn’t have the appropriate protection and he lacks the mobility to close space. This was especially evident when Huddersfield scored their goal as shown below.

Gibbs pushes up too high and as City miss the first pressing action, the back line is then exposed with him lacking the speed to close the gap. Huddersfield then drive up the pitch relatively unopposed and produce a bit of quality for the finish.

I said in my previous analysis that City were not far off clicking into gear and getting results and am pleased to see that was not far off. Watching the Huddersfield game, I was even more convinced of this.

City possess a wealth of talent at this level and having the appropriate systems to control games means the quality will shine through and we will win a lot of games, especially at home. The combination of attacking fluidity and aggressive pressing is a deadly combination and teams will hate playing Norwich if this can continue.

The final piece of the puzzle for me is getting that mobility in defensive midfield. I think Gibbs is an excellent player but the security we will find from having a player with the profile of Isaac Hayden will make a massive difference to our defensive security.

Gibbs was excellent in possession though and it begs the question, can Hayden provide that same progression? We won’t know the answer to that until we have seen him play in this system.