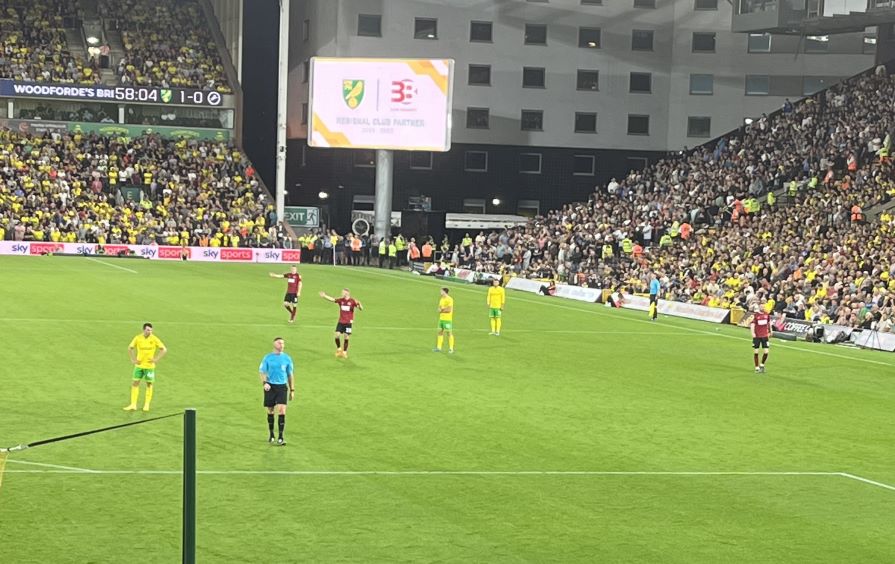 Not for the first time, I have to open with an apology.

Prior to the Huddersfield game, when discussing on Twitter who should slot in at left-back, I jokingly suggested that as said emergency full-back was almost certain to roll his ankle and be out until Christmas we should consider playing Josh Sargent there.

It wasn’t funny at the time and now just sounds ridiculous.

But while my jokes (that one in particular) are rarely funny, football as a game, as Greavsie once told us, most definitely is.

In the aftermath of defeat at Hull, the calls for Dean Smith’s P45 resonated loudly and those making those calls felt they had a compelling argument. Those of us trying to plead for just a little more patience found our lines of defence to be thin and unconvincing.

But roll the clock forward six days and City have collected the same number of points by virtue of two performances of promise. It’s still far from perfect and there is plenty of scope for improvement, but that winning feeling is something money can’t buy.

From a team that had forgotten how to win, and which looked fragile and vulnerable to the slightest of setbacks, to a team that’s threatening to develop a winning habit. The mood music has changed.

And while Dean Smith will never convince some, there are signs he too is starting to settle and is finally getting his message across. For almost the first time, we’re seeing signs of how a Smith/Shakespeare team plays and – while I’ll not be thanked for saying it – it does contain shades of Farkeball.

When asked by The Athletic what type of football he wants his sides to play, Smith said, “Forward-thinking, forward-running. Good possession, moving the ball quickly … when we lose it, how quickly can we go and win it back, and setting traps for the opposition.“

All of which is a fairly good summation of how City played last night, especially in the second half when the ball was moved a couple of beats quicker and there was an extra body or two getting ahead of the ball.

The intricacy involved in the construction of the first goal was of a Buendia-Stiepermann-Vrancic vintage and was just what was needed at that time.

After a largely uneventful and frustrating first half, it was always going to take something quite special to break down Millwall’s gutsy and well-organised defence. And so it proved.

The link-up between Danil Sinani and Kieran Dowell showed promise before the break, but burst into life with that lovely one-two, which opened up a channel for Sargent. The ball to him from Sinani was perfectly weighted and the finish was of a player whose confidence level was already on the rise.

Go back a fortnight and that chance is either snatched at or scuffed, but last night the finish was one of a proper centre-forward, which I guess is in itself the answer to the Sargent riddle.

He was purchased as an out-and-out striker, has always played as one and so, lo and behold, when we play him there he looks a different player. And then there’s that priceless commodity – confidence.

If only it could be bottled, or coached.

When Sargent was brought down by Tom Lees on Tuesday night and the Huddersfield defender was red-carded, I commented to my Carrow Road neighbour that he needed have done so. Sarge, for me, would have found a way to miss because he had time to think.

Last night, when sent clear by Dowell after he’d salvaged the ball from Andy Omobamidele’s hoof, Sargent’s body language told the whole of Carrow Road he was about to score. Sinani had also made a run and was there for the tap-in if needed, but no way was that ball being squared.

To see that Barclay End net ripple for the second time was a thing of beauty.

Even then there was still work to be done because, as Swansea found out on Tuesday night, this Millwall side knows not when it’s beaten.

So let’s not underestimate the save from Tim Krul when he turned that fizzer from Voglsammer onto the crossbar because that goes in and we’d have been back into the realms of buttock-clenching.

And there was still plenty of time for the Hanley/Afobe wresting match to reach its denouement, with the Scot winning by a submission. For lovers of old-school centre-forward/centre-back muscle-fests it was one to savour – and one Hanley will have enjoyed.

While our very own Braveheart has adapted well to the phenomenon of ball-playing centre-backs, he still looks more at home when faced with an opponent with whom he can go toe-to-toe.

As for Omobamidele – him of the hoof that led to the second goal – that was his most assured performance yet in a yellow shirt. He was composure personified with bravery and guts thrown in, to dovetail with his quality with the ball at his feet.

He’s a Rolls Royce of a defender in the making – one we should make the most of while we still can.

But there were plenty of good performances scattered across the park, and when everyone is fit, Smith has some serious decisions to make and for all the right reasons.

No one displaces Liam Gibbs on this form, not even our current emergency left-back, and when fit, Isaac Hayden too may even have to bide his time, such has been his growing influence in the heart of that midfield.

The key for 19-year-olds is finding a level of consistency and when that dips, then the door opens up for others, But for now the #6 position is Gibbs’ to lose.

Onel Hernandez is another who repaid the trust of his head coach. While in the attacking third, he was the usual mix of energy, scampering, stepovers and overhit crosses, the other part of his role last night – to provide some defensive support to McLean – was delivered effectively.

There was even time for some impressive late cameos from Messrs Cantwell and Ramsey.

So, a good night and, as Chris Goreham mentioned when closing Radio Norfolk’s coverage last night, for the first time since the first lockdown in March 2020, Carrow Road is starting to feel like it could be a fun place to be again.

The old place hasn’t rocked for a long time but it did last night.

Early days of course, and still plenty of opportunity for it all to go wrong, but there are smiles on faces again and that can only be a good thing.

Enjoy it. It’s been a while.