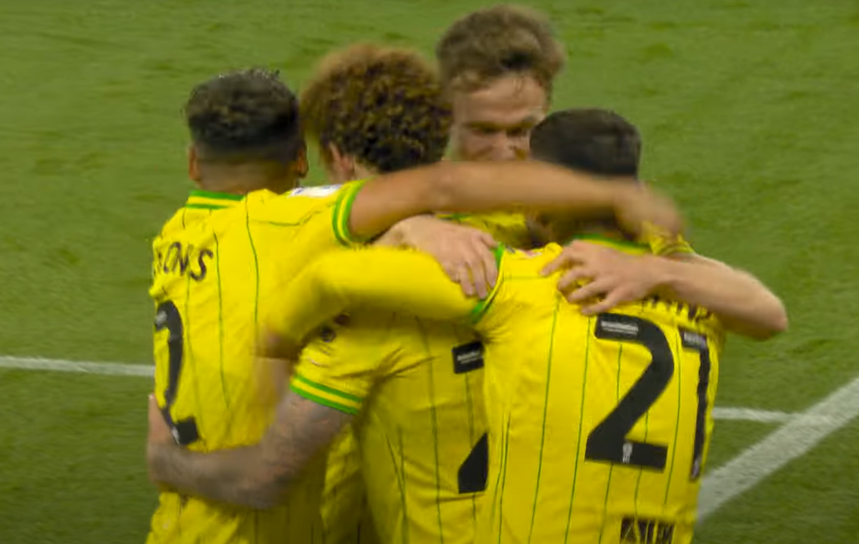 Dean Smith has made a point of saying that he will pick ‘horses for courses’ this season.

Last night he preferred the muscularity and pace of Onel Hernandez to the more subtle approach of Todd Cantwell. Other than that, Teemu Pukki for Jordan Hugill on the bench was the only change from the victory against Huddersfield.

Cardiff aside, the season has been characterised by blistering starts from City but Milwall made it clear from the start that they were not going to allow this.

They pressed high and hard, forcing Tim Krul to kick long. Josh Sargent struggled against the power of the Millwall back line and, as a result, City found it almost impossible to get a foothold in the game.

At the other end of the pitch, Grant Hanley and Andrew Omobamidele were on hand to ensure Benik Afobe barely got a look in.

City had moments of good play. After six minutes, Liam Gibbs laid it to Kieran Dowell who exchanged a 1-2 with Danil Sinani only to shoot wide.

After nine, a City corner was met by Kenny McLean who put a free header well wide.

Millwall were energetic though and it took until 13 minutes for City to have anything that looked like controlled possession, but ultimately it came to nothing as Sargent was muscled off the ball.

Slowly, steadily, City began to have a little more of the ball. On 18 minutes, Sinani capped a slick move with a through ball to Sargent. He turned well before being brought down on the edge of the box, earning Saville a yellow card. From the free kick, Marcelino Nuñez could only hit the wall.

A minute later, another foul on Sargent. Another free kick, this time wide on the right. The ball was played in with pace. Sargent got a flick but was only able to play it across the goal, ahead of the stretching Omobamidele.

Millwall hit back. Max Aarons was beaten on the left by Burey but his cross was behind Honeyman.

On 25 minutes, Onel Hernandez used his strength to retain the ball on the left before Nunez played a superb cross-field ball to Sinani. He cut inside but couldn’t get his cross away.

By now, City seemed to have the measure of the Millwall press. McLean had realised that he was the subject of the onrushing McNamara and took to calmly moving inside and playing the ball away with his right.  Having someone so calm and assured on the ball at full-back was paying dividends.

Up front too, Sargent was beginning to win his battles, yet for all the incremental gains as the half wore on, it was the same old story in the final third. City were not decisive enough, could not find the killer ball and were moving it too slowly.

Into the second half and an immediate change in intent was signalled. Nuñez and Hernandez combined well with the Cuban electing to go past the defender and deliver a left-foot cross for the first time.

Millwall hit straight back. A long ball found Afobe beating the offside trap. Hanley caught him, then made the tackle to clear for a corner.

City came forward again. Dowell battled well to win the ball, which was worked across to the left where Hernandez won another corner. This time it went to McLean at the near post but his effort was cleared.  The tempo of the passing was much higher, and City were much more direct in their attacks than in the first half.

On 49 minutes, the good work paid dividends. Dowell found Sargent, who then exchanged passes with Sinani before rifling home past Bialkowski.

Minutes later, City were pressing again. A lovely drag-back by Nuñez in midfield before he played a cross-field ball to Sinani. He fed the overlapping Aarons whose cross was blocked for a City corner. This one was a great routine, Sargent came around the back but could only head across goal.

The American then nearly secured his place in Norwich City fokelore. He charged down Bialkowski before flicking the ball goalwards with the outside of his boot, only for the former Ipswich keeper to scramble back and scoop the ball away.

Millwall made a trio of substitutions on 69 minutes, bringing on Shackleton, Flemming and Voglsammer – all of whom subsequently looked dangerous.

On 70 minutes, Gibbs, who was putting in another impressive performance, showed good strength to shrug off the Millwall midfield and set Hernandez away on the left. This time his cross was more wayward and went out on the right for a throw.

A minute later, Nuñez was penalised for what looked like a perfectly decent tackle. Inevitably Millwall pumped the ball forward. Gibbs initially did well, forcing play out wide and when the ball came in, it bounced around before being hoofed clear.

On 73, Nuñez was involved again, this time covering at left back and forcing a throw-in.

Millwall put a long throw into the area which again was cleared. The ball came to Sargent among two Millwall players, one of whom had a good handful of the American’s shirt. Somehow Sargent won the ball and it fell into the path of Dowell on the left. He broke with pace before slipping it through once again to Sargent.

The American did not even break his stride as he rifled the ball in to double the lead.

Cantwell and Ramsey came on five minutes later to replace Dowell and Hernandez, and City began to look to take the sting out of the game.

It almost backfired as Flemming nicked the ball in midfield. McLean lunged to intercept the pass and missed but the recovering Omobamidele did so well to put the ball out for a corner. Somehow, from the subsequent ball, Afobe put it over from close range.

Then, out of nothing, Voglsammer found room for a dipping shot that Krul was alert enough to tip over the bar.

Smith then replaced Sargent with Pukki, to chants of U-S-A from the crowd, followed equally by Teemu Pukki Baby!

The game slowly drew to a close. Krul earning a yellow card for time wasting during the four added minutes but in the end, City were able to comfortably see it over the line for a win and a clean sheet.

I was quite impressed. The way that City adapted to the Millwall tactics and gradually grew into the game, before fully imposing themselves in the second half was good to see.

Sargent was superb. There, I said it! Would I drop him for next week? Heck no!

Smith is finally being forced into the best kind of selection dilemma with all the players showing their worth. And so nice to hear, once again, the Barclay and Snake Pit in full voice singing ‘up the football league we go’.