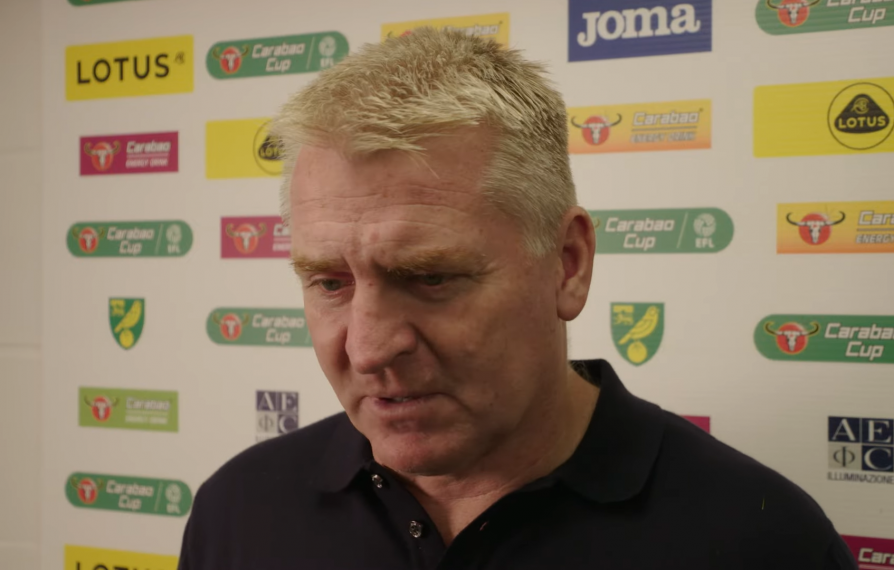 So, our Carabao dream is over for another year. There will be no re-run of 1985.

In reality, of course, we knew that before we’d even kicked a ball. Unless the inhabitants of that exclusive club known as the ‘big six’ bugger off to that European Super League they so crave, the likelihood of a team of mere mortals ever winning it again is virtually non-existent.

As things stand, the winners of this, or any domestic, competition will invariably come from said group of elites and that’s only if/when Pep decides to give one of the other five a turn.

So, no great loss to depart the competition (sorry Kathy) although any defeat comes with an element of pain, especially when it’s inflicted upon you by Bournemouth and doubly so when you were winning 2-1 two minutes into injury time.

But, as Dean Smith alluded to afterwards, we can have no real complaints. Despite leading twice, Bournemouth were the better side on the night and deserved their win, even if it did come in the end via the width of the Barclay End crossbar.

Todd Cantwell, in trying to recreate the spirit of the Tottenham Hotspur Stadium March 2020, ended up slightly overdoing the casual indifference part, with his well-struck penalty from virtually no run-up slamming into the crossbar instead of the roof of the net.

And that was pretty much it.

Angus got close to a couple of Bournemouth pens but not close enough and so it will be the media darlings of Sandbanks rather than the pains in the @rse from Norfolk whose shiny ball gets rummaged at 9:45pm tonight.

With Smith making ten changes from the team that beat Millwall and Scott Parker making the same number after their walloping by Arsenal at the weekend, the win for the Cherries was proof, more than anything else, that they currently have more strength in depth than City.

“Young at times” was how Dean Smith described last night’s team, which I took to mean a bit naïve, and included in that grouping was“AJ” – aka Aaron Ramsey.

While it seemed perfectly reasonable to put Jonathan Tomkinson and Tony Springett in that category, and Ramsey is undeniably young, the fact that the latter has been brought in from a big club and has been lauded as a star of the future, means we’re expecting a little more from him.

The general consensus is that those brought in on loan are done so in order to strengthen the group, not (as least from a City perspective) to offer the player experience on behalf of his parent club.

Given that bringing in Ramsey has been perceived by some as Dean Smith doing his old club, (and the club he supports) a favour, then it probably wasn’t the best choice of words.

I’m still hopeful the lad will be able to provide us with something that we don’t already have though and that those trotting out the above line will have to eat their words, but we’re still waiting for that to happen.

Early days though – Ramsey didn’t have his first Colney training session until 16 days ago – so let’s not be too harsh too soon. Equally, his coach for the next ten months needs to not make it sound as if this is merely us babysitting for Villa.

But, semantics. Dean has enough folk on his case without me joining in. So I won’t.

On the whole, despite exiting the competition and experiencing that unpleasant and too-familiar sight of our back-four getting bullied, there were some good things to emerge – not least the form of Gunn.

His superb shot-stopping must mean he’s now pushing Tim Krul hard, and a mistake or two or a departure from the Dutchman (neither of which hopefully won’t happen) and Dean Smith has one waiting in the wings ready and willing to grasp the opportunity.

Also, the fact that three of our four strikers whose names aren’t Josh Sargent either scored or contributed to a goal was another big fat plus, as was the fact that Gabriel Sara got 90 minutes under his belt.

In particular, the belated Pukki/Idah partnership gave off vibes of those heady days of January when we went three games without defeat and looked – whisper it – a little dangerous in front of goal.

So, not all bad. Just a shame it had to be at the hands of Bournemouth.

But would I swap defeat on pens to them in the cup for a win at the Stadium of Light on Saturday?

Too damn right I would.