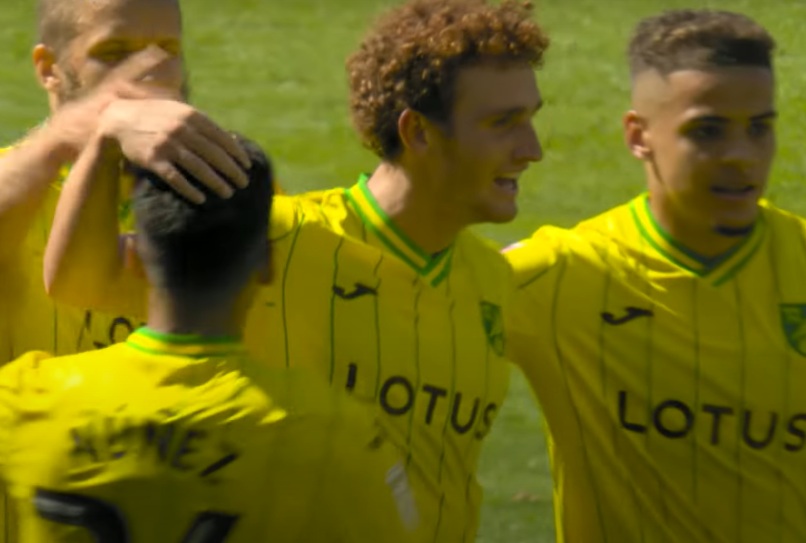 Let’s ignore the Carabao Cup and say that City came into this game on the back of two consecutive wins.  Before kick-off, the attention was on the absence of former City Boss Alex Neil, seemingly on his way to Stoke.

City lined up unchanged – from the last league game that is. And the game started in a similar way.

Sunderland were quick out of the traps and took the fight firmly to City. It was immediately apparent that the 3-5-2 formation was going to cause the Canaries problems, particularly with the high-energy press employed by interim coach Martin Canning.

For the opening 10 minutes, City barely had a sniff, and when they did they spurned their chances – a promising free-kick was driven straight into the face of former City player Pritchard.

City were being forced to bypass the midfield and try to play longer balls out from defence and Josh Sargent was unable to impose himself physically against the back line. Only Onel Hernandez seemed to offer any sort of opening.

On 13 minutes he was played through, cut the ball back towards Sargent and the American hit a firm shot that was palmed away by the diving Patterson.

Only a few minutes later, Liam Gibbs went in for a challenge and appeared to roll his ankle awkwardly. He tried to carry on but within a few minutes but was soon replaced by Sam Byram who slotted into left back, allowing Kenny McLean to revert to his preferred midfield role.

City gradually worked themselves into the game, but never threatened any sort of control, Most attacks relied on bypassing the midfield.

Once into Sunderland territory they were able to exercise some semblance of control and create any decent chances.

City were still making it difficult for themselves, all too frequently choosing the wrong option and returning possession to the home team who, thanks largely to some superb defending by Grant Hanley, were unable to capitalize.

Even as late as 46 minutes, a cross-field ball was met by Max Aarons who elected to direct his header infield, straight into the path of the onrushing Sunderland attackers.

Moments later, Marcelino Nunez did well to win the ball initially but then got caught heading towards his own goal. He lost possession but managed to deflect the ball for a corner.

As the subsequent corner was cleared, Corey Evans hit a great shot from which Hanley made a great saving header.

At half time it was evident that the City midfield was not at the races, and that Sargent was too isolated up front – Hernandez was too wide to support him and Sinani nowhere to be seen. Sunderland had created a hatful of chances but had been unable to convert them.

A job for S&S at halftime.

Kick-off saw a return to the ‘lump it high and wide’ tactic seen so much last season and within two minutes, Sargent had been penalized in his battles with Batth and Cirkin.

Moments later though, he did better, chesting the ball back enabling City to build a move forward before it inevitably broke down.

But City were looking slightly brighter. Byram took the ball on the left, fed it into Sargent who then laid it to Nunez. His shot was comfortable for Patterson in the Sunderland goal.

On 53, Nunez had another chance – a corner headed clear before the Chilean curled a shot just wide.

Sunderland weren’t finished. They struck back through Stewart at close range. Tim Krul somehow deflected his shot onto the bar before Hanley once again blocked from Alex Pritchard.

City then broke with Dowell, who held onto the ball way too long and the attack came to nothing.

On 60 minutes, Teemu Pukki, Todd Cantwell and Aaron Ramsey came on for Dowell, Sinani and Hernandez, with Sargent reverting to his wide role, Ramsey to the left and Todd slipping into the number 10 position.

The difference was almost immediate.

Sargent was better able to impose himself and the movement of Pukki was pulling the defence all over the place.

City won a corner when Nunez set Aarons free on the overlap. As the corner was played in, Byram went to ground with the Sunderland defender clutching a good handful of shirt. Nothing was given though.

Sunderland broke back. Cantwell, tracking back put it out for a corner. A curling ball was played in for Simms to head across goal where it brushed the post and went wide.

On 71, Ramsey plucked the ball from the air well, playing Nunez through but he held the ball too long when instead he should have threaded Pukki through.

The substitutions had made a big difference and City were finally able to retain possession more comfortably.

Eventually, the ball came to Pukki in a tight position on the edge of the box. He touched it to Nunez who played it into space for Ramsey to put in a dangerous cross. And there he was, man of the moment Sargent to sidefoot in from close range.

Minutes later, Sargent, visibly buoyed, had another chance but was blocked, and then had a great turn in the box before being pushed by Cirkin. No foul given.

City were now playing with so much more fluidity and movement. Sunderland’s best chances in the remainder of the game came from set pieces, but they were unable to capilalise.

So this was a battle.  City rarely felt comfortable and had little or no control in midfield until the changes were made, being forced all too often to bypass that area.

Credit where it is due though, the changes dynamized City and ultimately won the game for them.

The defence had a tough day but Hanley proved to be the warrior we know he is and almost single-handedly kept City in the game at times, backed up by Krul with some crucial saves.

The sides that are ultimately successful always seem to find a way to win, even in adversity, and this really felt like one of those games.

Extrapolate that to the end of the season however you like!